We all know that investing in cryptocurrencies could be profitable, should you manage to identify the best entry point. Throughout the relatively brief period of their existence, a lot of digital currencies have skyrocketed in value.

One of the most predominant precursors of the price of a certain cryptocurrency going up is the listing on major cryptocurrency exchanges. This became particularly evident following the boom of Initial Coin Offerings throughout 2017 and 2018.

What If You Invested $100 Back Before Certain Assets Got Listed?

One of the most common questions of novice cryptocurrency enthusiasts is what if they invested back then, when prices were low and before major cryptocurrencies got listed on exchanges.

Well, to satisfy this curiosity, DataLight has come up with a nice visualization of research depicting the cryptocurrency ROI following their exchange listings’ price discovery. 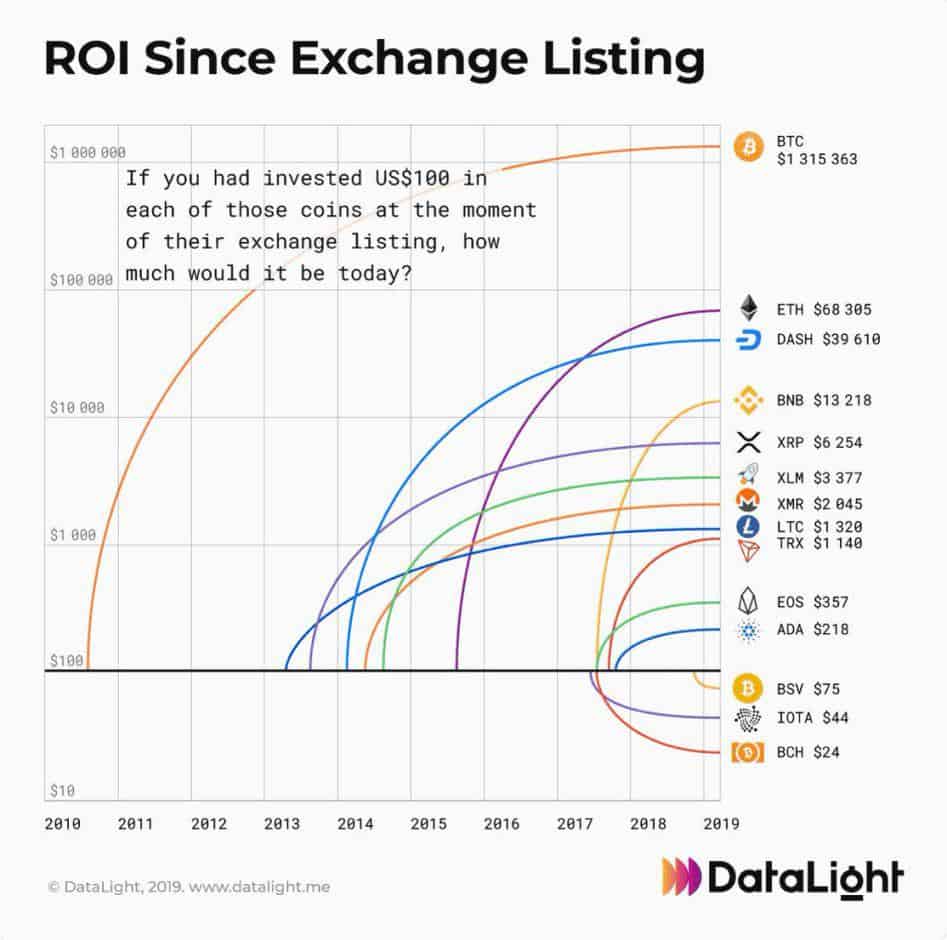 The absolute winner, however, remains Bitcoin (BTC) – the largest cryptocurrency by market capitalization. Buying $100 of BTC early on would have netted you upwards of $1.3M according to DataLight’s research. Keep in mind that Bitcoin is down with about 75 percent since its peak in late 2017.

But It’s Not All Rainbows and Candy

While investing in cryptocurrencies could be profitable, it could also be a particularly unpleasant experience, especially for uninformed or misinformed investors, blindly following hype and speculation.

Data from Cryptopotato’s ICO List reveals that while there are very profitable projects, there are also these which have made their investors nothing but losses.

Tezos, for example, was one of the more popular and successful ICOs, raising over the whopping $230 million, selling tokens at an average of $0.47. At present time, however, Tezos trades at around $0.45, which means that not only would you have not made money, but you’d have lost about 3% of your investment.

What this goes to show is that investing in cryptocurrencies could be particularly profitable, but it could also be devastating. Timing is key and in order to get it done properly, you need to have strong fundamental skills, financial responsibility, and to be well-informed about what you’re investing in.

The post $100 of Investing In Ethereum Would Net $68,305: New Study Reveals Crypto ROI Following Exchange Listings (But, There Is Also The Opposite) appeared first on CryptoPotato.

Bitcoin Price is displaying steady performance now. At the time of writing this, the BTC price is sitting at $23,259.…