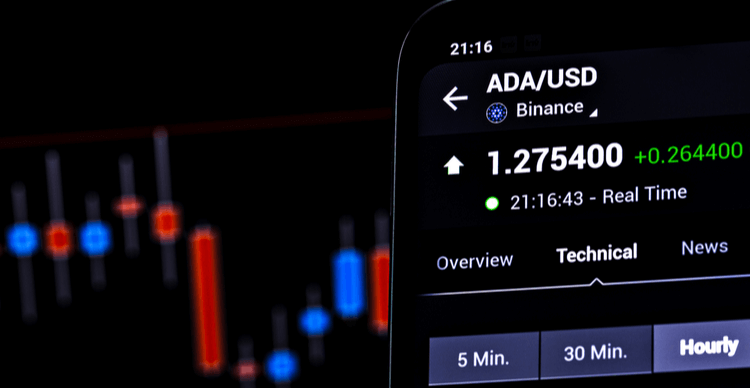 Cardano’s price is up 5% and could jump 24% to reach a long-term horizontal resistance line at $1.48

Like most of the crypto market, Cardano (ADA) is looking to recover above critical support after this week’s sell-off. The price of ADA has increased by 5% in early deals today, adding to the 10% gains seen on Wednesday.

As of writing, Cardano is trading around $1.19 as bulls target sustained momentum towards $1.20.

An upward flip above $1.30 will shed the negative view, especially as Cardano inches closer to its upcoming Goguen rollout. Smart contract functionality, strong on-chain activity, and rising Network Value to Transaction (NVT) ratio could significantly swing momentum in favour of the bulls and see AD’s price soar in the short term.

However, the feeling in the broader market could also play a part in ADA’s near term performance. This will likely be the case if Bitcoin fails to maintain support above $32k as talk of a bear market intensifies.

📈 With #Bitcoin back to $32.1k after falling to $29.4k, #buythedip has been the mantra in #crypto this week. Our data is also pointing to an uptick in #bearmarket discussions, as traders debate whether we’ve pivoted into one after these major declines. https://t.co/kHG2ewtRSG pic.twitter.com/LL8YU3x8Tm

ADA has rebounded off a critical support zone at $1.02 after Tuesday’s downturn, with the bullish flip pushing prices to highs of $1.22. Intraday deals have seen the ADA/USD pair shed some of the gains, although the price is still above an important support line at $1.17.

Above the 50 SMA is a historically important price level for ADA, at $1.48. If price pumps to this level, ADA/USD would have increased about 24% from where it currently stands.

The curve of the moving average is sloping, though, and $1.48 has turned out to be a long-term horizontal resistance line. The zone has capped upward movement four times in 2021 and might prove critical to both bulls and bears in coming sessions.

If bulls retest and manage to break above the hurdle, the next major barrier would be at $1.84 and then $2.30.

From a technical point of view, ADA/USD remains weak within the boundaries of a bearish descending triangle.

As long as ADA’s price fails to breach the downtrend line, bears are in charge (as suggested by the RSI, which sits below 50). The 20-day EMA currently resides within the triangle and another rejection off this average could invite panic selling.

If this bearish scenario were to unfold, ADA’s price could drop to $0.80.

Where to buy Huobi Token: HT rallies 15% despite China crackdown

The eponymous coin of Chinese exchange Huobi has rallied by almost 50% this week, dispelling fears of a government crackdown …

Bitcoin (BTC) is not a bubble – Amber Group CEO claims

Bitcoin will surely have notable value fluctuations in the future, but it’s out of the bubble territory, stated Michael Wu,…