Edmonton-based Cannabis cultivator and marketing firm Aurora Cannabis announced on late Tuesday that it has filed a preliminary short form base shelf prospectus with the securities regulators in each province of Canada to raise up to $750 million in the next 25 months. The Aurora Cannabis press release also mentioned filing a Form F‐10 Registration Statement with the U.S. Securities and Exchange Commission (SEC).

The shelf prospectus to raise the considerable amount of funds will enable Aurora Cannabis to make offerings of common shares and other financial securities to raise the said US$750 million and help execute its global expansion and partnering strategy.

With its recent listing on the New York Stock Exchange and a round of successful financing deals in the U.S. this filing was much anticipated as it will help the company to mature in a global scale, said Aurora Cannabis’ executive chairman Michael Singer during the press release.

Over the last few quarters, Aurora Cannabis had been keen to acquire a number of Cannabis companies. Currently, its list of wholly owned subsidiaries includes a total 16 companies, including MedReleaf, CanvasRX, and H2 Biopharma.

Besides buying up potential competitors, Aurora Cannabis also established a number of strategic partnerships with high profile public companies that provided it with a certain competitive edge and the management was looking to raise additional capital to continue the growth momentum.

While they don’t intend to raise the $750 million immediately, the option to quickly raise considerable funds will keep their options open to make additional acquisitions in the near future if the deal makes economic sense.

“Although we have no immediate intention of drawing capital against this Shelf Prospectus, we have introduced this option as a prudent and long-term strategic measure to provide us with flexibility in access to growth capital, if or when required, to continue executing on our global expansion and partnering strategy,” added Mr. Singer.

Impact of the Shelf Prospectus on Aurora Cannabis Stock Price 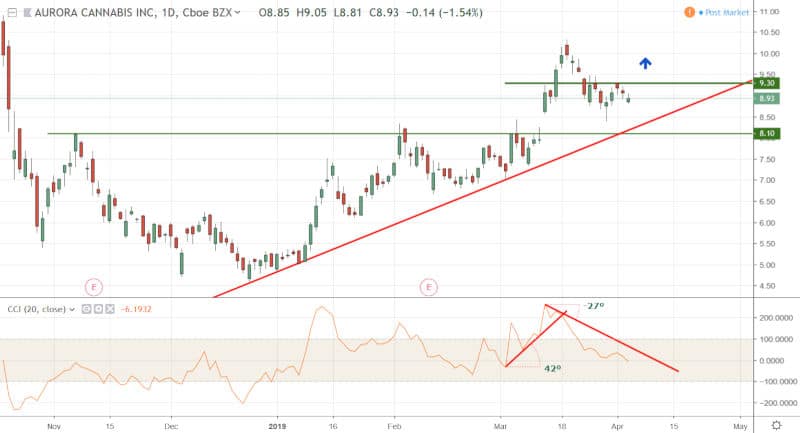 While the stock price of Aurora Cannabis has made considerable gains since the beginning of 2019 and went up by almost 100% to $10.32 per share on March 19, it started a minor bearish retracement over the last two weeks.

However, long-term investors take comfort in the fact that the uptrend line is still intact, and the stock resumed bullishness to test the resistance near $9.30 per share last week. Given the huge potential opportunity associated with capital raised through this shelf prospectus, there should be a bullish effect of this news on the market.

Also, if we take a look at the daily price chart of the Commodity Channel Index (CCI), there is a potential bullish divergence in the making. If we see the CCI turning up in the next few days and the price breaking above the $9.30 per share level, it could signal a sustained uptrend.

Popular cryptocurrency analyst believes that Bitcoin’s price is heading towards $7,200 based on an inverse Head and Shoulders pattern. Interestingly,…

featured – Despite the strict national legislation over cryptocurrency trading, the world community finds new solutions on how to avoid…