Commenting on the new development, Dr. Axel Gille, the Managing Director of Aurora Europe, said that the “successful proposal was focused on implementing the Aurora standard, pharmaceutical grade, and cultivation techniques.”

He went on to say that leveraging the broad competencies of Aurora Europe’s team of architects, engineers, pharmacists, plant specialists, and project management professionals will help the company establish a strong foothold in the European legal Cannabis market in the next couple of years.

The management has previously said in a press release that the state-of-the-art Cannabis cultivation facility will be situated in Leuna, Germany and the construction process will likely commence in May 2019.

“Construction of this new facility in Leuna is the next logical step in expanding our Europe-wide production network to ensure medical patients,” added Dr. Gille.

Aurora Cannabis management said in a press release that it will probably take a year to complete the construction of the new Cannabis cultivation facility. Analysts are expecting that by October 2020, the company will be able to start shipping locally grown cannabis to the German medical marijuana market.

Initially, Aurora Cannabis received approval to produce 4,000 kg of medical marijuana over the next four-year period. However, sources close to the company said the cultivation license will be expanded over time, depending on how the German regulators allow the supply of Cannabis in the local market.

Previously, Aurora Cannabis acquired 51% stake in Portugal’s Gaia Pharma, but with the construction of a new Cannabis cultivation facility in Germany, it will be way ahead of any potential competition in the future.

Since forming a bullish daily bar on December 24, 2018, the stock of Aurora Cannabis has remained highly bullish. Over the last five months, it has climbed up to $10.32 per share, representing a 125.33 percent increase in market capitalization. However, since March 19, the stock mostly remained range bound and went down the test the long-term downtrend line. In the last few days, it seems to be gaining bullish traction and currently, approaching the major psychological resistance level near $9.30 per share. 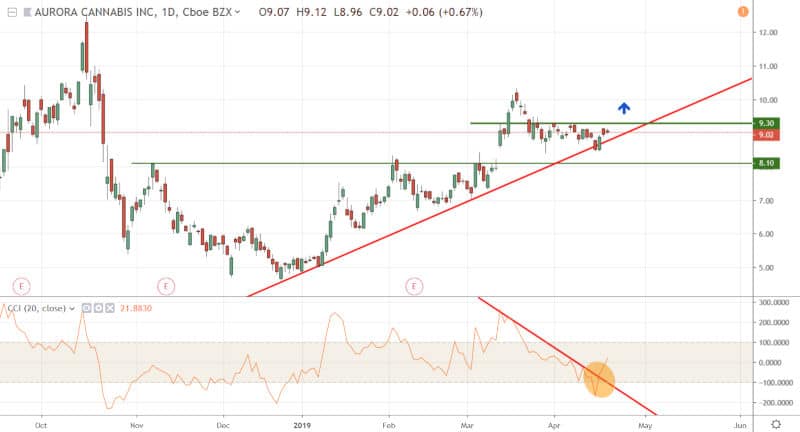 With the latest approval to market 4,000 kilograms of medical marijuana in Germany, Aurora Cannabis has secured a strong foothold in the lucrative European Cannabis market. Moreover, given the Commodity Channel Index (CCI) has already broken above the downtrend line and produced a buy signal, there is a strong possibility that the stock will remain bullish in the coming week.

If we see Aurora Cannabis’ shares breaking above the $9.30 per share mark, it might gain ample bullish momentum to test the next resistance, which is located near the $10.30 per share level.

What is Polkadot? (DOT)

The Polkadot project is garnering a lot of attention nowadays. The reason behind it is the multiple delays of the…

The OMG token is one of the top performers in August! Can the OMG price reach 100$? OMG Price Forecast…