The last time BTC/USD closed below $10K on the weekly and daily logs was July 26.

Bitcoin held steady to post a weekly close at $10,780, meaning the top cryptocurrency has now closed above $10K for nine consecutive weeks. The previous record of 9 consecutive weeks was set in 2017 when BTC/USD rallied to highs of $20,000.

To put that into perspective, BTC/USD has posted a daily close above $10K for 63 straight days, beating the 62-day streak set during the 2017 bull market.

According to data from crypto analytics firm Messari, the world’s largest cryptocurrency has had a daily close above $10,000 since July 27 when bulls rallied to close at $11,043.

Sentiment around crypto for the past week was overwhelmingly bearish as Bitcoin first fell to lows of $9,800 before finding it difficult to break above $10,600. Prices were largely capped under $11,000, which Skew Analytics has pointed out to be due to the low volatility registered over September.

As shown in the chart below, Bitcoin’s realized volatility has dropped considerably over the past three months to an average of 49% and 47% over the last 10 days. 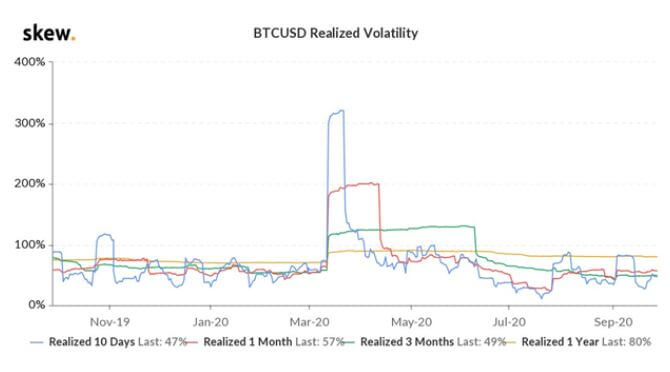 Josh Rager, a respected crypto trader and technical analyst, says that despite the slow action Bitcoin is still in an uptrend although it’s puzzling why people remain largely bearish.

“Weekly close looks good and I don’t know why people continue to be overly bearish. Bitcoin got a short term pullback and -20% is nothing unusual,” he tweeted on Sunday.

Morgan Creek Digital co-founder Antony Pompliano also believes the market is “proving” the bears wrong. He has pointed to the record 63 days of BTC/USD above $10,000 as a signal that the price is set to go higher.

Elsewhere in the market, Gold (XAU/USD), and the Dow Jones will benefit from an upside over the week. However, any downward moves could see them extend a run that has already seen the precious metal fall to a 10-week low of $1860 an ounce while the benchmark stock index fell to an 8-week low.

The post Bitcoin confounds the bears to close above $10K for 9th consecutive week appeared first on Coin Journal.

Million’s price doubles in 24 hours: where to buy TechLead’s MM

YouTuber TechLead’s very own cryptocurrency, Million (MM), is flying on just its second day of existence. Here’s where to get…