Bitcoin and Ethereum have both participated in a price increase that took place over the past 10 days, ever since Bitcoin options expired, and investors once again became optimistic about the price performance. Unfortunately for BTC, the coin has struggled a lot over this past week, constantly trying to reach and breach $60k, and constantly being rejected. On the other hand, Ether had much better luck.

The crypto industry has seen some rather positive events this past week. One example comes from JPMorgan, where the bank adjusted the BTC price target to $130,000. This is a big thing for Bitcoin, especially since it is coming from a bank that has been bashing BTC for ages. The company explained that it expects an even stronger institutional adoption that will eventually push BTC.

Morgan Stanley also showed its support of BTC by adding it to 12 Mutual Funds’ investment strategies. But, there is no doubt that BTC is getting more and more relevant and involved. Employment search websites show a massive amount of job offers involving Bitcoin and blockchain. BTC was even referenced in the most recent episode of ‘The Falcon and the Winter Soldier.’

Ethereum did not really provoke a price increase with anything other than a continued promise that new upgrades are coming and that they will resolve the project’s scalability and gas issues.

Price-wise, BTC kept trying to hit $60k over this past week, and it kept falling, with each attempt being followed by a correction. The biggest corrections came this weekend, according to CEX.IO, causing BTC to crash to $56k at one point. 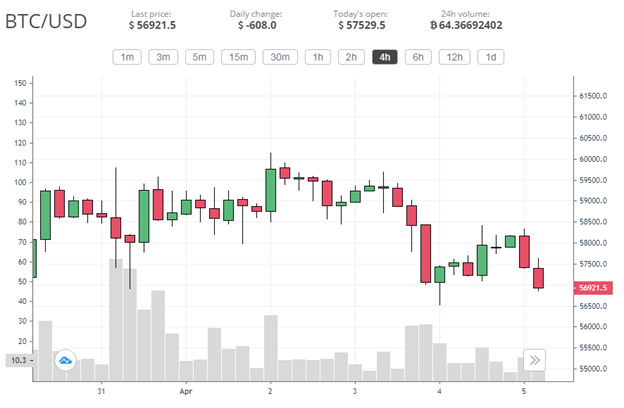 Ethereum did better here, surging throughout the last week until it hit a new ATH at $2136 on CEX.IO.

The post Bitcoin corrects after reaching $60k while Ether goes for a new ATH appeared first on Coin Journal.

BinaryX’s price has gone through the roof, setting a new all-time high over 5x higher than the last Decentralised binary…

Russia to ease restrictions on cryptocurrency

After many years of restrictions, Russia is deregulating cryptocurrency and joining the global crypto industry Russian President Vladimir Putin recently…