BTC/USD has corrected lower after its bounce towards $38,000 failed to hold. The upside momentum is likely to fade even further if prices stay below $35k, with bears seemingly ready to sink prices to lows of $30k.

At the time of writing, Bitcoin is trading around $33,834 and is very close to breaching trendline support formed since 4 January lows of $27,727. If downside momentum takes BTC/USD below intraday lows of $33, 600, bulls would be at risk of ceding full control to the bears.

Buyers are currently keeping BTC above $33,700 and need to bounce above $34,000 and then aim at the $35k threshold to remain in control short term. However, the technical picture appears in favour of more losses before buy orders take prices higher.

The daily RSI is trending with a negative divergence to indicate bear dominance might come into play. The daily chart also has the moving average convergence divergence (MACD) indicator in the bearish zone to suggest bears have the upper hand.

BTC/USD has also dropped below the 21-SMA, with short term interest largely seller-driven. 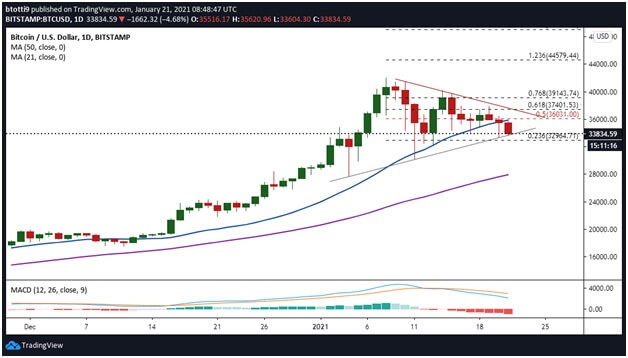 According to Decentrader analyst filbfilb, Bitcoin’s failure to establish support above $35k and retake positions above $38k could leave it “trapped” in an extended consolidation. This will likely keep prices with the $30,000—$38,000 range for a while.

The analyst thinks $30k could be a floor, but further declines beyond could provide demand opportunities. BTC/USD could even revisit support levels in the mid-low $20ks.

“I welcome both a healthy consolidation establishing $30k as a floor & see any dip into the low-mid $20ks as a cyclical dip opportunity“, he noted.

On the upside, bulls need a strong bounce above the 50% Fib level ($36,031) and 61.8% Fibo ($37,401). Keeping prices within this range will strengthen the buffer zone, with increased buying volumes likely to allow for a retest of the stubborn $38k resistance level.

If buyers clear the hurdle and turn it into support, bullish momentum could build towards previous resistance levels near $40k and the $42k ATH.

Bitcoin’s price has recovered above the 200EMA on the 4-hour chart, a key support zone likely to catalyse a fresh…

Starbucks deploys blockchain to track coffee from bean to store