Bitcoin had a historic day on 8 February, skyrocketing over $8,800 in 24 hours after Tesla disclosed an investment of $1.5 billion in BTC.

On top of that, the electric car maker also announced that it would soon accept cryptocurrency payments for its cars. The news saw Bitcoin’s price go parabolic, registering its largest-ever green candle in its history.

While Tesla now joins MicroStrategy as the largest institutional investors with a combined investment of over $4.5 billion, analysts suggest this is only the beginning.

According to BKCM founder Brian Kelly, other companies could soon join the two in adding Bitcoin to their balance sheets. In an interview with Mellissa Lee on CNBC’s Fast Money, he suggested that Tesla could just have opened the floodgates for other publicly-traded companies to join in on the Bitcoin bandwagon.

“This isn’t going to be the only one. This is just really the tip of the spear“, he said.

Demand for Bitcoin has been growing, primarily among big-money investors. This trend has seen analysts forecast continued growth for BTC price even as more companies look to come on board.

According to on-chain analytics platform Santiment, Bitcoin’s upside to current price levels is, therefore “justified,” given the rise in unique addresses. In a tweet posted after BTC/USD reached one of the multiple ATHs, the platform noted:

“Bitcoin has continued to skyrocket today, now reaching an #ATH of $47,500. This climb has been justified, according to the consistent rise we can see in the 200-day moving average for active addresses (unique addresses interacting on $BTC’s network).”

Bulls seem to want more, though, suggesting the rollercoaster could continue. As of writing, BTC/USD has a new record to beat at $48,216. Bulls could further eye the $50,000 mark.

Bitcoin’s move to a new all-time high price of $48,216 suggests another leg up could see bulls reach the now coveted $50k mark.

A look at the charts suggests a bullish outlook to support the move, with technical indicators on the daily and weekly time frames bullish. The RSI and MACD on these time frames feature bullish divergences.

The short term picture is also largely bullish as the price remains above an ascending support line. While it is trending overbought, it’s not overextended yet and bulls are likely to quickly buy any dips in the short term.

But as Santiment data shows, BTC sent to exchanges has hit a 19-day high to signal the likelihood of a sell-off.  That has shown with prices dipping below $48k in the last hour. If selling pressure pushes BTC/USD below $46,000, the previous ATH at $42,000 and the 20-day EMA ($41,948) could act as a robust support zone. 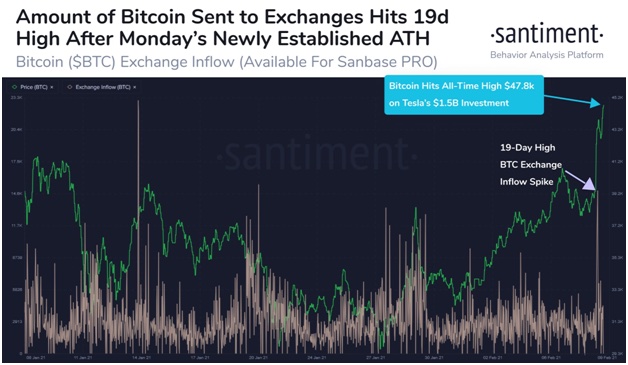 xxxNifty has seen its price grow by almost 60% in the last week. As NFT collectibles continue to develop and…