BTC/USD has crossed the $35,000 level and could hit $40,000 if it achieves a daily close above a critical support level

Bitcoin (BTC) price has shot above $35,000, climbing more than 10% up in the past 24 hours to touch highs of $35,879. If Bitcoin maintains the uptrend that has seen it breach overhead resistance at $34,800, the next target could well be the $40,000 level. Bulls appear locked on the price level as several technical and fundamental indicators support the bullish outlook.

On-chain data shared by analytics platform Santiment shows that whale accumulation of BTC has reached a new all-time high (ATH). According to the firm, whale addresses that hold 1,000+ BTC hit 2,323 on Tuesday.

“Bitcoin’s number of whale addresses with at least 1,000 $BTC has reached an all-time high of 2,323 with Tuesday’s market close 45 minutes ago. There may not be a more notable bullish metric than one pointing to growing holders with $33.7M+ on the line“, Santiment explained. 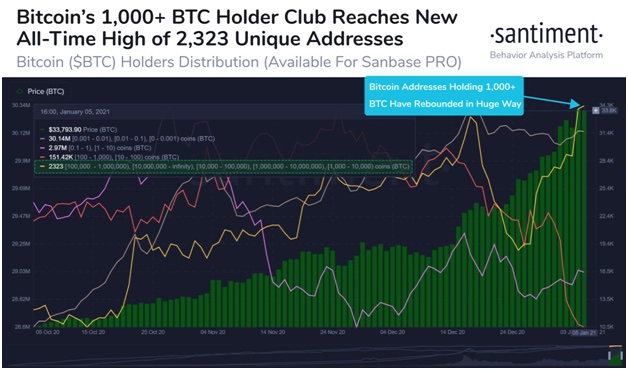 Whale accumulation in an uptrend is a sign of belief in BTC price going up, which is likely to maintain the bellwether cryptocurrency’s impressive trend.

At the time Santiment noted the positive signals from increased whale addresses, Bitcoin was trading around $33,793. But after sailing through the $34,000 and $34,500 resistance lines, BTC/USD quickly rose to a new ATH of $35,879.

Prices have since dropped slightly to $35,000, and although sharp upsides are normally intersected with sharp declines, bulls appear to have the edge.

The 4-hour chart suggests Bitcoin is on an uptrend going into the European and US trading sessions on Wednesday. The BTC/USD pair is above the 50, 100 and 200 simple moving averages to suggest bulls have a strong base.

The RSI is increasing and is yet to cross into overbought territory while the MACD has printed a bullish crossover and is strengthening. 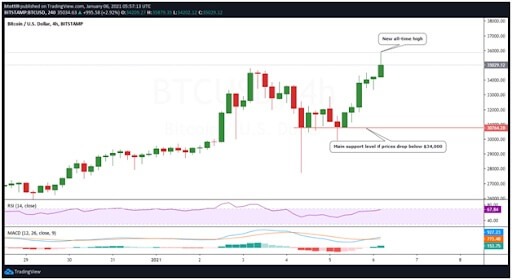 On the contrary, Bitcoin’s bullish outlook will flip negative if bulls fail to close above $34,000. Increased sell-off pressure could then force some more rinsing and bring the $32,000 support zone into play.

LINK/USD touched $7.40 after extreme sell-off pressure saw it tumble from highs of $20 ChainLink’s price action has been one…

XRP, IOTA, and Stellar are all primed for further gains as we head into the weekend As the weekend approaches,…