Green is coming back big: Bitcoin is waking up in amid the Altcoin season and the price has been increasing for the past 24 hours, seemingly putting the market out of its slumber.

A new trend is shaping up, as the major exchanges are announcing their new IEO platforms that trigger a positive response from the market. This includes exchanges such as Huobi, KuCoin, and of course – Binance. The recent Altcoin season caught the market by surprise and traders are looking for new pumps to ride on.

But, how long will the current enthusiasm last? What will happen after that? It’s clear that the enthusiasm comes from pumping the price of selected altcoins, rather than the increasing need for blockchain technology itself. Hence, it’s very important to be as careful as possible and not to succumb to the FOMO (Fear Of Missing Out).

In addition, stable coins continue to gain momentum, and with a little bit of speculation, they can be seen as the solution that replaces the need for banks, should the cryptocurrency industry come to rise.

Nevertheless, the sharp rise in the price of Bitcoin halted the enthusiasm built in trading against Altcoins. Their price has plummeted against Bitcoin in the past 24 hours. This is another reminder of Bitcoin’s great influence on the market and the pattern of familiar behavior where Bitcoin is still the dominant cryptocurrency that determines the market direction. However, the rise of the Altcoins against the dollar is attracting new players to the market, and this can be seen as a positive sign.

To wrap it up, it looks like 2019 is shaping up as a positive year for the market and optimism is continuously rising. Trading volume has increased greatly in recent days and mining fees are rising accordingly. 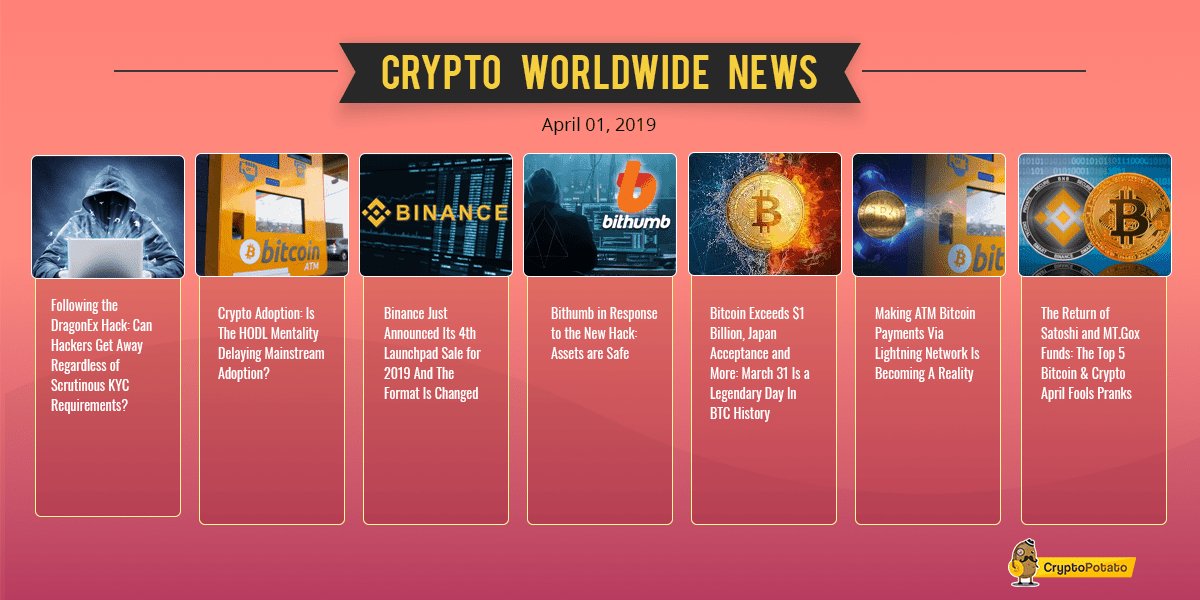 Following the DragonEx Hack: Can Hackers Get Away Regardless of Scrupulous KYC Requirements? In a bid to checkmate crypto hacking,  the KYC scrutiny was initially created by Binance which requires facial recognition, ID, and address verifications.

Crypto Adoption: Is The HODL Mentality Delaying Mainstream Adoption? While HODL is paraded as a solution to crypto’s instabilities, other factors like lack of trust and inadequate knowledge are still keeping the industry from massive adoption.

Binance Just Announced Its 4th Launch Pad Sale for 2019, And The Format Has Changed.  In addition to announcing its fourth IEO, Binance put measures in place to curb the issues stemming from high participation demand in Binance Launchpad by changing the format for token sales.

Bithumb in Response to the New Hack: Assets are Safe.  Bithumb reassured customers of the safety of funds after another major hack, but also made a contradictory report of stolen cryptocurrencies from its platform.

Bitcoin Exceeds $1 Billion, Japan Acceptance and More: March 31 Is a Legendary Day In BTC History. Bitcoin hit a milestone in market capitalization as major organizations in the world like Microsoft began to invest in cryptocurrency upon learning of its viability.

This week we have a chart analysis of Bitcoin, Ethereum, LiteCoin, Bitcoin Cash and XRP – Read more here.

Following a crazy rally, it finally happened: Bitcoin plunged $1800 in a large red candle, driving down the price to…

It seems that the cryptocurrency market is slowly trying to gain momentum. Almost all cryptocurrencies are displaying a slight growth.From…