Around 29 January, both Bitcoin and Ethereum saw a price surge caused by the hype regarding Dogecoin, the Wall Street Bets short squeezes, and similar events that have awakened the crypto industry.

Last week we saw prices continue in this trend, so let’s see what BTC and ETH managed to achieve in the last seven days.

Bitcoin in the first week of February

According to information from CEX.IO, Bitcoin price has moved up by quite a bit in the last week. The price surged on 29 January all the way up to $38,647, only to crash down to $32,850 by the end of the day.

After that, it spent the weekend in relative calm, although it did see another dip on Sunday afternoon, when it dropped to $32,300. 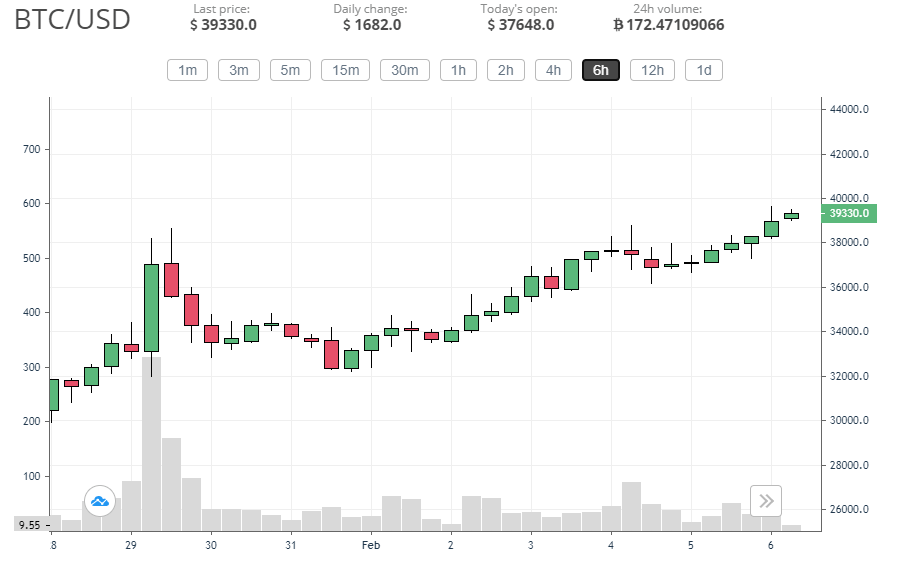 That is not where it ended, however, as the coin has continued to grow, and currently sits at $39,500, once again being only a short burst away from $40k.

In other words, it is possible that BTC could hit a new ATH if trading doesn’t slow down.

In terms of fundamental reasons for growth — there was a new forecast that noted that BTC price could go up to $600k due to the recent Guggenheim investments, although that is only speculation.

In fact, most of the attention this week has not targeted Bitcoin, at all. Instead, many investors were focusing on Dogecoin, and with Bitcoin finally being left alone to follow its natural cycle, the coin’s price started growing again.

One thing to note is that Michael Saylor, Microstrategy CEO, noted that he expects an avalanche of companies that would want to own Bitcoin. With Microstrategy being one of the largest companies to hold cryptocurrencies on behalf of their clients, this can be taken as a confirmation that institutional interest is not wavering. Instead, it seems to be only getting stronger, which is more than encouraging.

Another important development for BTC is the fact that the coin overtook gold in the US, as the 4th most popular investment vehicle. This is also not that surprising, given the fact that up to 76% of Americans view digital coins in a very positive light. Interestingly, the situation is quite the opposite in Japan, where only 22% of people are positive about crypto.

How did Ethereum perform last week?

The rest of the weekend was calm for Ethereum, which also saw a minor dip on Sunday afternoon, but nothing too big or troublesome.

Around 1 February, the coin started seeing a surge that took it back up above $1,400 by the end of the day. The surge continued, and Ethereum managed to breach its former ATH, and keep growing.

The coin’s price surge finally stopped after reaching $1,760, which happened on 5 February. The coin then saw a minor correction, although it quickly recovered and returned to levels above $1,700. 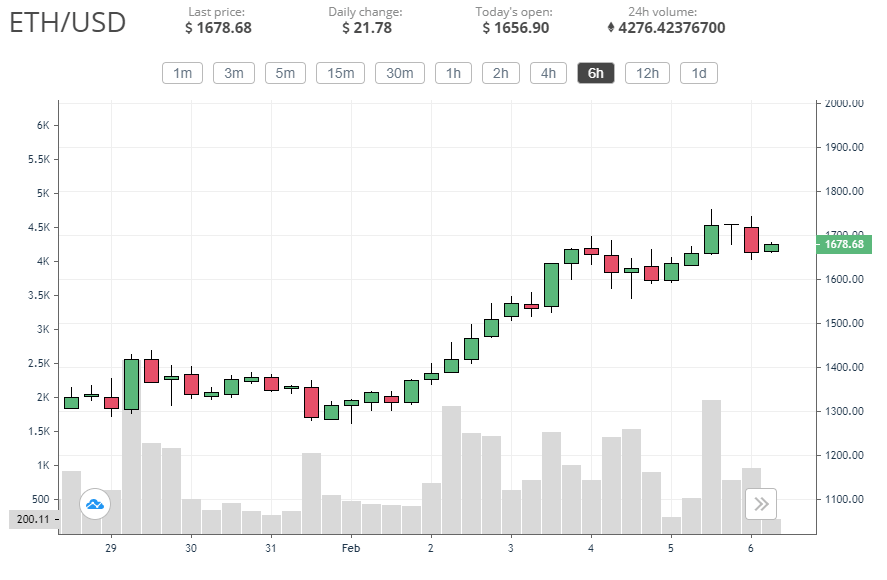 With the Ethereum network being the home of countless ERC-20 and other tokens, there are always new developments and happenings that are indirectly tied to Ethereum.

The attention is mostly on its DeFi sector, which recently saw yet another price surge that took it up to $34,47 billion in terms of TVL (Total Value Locked). Around 30 January, the TVL sat at $27.35 billion, so it can be said that the DeFi sector is advancing quite rapidly.

As for Ethereum’s price, for now, it appears to be struggling with resistance at $1,700. But, should it beat it, the coin might try to reach the $2,000 mark in the coming days this week. Price is definitely advancing more rapidly than anyone has expected, as ETH is seeing levels that were expected to be seen by mid-Q2.

What does the future have in store for Bitcoin and Ethereum?

Bitcoin price seems to be growing again, which is good to see. I stand by my earlier forecasts, where I said that Bitcoin will reach $50,000 per coin by the end of Q1 of this year. The coin is currently around $40k, which puts it on track for this goal.

More than that, it is exhibiting bullish behavior, so $50k by the end of March, and $80k by the end of June are not out of the question. After all, the stock-to-flow model has been extremely accurate when predicting Bitcoin’s price in the past, and there is no reason for that to change.

As for Ethereum, I had optimistic predictions which the coin managed to outperform even now. I expected it to end Q1 with the price of $1,300. However, we are only halfway through the first quarter, and ETH is already trying to breach the $1,700 mark and continue on its way towards $2,000.

My earlier prediction said that the coin will hit $2,200 by the end of Q2, or June 30th. It seems that this might happen even earlier. Of course, there is never certainty with these things — only a decent chance, so I advise investors and traders to remain cautious.

Cardano’s bullish case strengthens as IOHK and UN team up

IOHK and the United Nations have offered a $10,000 bounty for developers to use Cardano’s blockchain. While major altcoins look…