Bitcoin has been in a daily uptrend for basically a month now and the bulls are currently pushing above a crucial resistance area. This tough resistance was formed back on March 20 when the bulls got rejected from $6,900 for the first time. 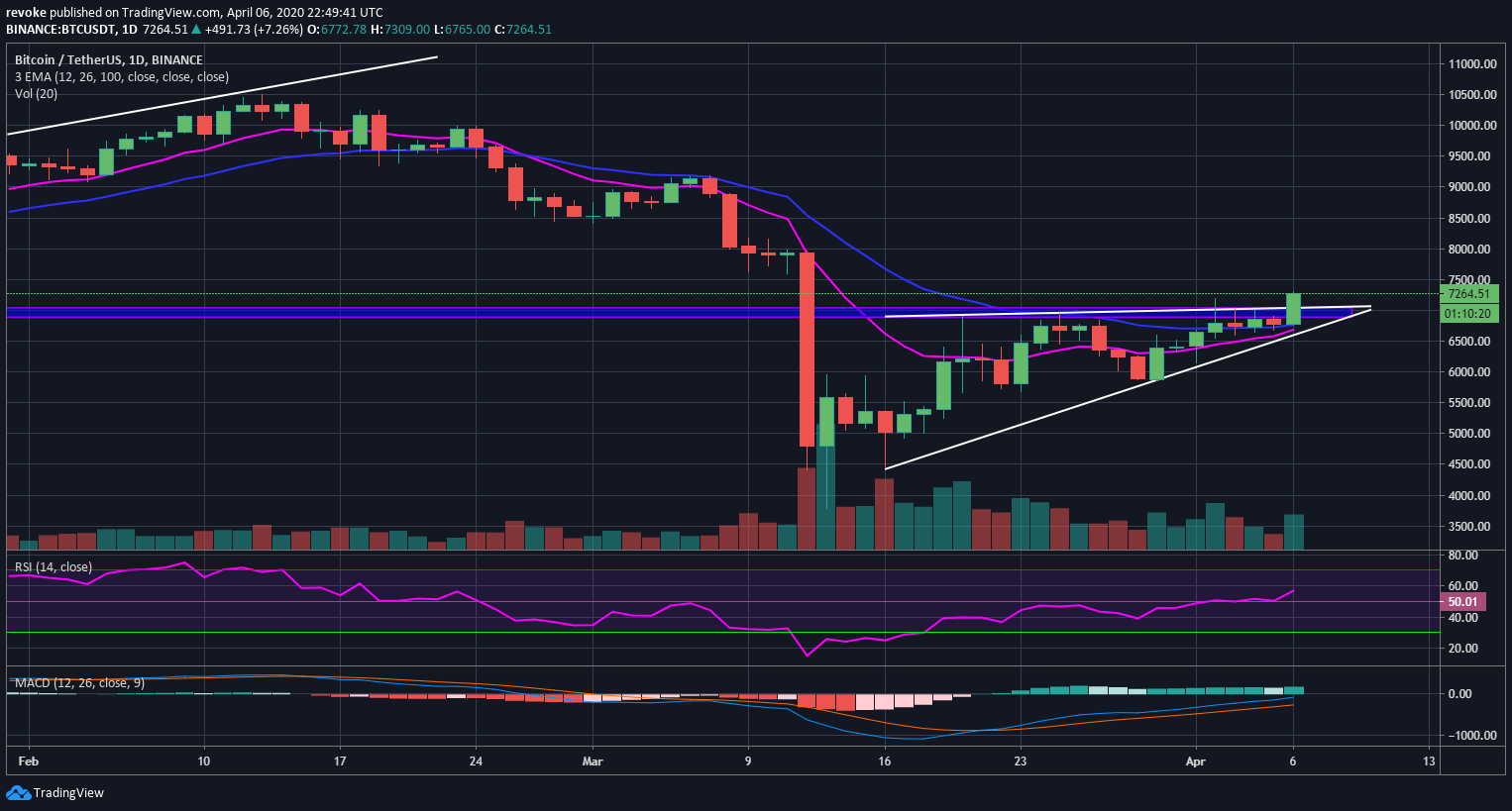 BTC has been rejected several times from the $7,200-7,000 area before but seems to be currently breaking above it. The last high on Binance was set at $7,198 and Bitcoin us trading at $7,262, however, this bull break is weak so far.

The bulls would like to see a lot more volume and price action after breaking above such an important resistance area.

On the daily chart, we can see a clear break above the ascending wedge formed weeks ago and the 12 and 26-period EMAs are on the verge of a bull cross. The trading volume, however, is not so great even though it is higher than the last 3 days.

What Happens If Bitcoin Gets Rejected Again?

A rejection from $7,200-7,300 will not instantly mean Bitcoin will crash. Last time the digital asset got rejected, the bears got no continuation and BTC kept trading sideways for a few days.

If the bears get no continuation again, then BTC is most likely going to stay above $7,000 although it could drop as low as $6,765 (current daily 26-period EMA).

If the bears do get a lot of continuation right after the rejection, Bitcoin will also look at the daily 26-period EMA for support but will likely break below it. The next support point is at $6,684 and then $6,150 which is likely the stronger support as bears would have no problem breaking below the other support levels after a strong rejection.

How High Can Bitcoin Go After A Successful Breakout?

On the daily chart, Bitcoin is facing basically no resistance until $9,200 but the bulls will likely run out of steam at around $8,000, at least for some time. We have to take in count that Bitcoin has been in an uptrend for a month now and buyers’ exhaustion is a real problem, however, at the same time, FOMO could help Bitcoin.

The traditional stock market has continued declining while the crypto market has seen almost a full recovery. This could lead many investors to shift towards crypto and leave the stock market.

How Is The Long Term Looking?

Zooming out to the weekly chart, a significant bounce is taking place, however, it is nowhere close to change the weekly downtrend as the last high is all the way up at $10,500. The bulls are no facing the 12-period EMA resistance at $7,416. 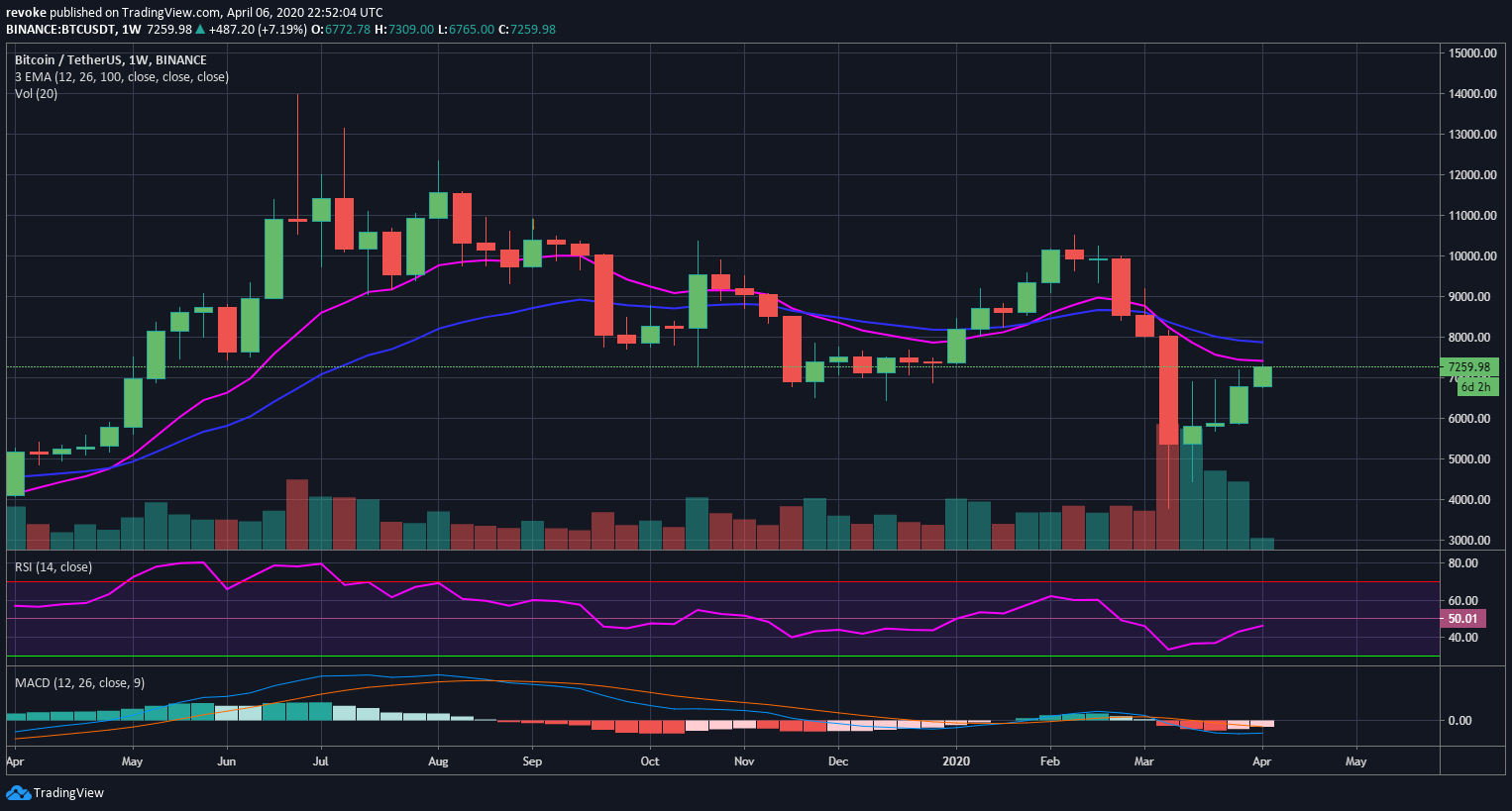 The bulls do have a good amount of space to set a lower high followed by a higher low. Then they can try to change the downtrend but that would take a few good weeks, probably months. An Equilibrium pattern is also certainly possible.

The monthly chart is also in a downtrend but it’s looking a little bit better. Again, the bulls would need to break above $10,500 to change the trend.

Popular cryptocurrency analyst believes that Bitcoin’s price is heading towards $7,200 based on an inverse Head and Shoulders pattern. Interestingly,…

Kriptomat is a completely compliant and standardized platform for purchasing, securely saving, and utilizing cryptocurrencies for any payments. What is Kriptomat?…