BNB, like most major cryptocurrencies, has experienced a significant bull rally in the last few weeks. The initial breakout above $18,22, a crucial resistance level happened on July 12 and took BNB price up to $18,99 before a notable rejection. Binance Coin is experiencing a small increase in trading volume.

What Is The Real Value of BNB?

Essentially, one could say that BNB represents Binance price if it was a publicly-traded company in the stock market.  We know that BNB reacts to positive announcements from Binance, and of course, it should. Initially, BNB was used to raise funds through an ICO, Binance managed to raise $15 million back in 2017 offering BNB tokens for sale.

The amazing success of Binance translated into a huge success for BNB, currently ranked 10th by market capitalization. Binance suffered attacks before, however, thanks to the ‘SAFU’ fund, customers can feel safe as it can be used to pay them back.

Now, Binance Coin is used in various ways to pay for frees and to get trading discounts on Binance. It is also used during Initial Exchange Offerings (IEO), also called Binance Launchpad. Furthermore, BNB is subject to a quarterly burn which will destroy 50% of all the supply, eventually.

Again, BNB value kind of represents Binance price if it was being traded. Binance is currently working on its own card to enable customers to pay with crypto anywhere. According to the official announcement the card works like a regular debit card and can be topped out using your Binance account. The card was already launched in Europe and will be launched in many other regions. Currently, it supports BTC, BNB, SXP, and BUSD.

Starting with the weekly chart, BNB has confirmed a weekly uptrend with increasing bull volume and a bullish cross of the 12-EMA and the 26-EMA. Using price action alone, the next resistance level is found at $27.19 while BNB price is currently at $21.9. 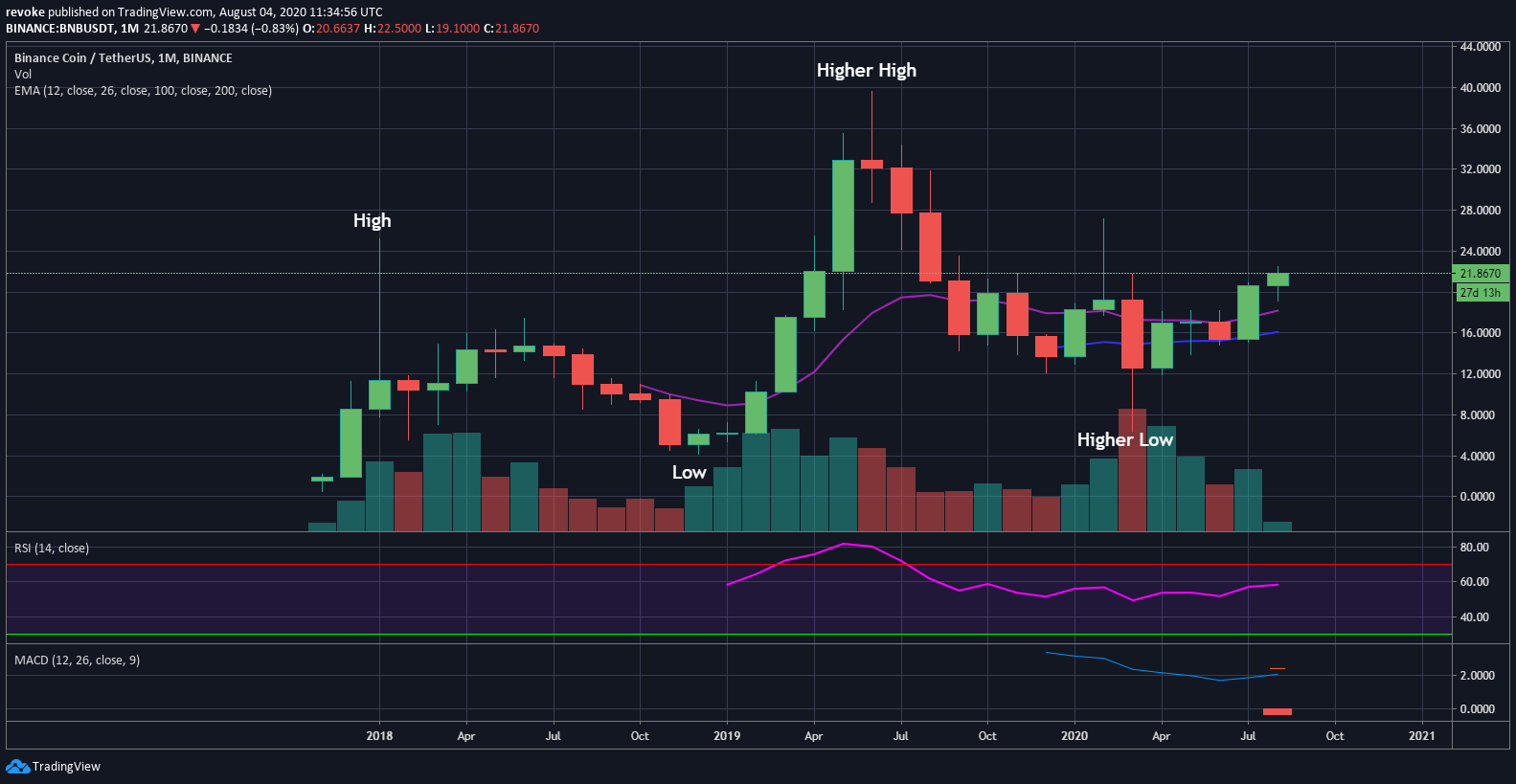 More importantly, the monthly chart has been bullish for basically BNB’s entire existence. In December 2018, bulls set a higher low at $4.12 and only a few months later, they managed to climb up to $39.59, establishing the all-time high.

After the crash in March, buyers were able to defend the higher low and established a new higher low at $6.38, which means the monthly uptrend was never lost. BNB is trading above the 12-EMA and the 26-EMA and it’s again only facing a resistance level at $27.19 and the all-time high.

The total volume of Binance it’s around $9.4 billion right now, which is basically 10% of the entire cryptocurrency market. An overall bull rally should help BNB probably even more than other coins thanks to Binance.

The OMG token is one of the top performers in August! Can the OMG price reach 100$? OMG Price Forecast…

Stablecoins have always been a way to hedge the heavy price fluctuation in the cryptocurrency market. Crypto traders and investors…