Canopy Growth’s stock looks bullish in the pre-market, raising around 7%, after reaching a 10% high on the after-hours trade on Wednesday. Investors turned bullish on the weed giant following the news that it has almost finalized a deal to buy the medical marijuana company Acreage Holdings if pot becomes legal in the United States.

The two companies were discussing the deal for a few weeks. However, sources close to the acquisition offer by Canopy Growth said both parties have agreed on 98 percent of the terms and only need to agree on the final price.

While Canopy Growth can buy Acreage Holdings right now, the problem is its stock is listed on the Toronto Stock Exchange (TSX) and cross-listed in the United States. Since Marijuana is still not legal at the Federal level in the U.S., the acquisition of Acreage Holdings will be illegal under TSX rules. Hence, Canopy Growth’s stock could be delisted in TSX and the U.S. if they outright make the acquisition right now.

The talks between the two companies are actually revolving around Canopy Growth’s “right” to buy Acreage Holdings if Cannabis is made legal by the Federal Government of the United States in the future at an agreed-upon price.

However, once the deal is made, it will give Canopy Growth the right to all the products of Acreage Holdings. Depending on the terms of the acquisition agreement, Canopy Growth can also start helping Acreage Holdings to grow by lending some of its intellectual property and branding rights.

A number of such deals have been done in the past between Canadian and U.S. companies to avoid legal issues. In fact, Canopy Growth has made similar deals with Slang Worldwide Inc via its investment subsidiary Canopy Rivers Inc.

Canopy Growth’s stock reached as high as $47.35 per share for its U.S. listed securities on Wednesday. But as the day progressed, it gradually retraced back to $45.60 per share by 8 p.m. during after-hours trading and settled with a 6.42% gain.

Investors are waiting for the U.S. markets to open in a couple of hours and there is a good possibility that the stock will turn bullish once active trading commences on Thursday. 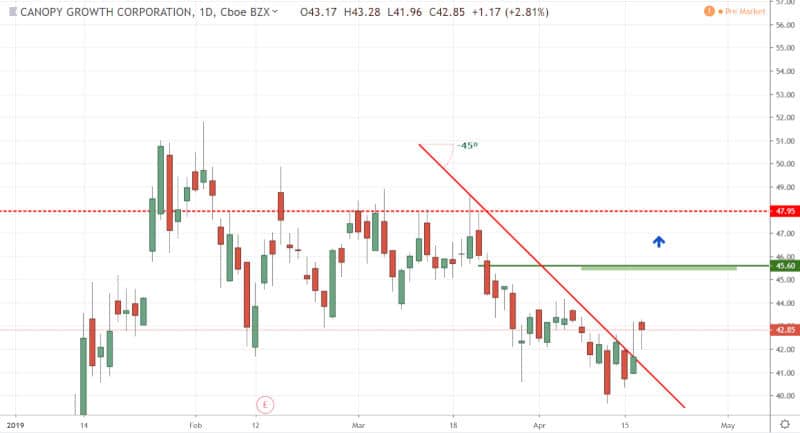 Since Canopy Growth’s share price has already broken above the daily downtrend and made all the way up to $47.35 on Wednesday, the next major resistance to the bullishness should come near $47.95 per share level.

Since February 2019, the resistance zone near $47.95 kept the stock price from gaining further bullish momentum. Hence, if we see a clean break above it on Thursday, it will open up the price target towards $50.00 to $51.00 per share by the end of this week.