British Columbia based Tilray Inc. announced earlier on February 28, 2019, that it has successfully completed the transaction to acquire all of the issued and outstanding securities of FHF Holdings Ltd. known as Manitoba Harvest.

Tilray Inc. agreed to acquire Compass Diversified Holdings’ majority-owned subsidiary Manitoba Harvest earlier on February 19, for an aggregate total enterprise value of up to C$419 million. According to the press release, Manitoba Harvest shareholders, including Compass Diversified Holdings, received C$277.5 million, out of which C$150 million were paid in cash and C$127.5 million were paid in Tilray shares.

Since its foundation in 1998, Manitoba Harvest has positioned itself to be one of the world’s largest hemp food manufacturer, and for the last two decades, it has been a leader in the natural foods industry.

One of the lucrative aspects of acquiring Manitoba Harvest was that it has extensive expertise in working with cannabinoids, including cannabidiol (CBD). Hence, the acquisition will help Tilray, Inc. not only expand its product portfolio into the natural foods category, but also bring Manitoba Harvest’s expertise in with cannabinoids to create a unique value proposition that will add to their competitive advantage in the industry.

Moreover, Manitoba Harvest’s products are sold in over 16,000 stores at major retailers across the U.S. and Canada. The acquisition will give Tilray, Inc. access to an effective distribution that is already in place and it can leverage this network to accelerate its expansion into the U.S. and Canadian CBD markets.

Manitoba Harvest also has an experienced team in place and got two high-quality BRC AA+ certified manufacturing facilities that Tilray, Inc. would be able to leverage to expand its operation in the future.

Commenting on the completion of acquiring Manitoba Harvest, Brendan Kennedy, the President, and CEO of Tilray, Inc., said that he is looking forward to “working collaboratively [with Manitoba Harvest’s team] to develop and distribute a diverse portfolio of branded hemp-derived CBD food and wellness products in the U.S. and Canada. 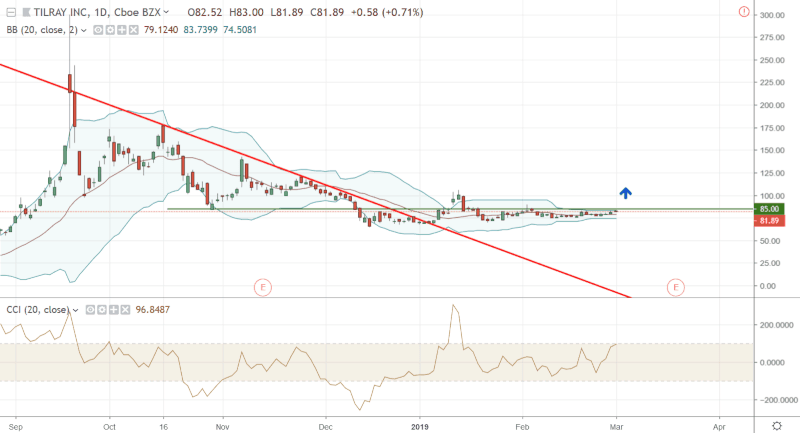 Tilray, Inc.’s stock experienced extreme price swings in the third quarter of 2018. However, over the last several months, the volatility has waned down. In fact, even after it broke above the downtrend line in early January 2019 and crossed above the pivot zone near $85.00 per share, we have not seen any significant bullish momentum that could trigger a lasting uptrend.

With a $7.59 billion in market capitalization, Tilray, Inc. has a median price target of $120.00 per share, offering Cannabis sector investors a 45.8% upside potential in the medium term. However, since mid-January, Tilray, Inc.’s stock traded within a narrow range and tested the resistance near $85.00 per share.

With the acquisition of Manitoba Harvest, Tilray, Inc. has positioned itself to expand rapidly and there is a strong likelihood that it will help the company attract a sustained bullish momentum in the coming weeks.

If we see the stock breaking above the resistance near $85.00 and the Commodity Channel Index moving above the 100.00 level, it will offer investors an opportunity to increase their exposure to the company.

A designated team at Cambridge University has just released The Bitcoin Mining Map. The digital tool shows the geographical location…

Bitcoin Dominance at 18-Month High: The Other Cryptocurrencies Are Bleeding

It’s safe to say that Bitcoin is dominating the cryptocurrency market throughout the past couple of months. At the time…