When the Agriculture Improvement Act of 2018, better known as the 2018 Farm Bill, was signed into law on December 20, 2018, in the U.S., most Cannabis companies only saw the tip of the iceberg as the delta-9 tetrahydrocannabinol (THC) concentration was limited to 0.3% on a dry weight basis in the bill.

One of the major reasons it failed to attract new investments in the industry was that major city regulators like the New York City Department of Health banned restaurants, bars, and coffee shops from selling CBD-infused products. Despite New York Governor Andrew Cuomo pushing for legalizing the recreational use of Marijuana, the regulators were giving mixed a signal to Cannabis companies.

However, the Canadian company Canopy Growth saw the immense potential to develop the market in the U.S.

The Political Connection Canopy Growth Can Count On

Unlike other Cannabis companies, Canopy Growth has a secret admirer in the U.S., the New York-based Fortune 500 company Constellation Brands. Back in November 2018, it invested US$4 billion in Canopy Growth.

Hence, Canopy Growth has the political backing that will ensure its hemp operations up and running despite what the NY Health Department wants restaurants and bars to do. With New York Governor

Andrew Cuomo working to legalize Cannabis use in New York, Canopy Growth is strategically positioned to gain the first mover advantage in potentially one of the largest Cannabis markets in the U.S.

Multidimensional Value Proposition of Hemp Makes It an Attractive Product

Both THC and CBD can be used to relieve pain, but the THC is the component that leads to the feeling of “high” among users. By contrast, CBD offers a nonintoxicating medical solution for users, making it much easier to be regulated than THC based products.

Furthermore, Hemp fibers have multiple applications as building materials, insulation or roofing. It can even be used as alternative fuel or natural plant-based protein for consumption!

This is one of the reasons Tilray acquired hemp producer Manitoba Harvest to give them a foothold in the U.S. hemp market and Canopy Growth is planning to invest $500 million in several U.S. states.

Commenting on the strategy, Canopy Growth CEO Bruce Linton said that it has “three or four states [in the U.S.] that have big populations and progressive leaders who want to have hemp become part of their actual job creation industrial platform.”

The key to Canopy Growth’s strategy is the political backing of progressive leadership and Mr. Linton knows that with the help of Constellation Brands’s lobbying power, it can already count on that political support in the states it is planning to expand in the U.S.

How High Canopy Growth’s Stock Can Go from Here 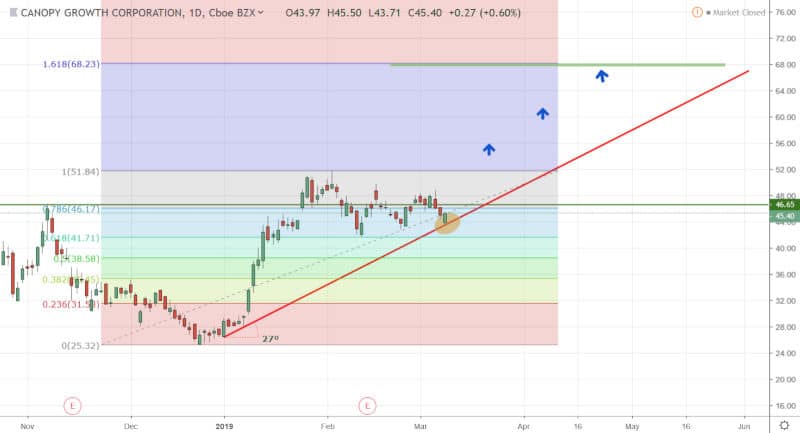 Last week, Canopy Growth’s stock ended at a critical technical point, touching the 27-degree uptrend line that was formed in January 2019. A simple Fibonacci retracement projection suggests that if the uptrend continues, the $68.00 per share level will be a viable long-term price target for the stock.

Increasing exposure to Canopy Growth’s stock at current market price might offer a higher reward to risk ratio, as if the trend line breaks, investors can simply get out by reducing exposure to the company. However, a more viable long-term investing strategy would be waiting for the stock to break above the $52.00 level, the high from February, to aim for the $68.00 per share price target.

The post Canopy Growth’s Secret to Capture the Hemp CBD and Cannabis Market in the U.S. appeared first on CryptoPotato.

Following David Marcus Congress Hearing: Will Libra End Up As an Upgraded PayPal?