Since Cronos Group Inc announced to sell its common shares of the Whistler Medical Marijuana Corporation to Aurora Cannabis Inc for approximately C$175 million, investors have been exceptionally enthusiastic about the value proposition the deal offered for both companies. On March 5, 2019, alone Cronos Group Inc’s stock jumped from $21.02 to $23.70 per share, gaining 10.44% for the day.

Cronos Group Inc is the mother company behind two of the wholly-owned Canadian licensed Cannabis cultivators, Peace Naturals Project Inc and Okanagan Valley based Original BC Ltd. Since the beginning of November 2018, its stock has experienced a monumental bullishness that pushed the price from $6.50 to $25.10 per share, representing a 286.10% increase in market capitalization. As of March 6, 2019, Cronos Group Inc had a market capitalization of $4.24 billion.

Aurora Had an Eye on Whistler Medical Marijuana

Whistler Medical Marijuana Corporation is involved in producing organic medical cannabis or marijuana for patients. In October 2018, it obtained a cultivation license from Health Canada that enabled it to begin growing in Phase 1 of its new 62,000 sq. ft. facility in Pemberton, British Columbia.

As Whistler Medical Marijuana Corporation is the first organic-certified company in the Cannabis market, buying it essentially put Aurora Cannabis Inc in control of the organic Cannabis market.

While the market has rewarded Cronos Group Inc’s stocks mainly because of astonishing quarter-over-quarter sales growth, which stood at 186.10% in the last quarter, the news about selling its stake in Whistler Medical Marijuana Corporation to Aurora Cannabis Inc and getting a sizeable amount of stocks in Aurora will help it become a more diversified company.

Aurora Cannabis Inc itself is a much larger company with $7.82 billion in market capitalization that also has 363.10% quarterly sales growth. Cronos Group Inc already owns two of the major producers of licensed Cannabis in Canada. Therefore, getting C$175 million worth of Aurora Cannabis Inc made it more weatherproof in terms of dealing with the idiosyncratic risks of the Cannabis industry. Investors understand the importance of synergies in creating intrinsic value and the exchange of shares between two of the largest Cannabis companies in a fast-growing industry just might be the deal of the year, so far, and it made the market tick.

Where the Stock Price of Cronos Group is Heading

Cronos Group Inc’s stock has already cleared the minor resistance around $23.00 per share on March 5 and ended the day just below the $24.00 per share. Meanwhile, the Commodity Channel Index reading of Cronos Group Inc has jumped above the 100.00 level, signaling an overbought condition. 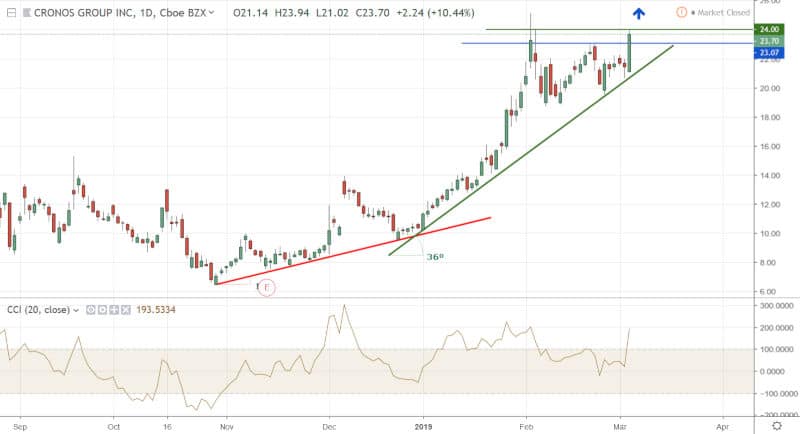 Given the current bullish momentum, if we see the stock breaking above the resistance around $24.0 per share, it will likely continue to go up to test the February 4 high of $25.04 a share.

Moreover, as the latest bullish push came right off the long-term uptrend line, there is a possibility of a sustained move before we will see a significant retracement.

Is Binance – US Clash The Reason Why The Anonymous Beam & Grin Gained Over 80% This Week?

Privacy-oriented cryptocurrencies Beam (BEAM) and Grin (GRIN) have managed to increase in value substantially over the past few days. Most…

3 reasons why Ethereum price should reach USD 1,000 again, and climb to new highs

2020 has been a great year for cryptocurrencies, especially for Ethereum. Advancements in the DeFi infrastructure, big tech using blockchains,…