Earlier on Thursday, the Cronos Group posted revenue of $6.5 million Canadian Dollars in their first quarter 2019, falling short by $0.50 million against a consensus estimate of $7 million. Although the stock reached a high of $16.15 per share at the beginning of the day, bears took control amid the missed revenue and pushed the stock to the support near $13.95 per share.

While the initial reaction of the market was clearly bearish, commenting on the financial performance of Q1 2019, Mike Gorenstein, the CEO of Cronos Group, said that the business performed in line with the expectations of the management.

The Cronos Group may have failed to post revenue in line with what analysts were expecting. But the fact is it’s Q1’19 revenue grew 120% to C$6.5 million compared to C$2.9 million in Q1’2018. In the press release, Cronos Group’s management said the launch of the adult-use market in Canada prompted the triple-digit growth in revenue over the last year.

In Q1 2018, Cronos Group sold only 501 kilograms of cannabis products, which increased 122% to 1,111 kilograms in Q1 2019. Furthermore, the Cronos Group reported continuous growth in cannabis oil shale. In Q1’19, it represented 23% of net product revenue of the company.

Although Cronos Group’s stock turned bearish early in the day, the announcement of closing the deal with Altria should provide ample bullish momentum to the stock. As discussed previously, the deal will give Altria a 45% stake in Cronos Group. Furthermore, Altria will have an option to increase their stake in the future and hold a majority share in the company, up to 55% if they decide that such a decision makes sense.

While Cronos Group continues to lose money from its operations, it has made some significant acquisitions that will bolster its top line growth in the coming quarters. Also, the deal with Altria valued the Cronos Group at $5.3 billion Canadian dollars (around $4 billion U.S. Dollars), giving investors ample reasons to turn bullish despite a lot of Red on their bottom line in Q1 2019. 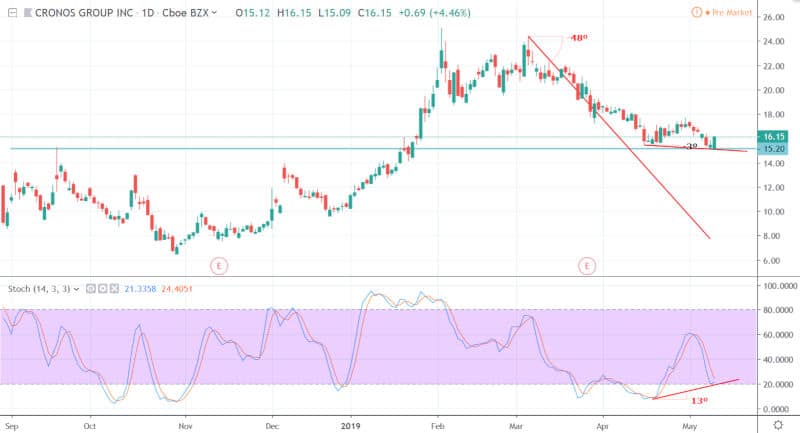 Cronos Group found strong support near the $13.95 per share level on Thursday after the initial sell-off earlier in the day.

Currently, Cronos Group’s market capitalization is around US$2.76 billion. Given the valuation of US$4 billion from Altria, we see significant upside potential for the stock in the coming months.

If we take a look at the Stochastics indicator, it shows a 16-degree uptrend. However, the price action on the daily chart of the Cronos Group shows a minus 15-degree downtrend, which signals a bullish divergence in the market.

Based on this divergence signal, if we see the support near $13.95 per share holds the initial sell-off, it turn out to be strong support level because based on continued sales growth of the Cronos Group as well as the higher valuation from Altria, it clearly supports a long-term bullishness of the stock.

The post Cronos Group (CRON) Tumbles 10% After Missing Sales Estimates: 2019 Is Not (Yet) The Cannabis Year appeared first on CryptoPotato.

How to Register on Bybit

Bybit is a cryptocurrency exchange platform that offers futures trading and it’s one of the biggest exchanges by trading volume.…

In another corporate Bitcoin investment, Stone Ridge asset management group announced on Oct 13 that they have invested $115M in…