Canadian Cannabis company Cronos Group’s stock recorded a daily high of around 9 percent after analysts predicted its revenue has increased by 500 percent over the past year, but ended up 6.76 percent higher based on the closing price on March 25. By the closing bell, the stock settled at $20.53 per share. Cronos Group is set to release its fourth quarter 2018 financial results on Tuesday, March 23. It is worth noting that in Q3 2018, revenue of the company grew by 186 percent and year-over-year Kilograms Sold amount went up by 213 percent.

Why Wall Street is Bullish on Cronos Group

A Bloomberg survey of analysts predicts that Cronos Group’s revenue for the fourth quarter will reach as high as $10.8 million and there is a good chance the company will reach break-even in the fiscal year 2018. Unless we see an escalating cost of revenue due to a proportional increase in operational costs, including Selling, General and Administrative Expenses (SG&A), the consensus forecast of analysts sees a profit of $0.33 per a share for fiscal 2018.

Moreover, the pending legalization of Cannabis in New Jersey also played a vital role in turning Cronos Group’s stock bullish at the beginning of the week. Once passed, the bill will legalize, regulate, and tax the recreational use of marijuana, and help major Cannabis producers to expand their market that will help boost revenues in the coming quarters of 2019.

Since this would be first quarterly financial update after cigarette manufacturer Altria Group made the $1.8 billion investment in Cronos Group and obtained a 45 stake in the company, investors are particularly interested in the performance of the marijuana producer.

“Altria is the ideal partner for Cronos Group, providing the resources and expertise we need to meaningfully accelerate our strategic growth,” said Mike Gorenstein, the CEO of Cronos Group, when Altria Group concluded the investment earlier last year.

Most Cannabis companies that posted their Q4 2018 earnings have reported explosive sales growth and investors are expecting Cronos Group’s revenue to jump in line with overall industry growth in the United States. 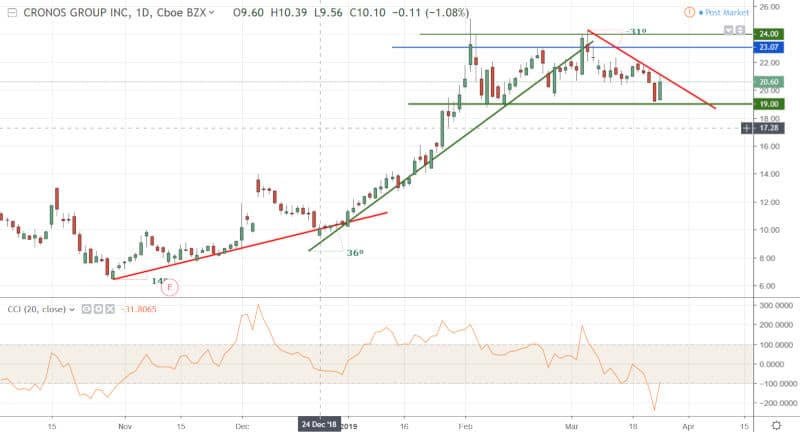 Since being listed on NASDAQ in February 2018, Cannabis Cronos Group’s stock has gone up by more than 180 percent. In fact, since the beginning of 2019, its stock price has gone up by around 101%, including the gains observed on Monday.

Over the past two weeks, Cronos Group’s stock gradually declined but found strong support near the $19.00 per share level. Furthermore, the Commodity Channel Index produced a divergence and signaled that the long-term uptrend will likely to resume soon. However, despite the 9 percent gain on Monday, the stock is still trading below the short-term downtrend line.

While the bulk of the sales growth prediction is being priced in by the market, the actual results on Tuesday will help provide confirmation regarding a range of financial metrics that may further solidify the bullish momentum we saw on Monday.

If we see that the management of the Cronos Group excelled at leveraging the investment from Altria Group to grow the revenue as forecast by analysts, but at the same time, increased operational efficiency to reach breakeven, it will give the market ample reason to zoom past the recent downturn and test the resistance near $27.00 per share over the coming weeks.

$200B SBI Holdings CEO: Bitcoin’s Value Is Zero, Ripple Is The No.1 Cryptocurrency