2018 is over and whoever had expected a bullish year like 2017 turned to be very disappointed. The good news is that, as of now, the sharp November declines are gone, while the market stabilizes above $3600.

2018 has ended recording an annual low at $ 3100, while the low of 2017 was $770. To sum it up, despite the declines and the investors who suffered from the enormous losses, Bitcoin is still considered a profitable investment in a yearly overview.

The hype around Bitcoin in the mainstream media had calmed down, while the media is trying to distinguish between Bitcoin and the blockchain technology.

The media sees blockchain technology for years, unlike Bitcoin. Only history will tell which narrative is correct.

Stable Coins: 2018 was the year of stable coins, as the market discovered the need for liquidity and tokens backed by Fiat, which can expand the crypto trading options and increase liquidity.

Utility vs. Security: The SEC, which usually has bad news for the crypto space, determined that Bitcoin and Ethereum are not securities, as opposed to the vast majority of ICOs.

Social networks against crypto: During the past year, Facebook and Google had disapproved crypto advertisements. Recently, it was published that Facebook will launch its own cryptocurrency. Was this a coincidence?

Bearish Bitcoin: The market is still waiting for Bitcoin to enter the last market cycle, known as capitulation. No one knows of course if we haven’t already seen the lows.

Altcoins are rising against BTC: it appears that some altcoins such as Ethereum and Ripple, are showing a change in sentiment against Bitcoin, which gives traders an optimistic feeling for the beginning of 2019.

We expect for 2019 that regulations will continue to tighten around the crypto ecosystem. Everything we knew about ICOs has already changed, and the crypto fundraising is likely to enter a more controlled system like securities.

Forks are less popular: The hard-forks trend from past winter is now less popular. However, Ethereum is expecting some future hard forks during January.

Bitcoin ETF: So far the SEC had declined all tryouts to approve a Bitcoin-based ETF. However, some analysts hope to see a final approval during the new year.

Global Financial Crisis: The stock markets have begun a deep correction that will likely to affect the crypto markets as well. Opinions on the directions are divided to both sides.

And lastly to this coming year’s forecast, altcoins such as EOS and Telegram are still in their early-stage development, and many see spotlights on them in 2019. 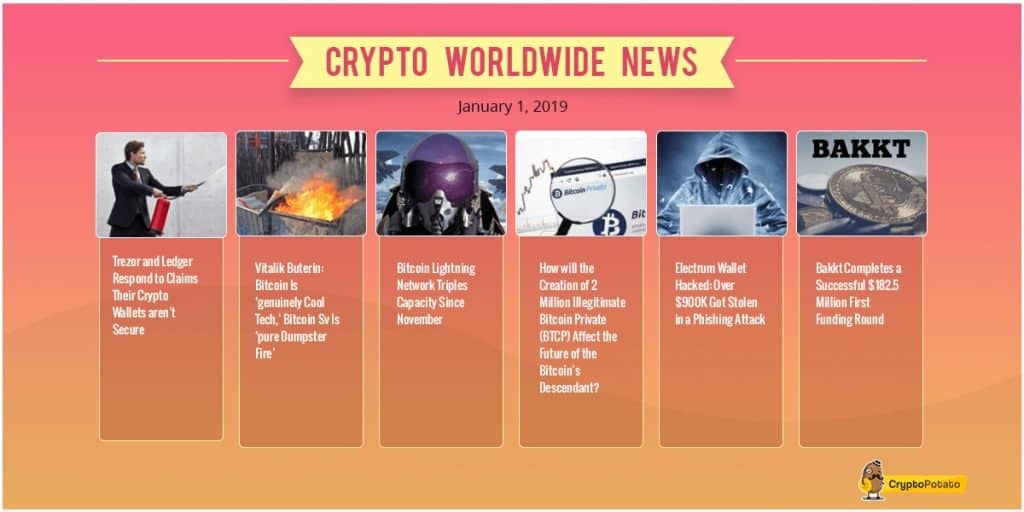 Trezor and Ledger Respond to Claims Their Crypto Wallets aren’t Secure. Two of the most secured hardware crypto wallet providers, Trezor and Ledger, have responded to a recent research paper that claimed the companies’ wallets are prone to vulnerabilities.

Bitcoin Lightning Network Triples Capacity Since November. Lightning Network, a payment solution to the bitcoin scalability problem, has reached a new milestone after exceeding 500 BTC on Dec. 25, 2018, which translates to a 200% growth within the last six weeks.

How will the Creation of 2 Million Illegitimate Bitcoin Private (BTCP) Affect the Future of the Bitcoin’s Descendant? Bitcoin private (BTCP), a hardfork coin from Bitcoin and Zclassic, has been caught up in a controversy for creating 2 million additional coins behind closed doors which were part of the project’s white paper.

Electrum Wallet Hacked: Over $900K Got Stolen in a Phishing Attack. Cryptocurrency theft continues to be a significant challenge, and the latest is an Electrum wallet hack which led to the loss of more than $900k worth of crypto.

Bakkt Completes a Successful $182.5 Million First Funding Round. Bakkt, an ecosystem which aims to bring more institutional investors into the crypto space, has reportedly raised $182.5 Million in its first funding round.

This week we have chart analysis of Bitcoin, Ethereum, Bitcoin Cash and Zcash – Read more here.

Today marks yet another majorly volatile day for Bitcoin but all in the good sense. In the past 24 hours,…

How To Build A Passive Income With DeFi on EOS

The DeFi world is growing from day to day. Ethereum is the leading blockchain when it comes to the amount…