2019 began with a mixed trend. Bitcoin and other cryptos are still around and creating great interest among the public. The large media bodies continue to monitor developments in the field regularly. In addition, the sector’s regulatory framework continues to take shape, and large and institutional entities continue to examine the possibilities for entry into the crypto market, despite the decline in the price and trading volume, and the instability of the market.

The BitTorrent (acquired by TRON), ICO made use of the Binance Launchpad platform to issue a token for use on the platform, and only 600 investors managed to participate in the offering, which is not even 0.6% of BitTorrent’s users. The sale, which reminded us of the FOMO that can be manufactured by an ICO, was completed within fifteen minutes and was made possible through the BNB or TRX only, which affected trading in those cryptocurrencies as well.

Grin and Beam generated a lot of interest among traders, who seem to have lost interest in the rest of the market. These are players who already hold Bitcoin and other cryptocurrencies. If the investments came from new players who are enthusiastic about the technology and the innovation brought by the aforementioned Alts, we would have seen demand for Bitcoin and a greater impact on the market as a whole.

A little more of the action this week was from a post by Vlad Zamfir, a well-known Ethereum developer. He opened a front against what he calls the “Szabo Law”, which asks that no changes be made to the protocol unless changes are necessary for specific technical purposes. The issue generated heated debate on the Web.

The volume of trading closes exchanges, causes problems of liquidity, creates difficulty in raising new capital or relying on fixed income, and causes the collapse of new startups. In addition, tightening the regulatory ropes and claims made against many companies that raised capital from the public froze the market until further notice. 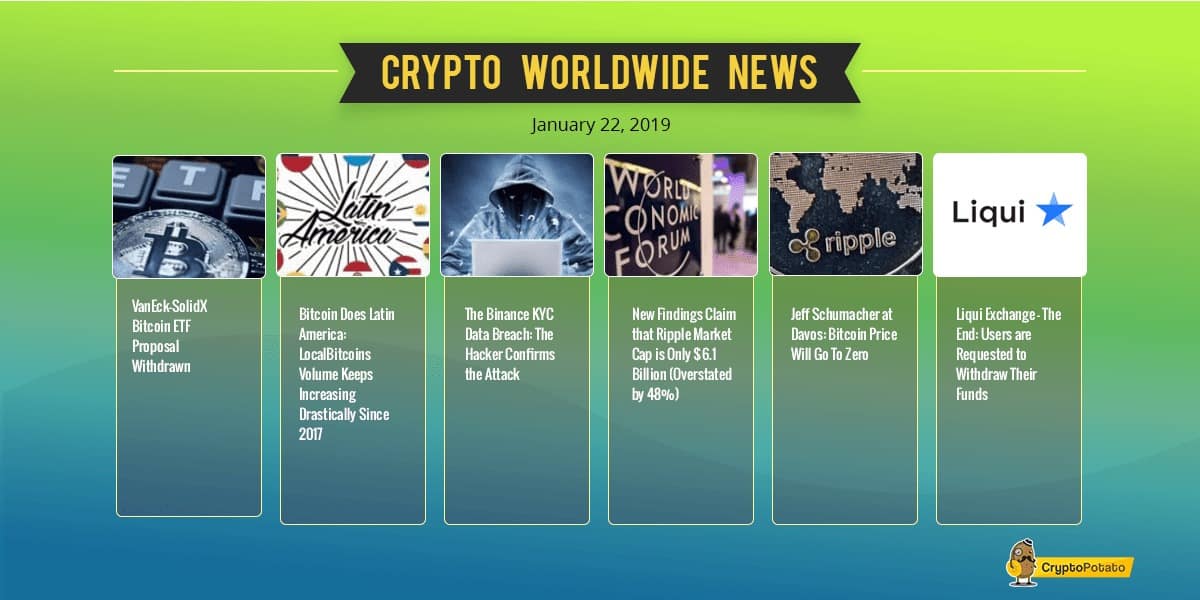 VanEck-SolidX Bitcoin ETF Proposal Withdrawn: What does this Really Mean for Bitcoin? The much-anticipated CBOE Bitcoin ETF application which was awaiting approval has been shockingly withdrawn following the US government shut down.

Bitcoin Does Latin America: LocalBitcoins Volume Has Kept Increasing Drastically Since 2017. Amid an economic crisis in some Latin American countries, reports from Coin Dance show that citizens in affected countries are trading high on Bitcoin via LocalBitcoins.

The Binance KYC Data Breach: The Hacker Confirms the Attack. An anonymous hacker known under the pseudonym “ExploitDOT” has released more proof of a recent data breach at Binance and three other major crypto exchanges.

New Findings Claim that Ripple’s Market Cap is Only $6.1 Billion (Overstated by 48%). Reports from a crypto research company suggest that the XRP market cap, currently about $13 billion, ought to be around $6.9, but Ripple refuted this by stating that its correct market cap should be $31 billion.

Jeff Schumacher at Davos: Bitcoin Price Will Go To Zero. Speaking at the World Economic Forum meetup in Switzerland, Jeff predicted the fall of the world’s largest cryptocurrency.

Liqui Exchange – The End: Users are Requested to Withdraw Their Funds. Following a policy change, the Ukrainian crypto exchange announced that it has come to the end of the road, hence shutting down its platform

This week we have chart analysis of Bitcoin, Ethereum, Ripple and BRD – Read more here.

Blockchain gaming is the new trend in the exciting crypto world. They came into view after the DeFi/NFT mixed trends…

This year was the best year for Dogecoin holders. Not only did this cryptocurrency increase vastly in prices, but apparently…