Is the new 2019 Altcoin season at its peak? It seems that a large number of cryptocurrencies have recently reached resistance areas. In the crypto markets, everything happens quickly, and sharp rises carry rapid, sharp corrections.

This is typical behavior that has been going on for the past several weeks, with the start of the week beginning with a correction from which we see upsurges in an attempt to break through resistance levels.

The effects of the Bitcoin price on most of the market is evident, and when comparing the Bitcoin chart to the major Altcoins’ charts, we can see that a direct correlation is obtained: where the Altcoins gain more than Bitcoin.

Speaking about spikes: Just today, following a major announcement, Everex (EVX) has gained 300% in no more than 24 hours. Even though it is not the first coin to show such gains, seeing it after such a bearish year might be a fore-token.

The market is not quiet, and enthusiasm and hype are slowly building up. If this trend continues, we can expect crypto to reach the mainstream. Besides, there is also an awakening trend in the events surrounding the crypto market, such as companies announcements.

Overall, it can be said that optimism is back and that positive trend continues this week as well, and it seems that the market is still at the bottom in terms of its market cap and its potential to grow. But… only time will tell. 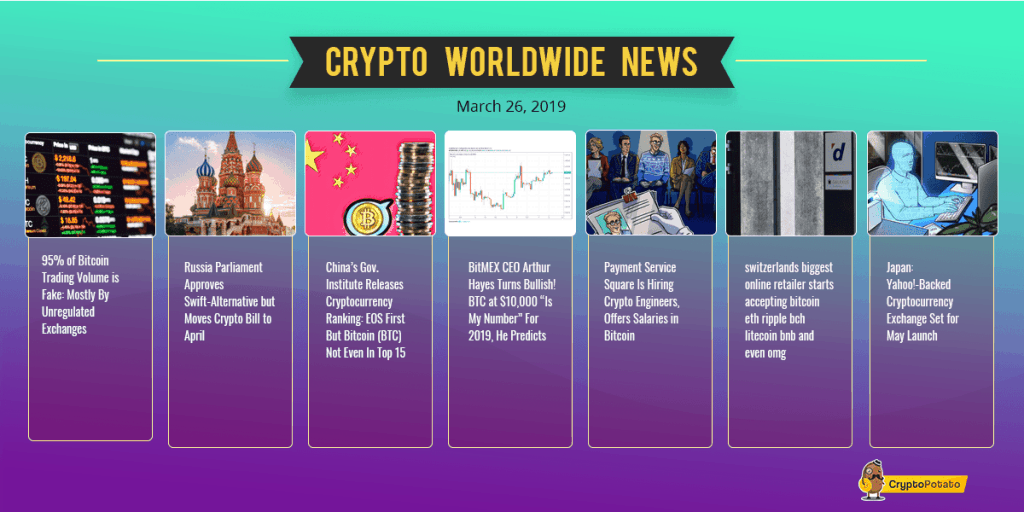 95% of Bitcoin Trading Volume is Fake: Mostly By Unregulated Exchanges. Bitwise, an Asset Management company, based in San Francisco reveals that unregulated crypto exchanges alongside CoinMarketCap, a leading source of Bitcoin data, have been faking trading volumes.

Russian Parliament Approves Swift-Alternative but Moves Crypto Bill to April. Russia has continued to uphold its positive stance towards blockchain by approving a Swift-like payment network to dodge sanctions while rescheduling the proposed crypto bill for April

China’s Gov. Institute Releases Cryptocurrency Ranking: EOS First But Bitcoin (BTC) Not Even In the Top 15. Again, China tenders its cryptocurrency ratings with EOS ranking no. 1 on the list despite predictions that it would take a long time to develop and gain recognition. On the other hand, the revered Bitcoin ranks no.15 on the list.

BitMEX CEO Arthur Hayes Turns Bullish! BTC at $10,000 “Is My Number For 2019”, He Predicts. Arthur Hayes, the CEO of BitMex, who is known to be quite pessimistic about Bitcoin now says that “green shoots will appear towards the end of 2019.”

Payment Service Square Is Hiring Crypto Engineers, Offers Salaries in Bitcoin. The US payment platform says it is looking to employ four crypto engineers and a web designer, who can work remotely on a full-time basis. Square noted that they are willing to pay salaries in Bitcoin.

Switzerland’s biggest online retailer starts accepting Bitcoin ETH, RIPPLE, BCH, LITECOIN, BNB, and even OMG. The largest online retailer in Switzerland in collaboration with Datatrans and Coinify now invites its customers to patronize them with any of the seven different cryptocurrencies available on the platform.

Japan: Yahoo!-Backed Cryptocurrency Exchange Set for May Launch. Taotao, a Japanese cryptocurrency backed by Yahoo plans to start trading in Bitcoin and other selected cryptocurrencies in May 2019.

This week we have chart analysis of Bitcoin, Ethereum, LiteCoin, EOS and XRP – Read more here.

Dogecoin is one of the best-known cryptocurrencies on the market. Not because of its technical peculiarities but the project was…

Binance Coin (BNB) Price Analysis: The Bulls Are Getting Closer To The 2019 High At $20 – a Breakout Or Double Top?

Once Bitcoin’s price had calmed down a bit, the bulls have started to wake up for Binance Coin as BNB…