This week the market calmed down slightly after last week’s volatility. The market continues, as usual, to keep track of the Bitcoin price which is in a slight downtrend, giving the alternative currencies time to correct.

However, not all the Alt’s are affected in the same way, and BNB continues to climb in complete disregard of market patterns, apparently as a result of the Binance Launchpad, which continues to generate headlines and ICOs, with another one already in the barrel.

Ravencoin also rose sharply, and other cryptos showed volatility that we have not seen in the market in the last year. 2019 is beginning with an optimistic tone and it seems that money is beginning to flow back into the market, although one should be very careful because it is a known practice in the capital markets to enter positions at the beginning of the year and that may be what builds the support, but it might not be enough to keep Bitcoin price above $3,000. In terms of trading, one can see a pattern of recovery that is beginning to lighten and an influx of money going towards inferior Alt’s in what seems like the famous Pump & Dump scene that always finds new victims.

Another important figure to note is the trading volume, which ended February as the largest volume since February last year. However, it is too early to say that this is a true gospel and the market is still post-traumatic.

A new information leak revealed that Starbucks had received a significant share of Bakkt’s futures platforms, in exchange for using its software to enable crypto payments at Starbucks.

Bitcoin transcends geopolitical disputes and notes a symbolic peace gesture between Israel and Iran from which was sent the “Lightning Torch” that once again demonstrates unlimited technological ability with no bureaucratic or political barriers. 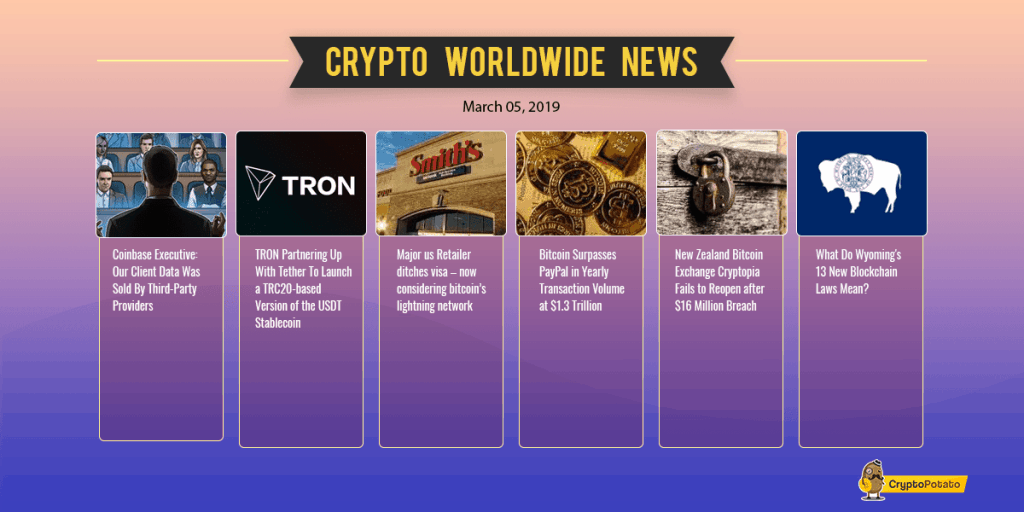 Coinbase Executive: Our Client Data Was Sold By Third-Party Providers. The exchange’s Director of Institutional sales, Christian Sandler, explained that the reason for acquiring Neutrino was because their former tracking providers betrayed their trust by selling customers data.

Tether to Launch New Version of USDT Stablecoin on Tron Blockchain. Controversial stablecoin, Tether has announced a partnership with Justin Sun’s TRON project to integrate the USDT to the Tron Blockchain in Q2 of this year.

Bitcoin Surpasses PayPal in Yearly Transaction Volume at $1.3 Trillion. Diar reports that Bitcoin significantly outstrips Paypal’s yearly transaction because it is easier to use and offers a cheaper means of transferring funds.

New Zealand Bitcoin Exchange Cryptopia to Reopen after $16 Million Breach. After losing some of its funds to hackers, the exchange says it is already re-strategizing measures for securing users’ wallet individually on their new server and could reopen in the coming days.

What Do Wyoming’s 13 New Blockchain Laws Mean? Wyoming is now the only U.S state with comprehensive and new blockchain laws targeted at institutional investors. Find out what else the new regulations will bring.

This week we have chart analysis of Bitcoin, Ethereum, Ripple, Stellar and Dogecoin– Read more here.

Satoshi Nakamoto Won’t Use His Bitcoin Ever, Patoshi Researcher Says

Legendary researcher and prominent figure in Bitcoin’s community, Sergio Demian Lerner, believes that Satoshi Nakamoto won’t ever use his bitcoins…

Ripple (XRP) has seen a small price increase of around 1.12% over the past 24 hours, allowing the price to…