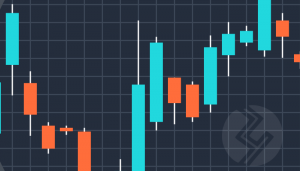 Over the last 24 hours, most cryptocurrencies have been on a Bull Run that has seen cryptos’ prices go up. For Tron (TRX), Ripple (XRP) and Stellar (XLM), there was an average increment of 7% in their value. This was also punctuated by improved investor confidence across the board as the 24-hour volume of each of the three grew. In addition, previous Resistance zones were tested as prices kept pushing upwards. 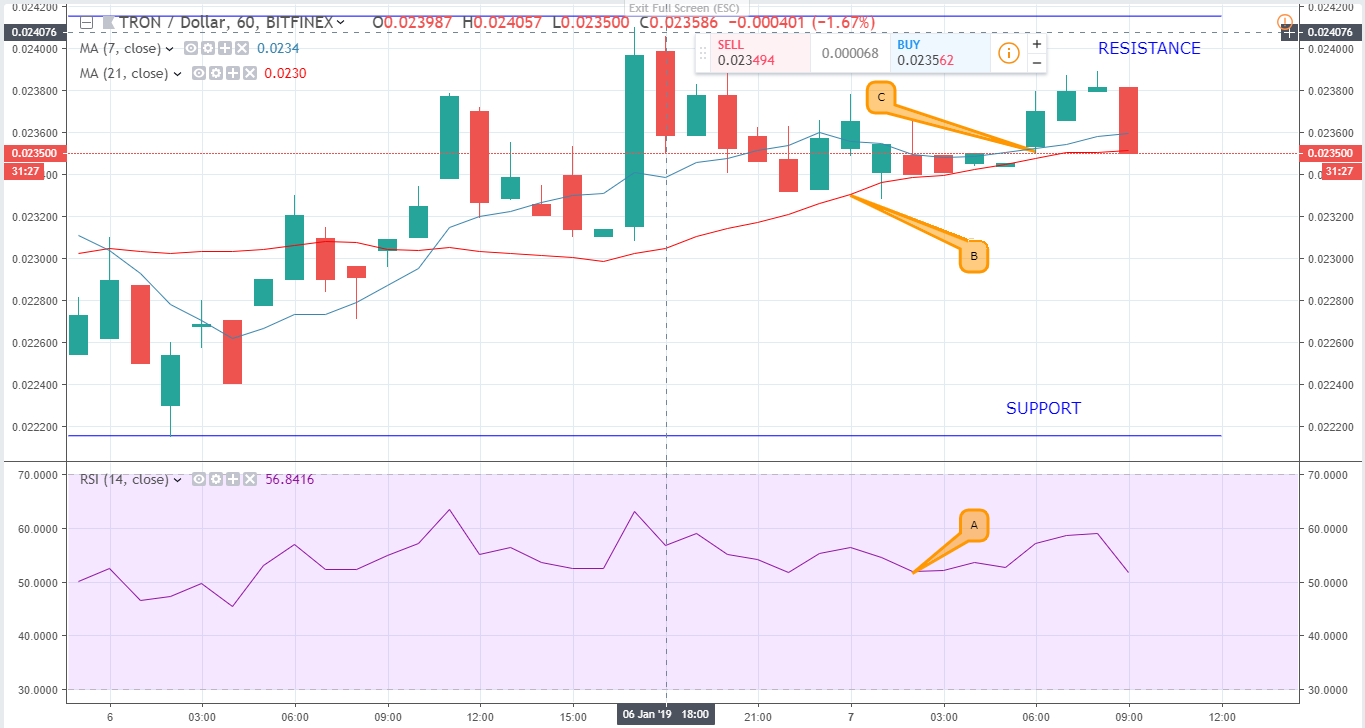 Over the last 24 hours, Tron has seen a Bull Run that pushed its price upwards from $0.0226 to $0.0238. This represents a 5% gain, with the upwards trajectory expected to subside seeing that the 7-day moving average (C) has been dominantly above the 21 days EMA (marked B).

The 21-day Moving average is currently the price determinant, resting at $0.02374. At the moment, Tron has a market capitalization of $1.5 Billion and sold over $137 Million in market activity over the last 24 hours.

Both moving averages are from a reverse contracting triangular pattern which signals a Bullish trend. Consequently, the Relative Strength Index (RSI), marked A, is oscillating at between 50 and 60 which goes to show positive investor sentiments in this Altcoin. 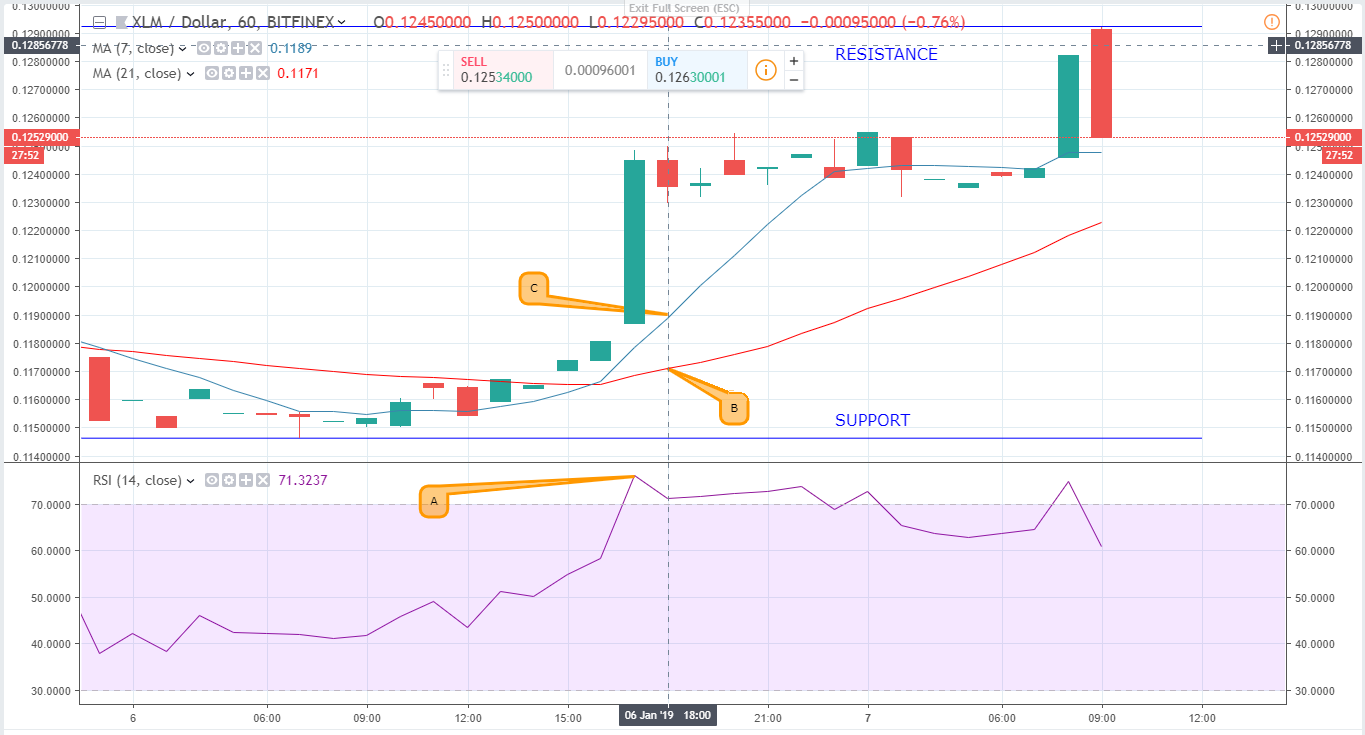 Stellar has a total market capitalization of $2.3 Billion and sold $93 Million in market activity over the last 24 hours. This improved performance saw its Relative Strength Index move into the ‘undersold’ area severally as seen in point A. This goes to show the improved investor confidence in Stellar.

XLM also formed an expanding triangular pattern with its 7 days (C) and 21 days (B) moving averages. This signifies the strong Bullish momentum that has hit the markets. 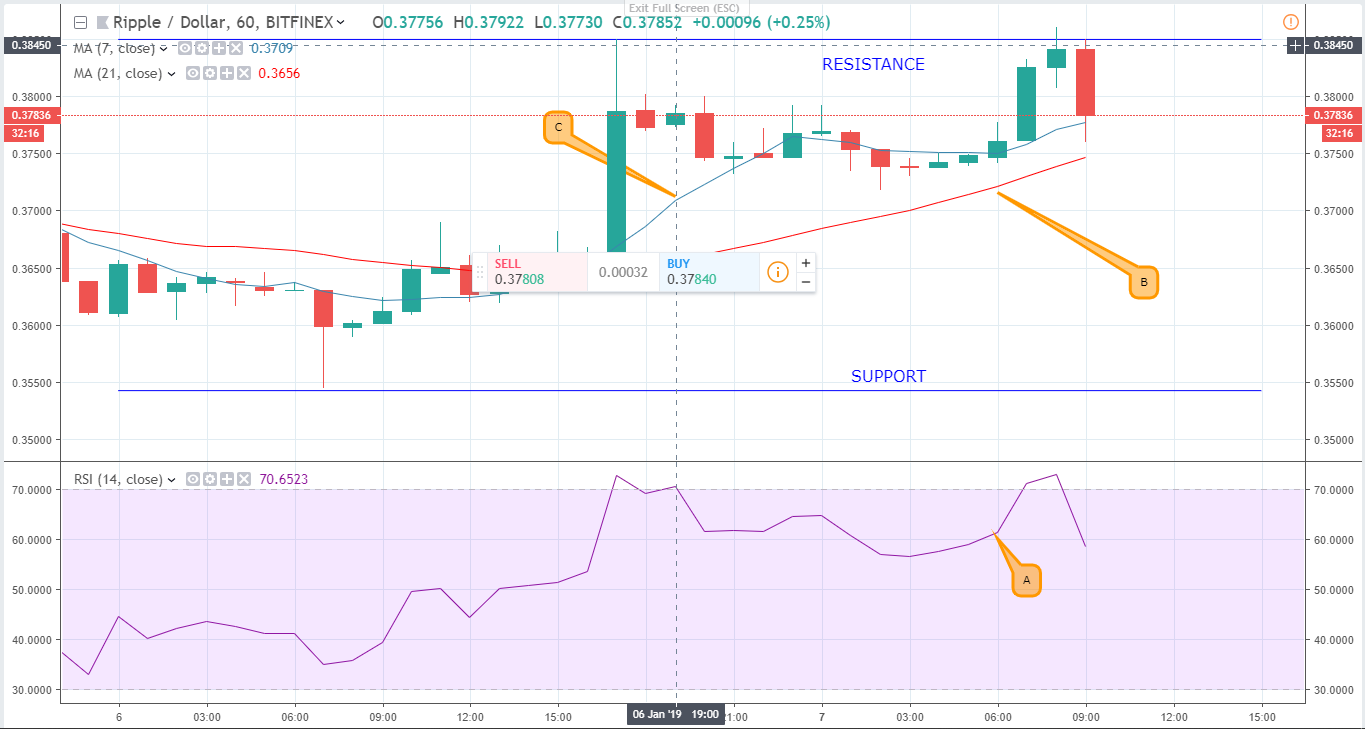 Despite Ripple losing its position as the second top crypto by market cap to Ethereum mover the last 24 hours, its Bullish momentum continued. It gained by 6.6% in value despite its market capitalization dropping from $16 Billion to $15.4 Billion over the last 24 hours. In terms of trading volume, Ripple sold $547 Million.

Marked C is the 7 day EMA which was dominantly above the 21 days EMA (B), showing the strong Bullish momentum. Additionally, investor sentiments are at an all-time high as seen in the RSI (marked A). The RSI crossed over into the ‘undersold’ area severally as a result of the Bullish momentum.

In fundamental news, Ripple CEO’s words are coming true as banks are now beginning to adopt xRapid and XRP for universal transfers.

Monday, January 21st, 2019 – The players have spoken and once again it’s BitStarz Casino that has walked away with…