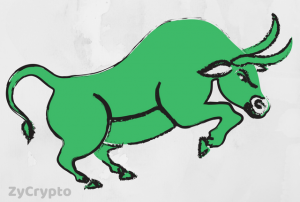 A few days ago, a well-known Chinese billionaire, Zhao Dong, posted on a WeChat group saying that Bitcoin was about to break out in a massive bull run and that the time to buy in is now.

On the same chat, another influential crypto investor has appeared to drop a rather mind-boggling comment. Commenting on Zhao’s post, Zhu Fa dropped a bombshell when he opined that the next crypto bull run could see Bitcoin rise up to hit between $74,000 and $740,000 (500,000 yuan – 5,000,000 yuan).

Zhu is the co-founder and main operator of Poolin, a Chinese crypto mining pool. With roughly 11% share of the total global hashrate, Poolin is currently the 4th largest crypto mining pool in the world.  WeChat forums were abuzz when Bitcoin was hitting its highs, but the enthusiasm that since toned down to moderate discussions.

The Highs Of Bitcoin (BTC)

In December 2017, Bitcoin hit its all-time-high (ATH), reaching a baffling $20,000 price per coin. However, the gain wasn’t to last long as the bear market set in not long after the opening of the next year (January 2018).

Since then, the bears have largely persisted. In fact, compared to the values of December 2017, Bitcoin seems to have shed off a whole 80% of its ATH value. Now Zhu says that the current market situation “feels more like a bear market,” but all is not lost.

Despite this persistent bear attack, Bitcoin still has some strong believers, among them Tim Draper, Tom Lee, and Mike Novogratz. These guys believe that the crypto is yet to reach its full potential and that a massive bull run is just around the corner.

Market prices aside, Bitcoin has been gaining quite some traction of late in terms of adoption and general acceptance. Just a few years ago, only a small fraction of the world population and those in the financial world really knew about Bitcoin and cryptocurrencies. Now, things have changed for the better. In fact, Bitcoin seems to be gaining favor among various institutions and business enterprises that have since begun to accept it as a valid means of payment.

The post Crypto Miner: The Next Bull Run Could Take Bitcoin Up To $700k appeared first on ZyCrypto.

After Strong Resistance for 3 days Ethereum (ETH) Breaks Below $150