Dash has seen its price surge by more than 18% in the past 24 hours. The price is posting to the upside on the back of increased positivity among Dash users eyeing up a slice of the DeFi pie via yield farming in addition to rewards from staking.

DASH/USD price soared from lows of $64 to hit a 30-day high of $77, with the upside spurred by increased buying volume after Dash announced it was partnering StakeHound to make DASH accessible to DeFi users.

The cryptocurrency is trading with a bullish bias as shown by the MACD on the 4-hour chart below. A look at the chart also shows that the 20 VWMA is moving away from the 20 SMA, suggesting the price jump was accompanied by increased upside volume.

After breaking above the 20-day, 50-day and 100-day moving averages, bulls have the energy to test resistances around $80. The MACD has strengthened and the MAs are providing healthy support around $70. 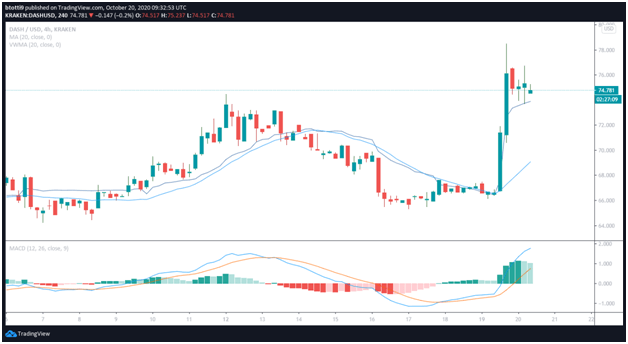 On the daily chart, bulls face slight resistance at the SMA200 and SMA100 lines, which are just under the 24-hour highs. Notably, the price has not experienced the aggressive rejection that characterised the last time we saw upside action.

On September 3, the price of Dash crashed 20% to fall from highs of $84, to touch $65. Bears showed the same aggressiveness near $73, with the subsequent action seeing bulls struggle to break above $70.

The hourly and 4-hour charts feature positive candles, although the momentum is squeezed by a decrease in buy volume. Bulls need to flip this to avoid giving sellers the initiative.

In this case, DASH/USD needs to close with a daily candle above the 100-day and 200-day simple moving averages. If bulls achieve this on higher buy volumes, the cryptocurrency will remain bullish.

A reversal in the short term will see bears aim at taking prices to the next major support level around $69.

The post DASH bullish after 15% spike on back of masternode news appeared first on Coin Journal.

If bulls maintain their upside advantage, ADA’s price could spike towards its ATH around $2.45 Cardano is once again outpacing…

An extension of the upside momentum could see MATIC/USD break towards the $1.00-$1.20 range. The price of Polygon (MATIC) rose…