Despite hitting the second – highest monthly close in its history in October, Bitcoin (BTC) has corrected heavily and currently trades around $13,300 — 1.85% down in the past 24 hours and about 5% since the weekend’s rally to highs of $14,100.

Yet, the correction in Bitcoin’s price is markedly incomparable to the bleeding seen in the decentralised finance (DeFi) space today. Data also shows that the total trading volume recorded on leading decentralised exchange (DEX) platforms has declined.

The bloodbath in the decentralised finance market continues the downward trend that the rollercoaster, that is the DeFi frenzy has registered for close to two months now.

After most tokens coasted to ridiculously high prices in July and August, September saw many declines in prices and by October, most had lost over 50% of the value at which they had traded at the peak.

Analysts point to the rotation of capital into a rallying BTC as one of the reasons for the rot witnessed in the DeFi space. On Tuesday, November 3, Messari summed up the dump by simply tweeting “DeFi blood has been shed”. The analytics data provider shared the following overview indicating most of the tokens are down more than 10%. 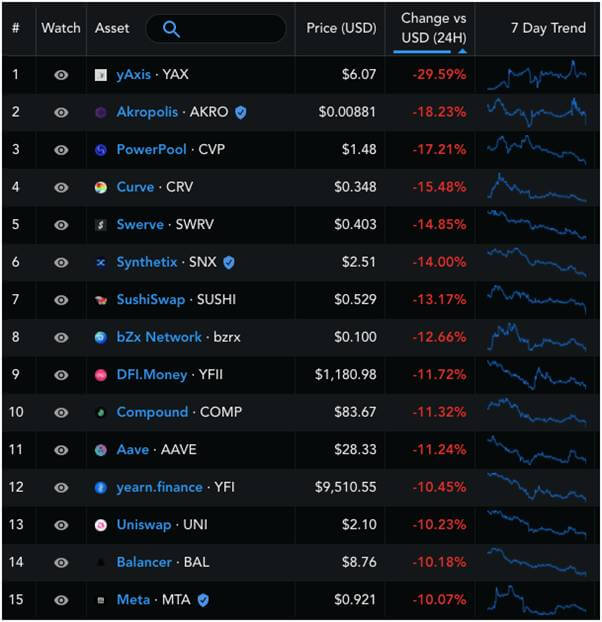 As prices tank, trading volume on decentralised exchanges has also fallen. According to data from Dune Analytics, the DEX volume dropped 26% in October, from around $26.27 billion the month before to about $18.17 billion. In the past 7 days, the metric dropped by 60% while it’s down 10% in the past 24 hours.

The broader altcoin market has also seen increased sell – side pressure in the past 48 hours. Ethereum (ETH) has dropped 6% to slip below $375 and could dump even lower if the bears take control.

Ripple (XRP) bulls, on the other hand, are struggling to prevent a dip below $0.23. Among the Bitcoin forks, fifth – ranked Bitcoin Cash has slumped over 9% in the past 24 hours to change hands at around $240, while Bitcoin SV is more than 8% down at the time of writing.

Rise of CBDCs could boost demand for privacy coins in 2021