The price of Elrond token has risen sharply over the past 24 hours, continuing an upside that has seen bulls strengthen above a multi-month descending resistance line. The uptrend to $25 also means the break from a round bottom pattern could see EGLD/USD touch a new all-time high (ATH) in the $28—$30 region. 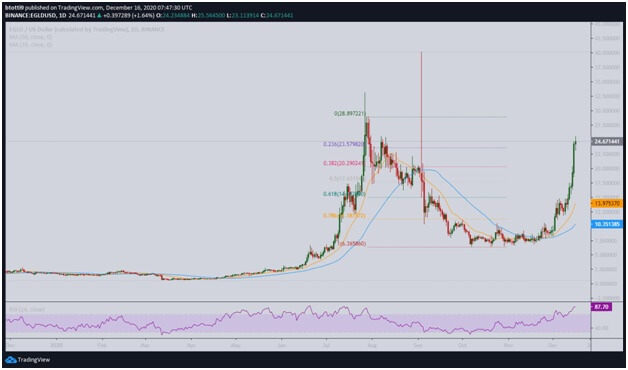 Elrond price touched a low of $6.49 on 29 October, after three months of decline. However, since the breakout to the 50-SMA and 20-SMA levels, EGLD has traded higher to complete a round bottom pattern.

The current upside follows an uptick in overall sentiment in crypto, plus Elrond’s expected listing on eTorox.

As can be seen in the daily chart above, the price action also includes breaking above a long-term descending resistance line that had capped prices since July.

Notably, the $17 price level is critical to bulls. The chart shows EGLD/USD has in the past three months retested the level for support. Staying above it is therefore crucial to bulls.

According to the crypto trader and technical analyst Michael van de Poppe, breaking higher and turning the level into support would pave the way for bulls to reach $28—$30.

“Massive strength on this one, still. Breaking through that resistance zone at $17 is a bullish signal. If that level flips for support, continuation is likely towards $28—$30, as described in the chart.”

The daily RSI and the MACD indicator suggest there is room to go higher. If bulls retain the upper hand, increased upward pressure could help push EGLD to a new ATH around $35.

EIFI FINANCE coin rises a further 120%: here are the best places to buy it

EIFI FINANCE (EIFI) surged by 120% today, consolidating an extremely successful period of growth for the cryptocurrency project. If you…

GPU manufacturer Nvidia has made its GeForce RTX cards unappealing to cryptocurrency miners. Graphics card maker, Nvidia, has extended its…