Just 24 hours ago, Bitfinex announced the listing of ERD and support for staking as well.

$ERD will be listed on @Bitfinex for trading & staking 🔥

ERD didn’t react immediately to the news, something to be expected once an asset is so overextended, however, today ERD is up 8% again so it seems that it did finally react to the news.

Astoningshly, the short-term of ERD is still bullish despite being extremely overextended. The daily chart has clearly formed a bull flag with increasing volume on the way up and decreasing when the flag was set. With the slight boost from Bitfinex listing, ERD looks to be ready for another leg up above $0.0295 and $0.03.

Elrond is currently rank 34th by market capitalization with a $363 million mcap. It is fairly close to BAT and Dogecoin but would still need almost $100 million more to get to the top 30.

One of the best indicators of ERD’s success is the significant increase in trading volume over the past two months. In May, ERD was barely pulling $5 million in daily volume, now, it’s seeing averages of $50 million with a peak of $195 million on July 27. 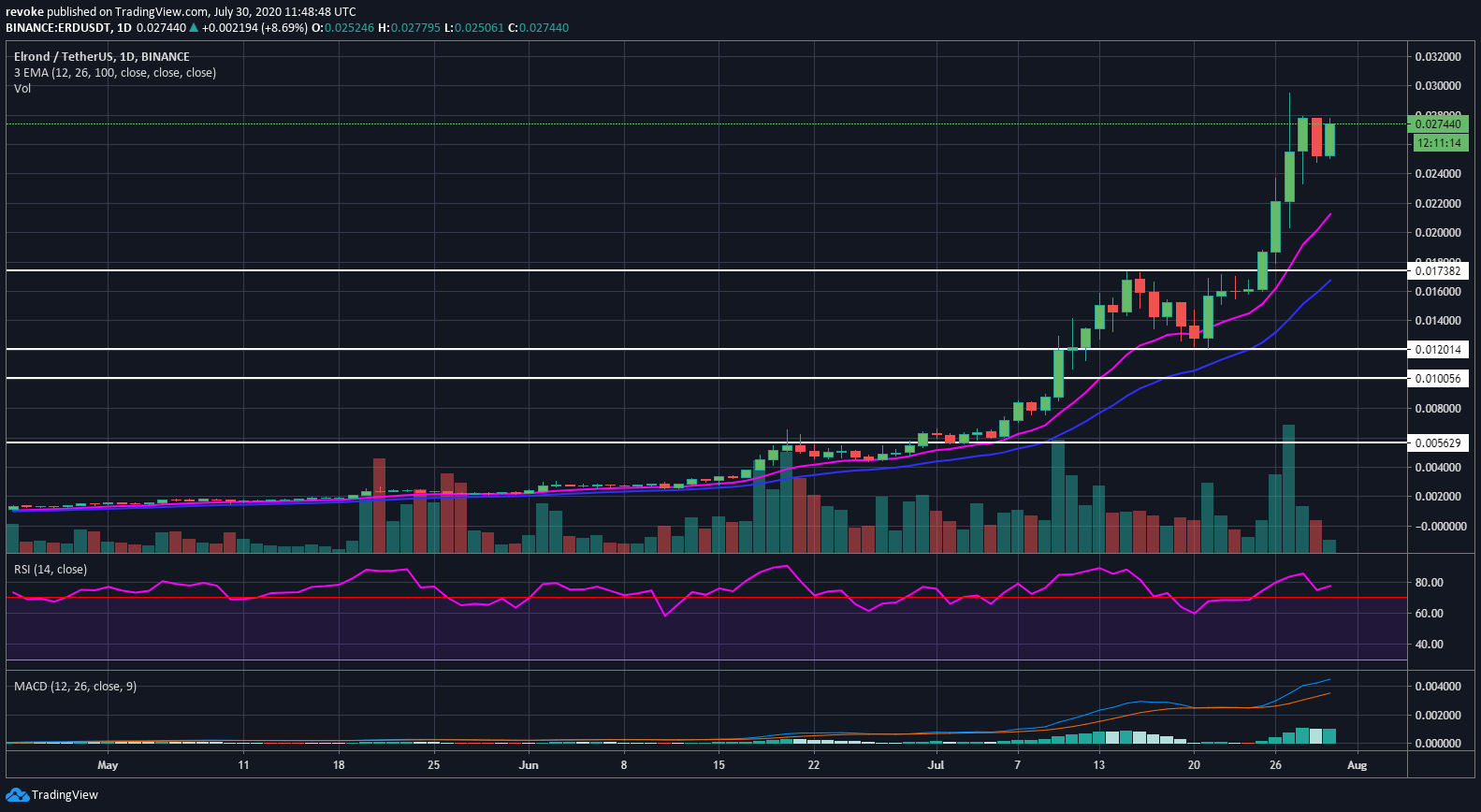 The daily chart is showing no signs of weakness besides an overextended RSI, which clearly means nothing. The uptrend is so strong that ERD could lose $0.02 and still be in the uptrend. The last low is located all the way down at $0.015.

The biggest red flag for ERD would be the loss of the daily 12-EMA followed by the loss of the 26-EMA. These two losses should be accompanied by a lot of trading volume to be relevant.

It is obvious that ERD’s price is overextended here and the RSI is hovering 97 points, however, it’s hard to predict when the digital asset will face a pullback.

Fundamentals seem to be far stronger than Technical Analysis and they continue pushing ERD to higher highs. The main feature of Elrond is that it brings increase scalability and speed. The team of ERD created a new blockchain architecture. It even seems that the new Ethereum 2.0 will be using similar features as ERD.

Elrond has already proven many of its initial claims and that’s why it’s still blowing up in value.  Many people consider Elrond to be a top 10 coin, perhaps even a top 3 in the future as it is an overall blockchain platform that provides speed and scalability.

Elrond Mainnet is only 1 hour away from getting deployed, if it’s successful, ERD could see a new all-time high again.

Upland Is Celebrating 1 Million NFT Properties Minted in the Metaverse

Upland has just hit a major milestone in their platform, and for the NFT landscape as a whole. Being one…

This Billionaire with a Net Worth of $13.2 Billion Reveals 10% of His Liquid Assets are in Bitcoin!

Mexican billionaire Ricardo Salinas Pliego who has a net worth of almost $13.2B disclosed on Twitter that 10% of his…