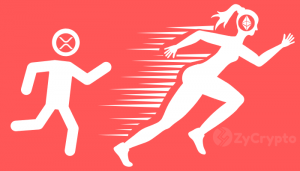 Ethereum (ETH) has jumped back to the second spot with the second highest market cap after Bitcoin (BTC). The cryptocurrency is now ahead of Ripple (XRP) with over $2 million at a price of $122. Ethereum and Ripple’s XRP have been competing for the second spot since last year.

In 2018, XRP took the second position from ETH for the first time and since then there have been several times when the two have claimed and lost the position to the other. The last replacement was in January 2019 during the short bull run that favored XRP significantly.

XRP has been quite bullish from the beginning of the year, an achievement which many in the crypto community attributed to a pump and dump and not an organic price hike. There have also been allegations concerning the asset’s market cap which some people believe is being inflated by the Ripple team.

ETH also saw a significant price surge at the time, going as high as $120 before the decline that is followed by this current recovery. The surge was obviously a result of the Constantinople upgrade which was to take place in January but was postponed till February end. The coming upgrade will hopefully still boost Ethereum’s market so XRP may not be going back up any time soon.

This is also the case because data from Datalight show that more new accounts are created on the Ethereum network every day. Spot swaps like this are often quite easily reversed but considering the fact that ETH has been up there for at least six hours, it may be hanging in there for a while.

Meanwhile, all top ten cryptocurrencies are in green except for Tron (TRX) and Tether (USDT) which have aced the group before. The market, however, is not stable and changes may occur at any moment so it’s hard to tell what will happen in the next few hours. It wouldn’t be surprising to see Tron (TRX) climbing up after some time though, that is a common occurrence.

Bitcoin (BTC) the lead is also going up slowly but steadily reaching up to $3,667 at press time according to coinmarketcap.com. Some analysts have already predicted another dip before the next rally but for now, the crypto community is enjoying this bullishness until things change.

Tron has been one of the most talked-about companies within the crypto circles of late, and it’s not for nothing.…

Bitcoin (BTC) Struggling To Break Above $4,000 But Showing Great Prospect In The Short-term And Long-term

The last couple of days have seen the market make a very bold move. Beginning on Sunday, the market has…