Ethereum had a massive breakout today above a long-term resistance level at $366 on Binance and $363 on Bitfinex. This breakout confirms a monthly uptrend for Ethereum, something not seen since 2017. Of course, the month has just started and Ethereum price still needs to close above this resistance level at the end of the month, however, it’s a crucial first step to reach the all-time high again. 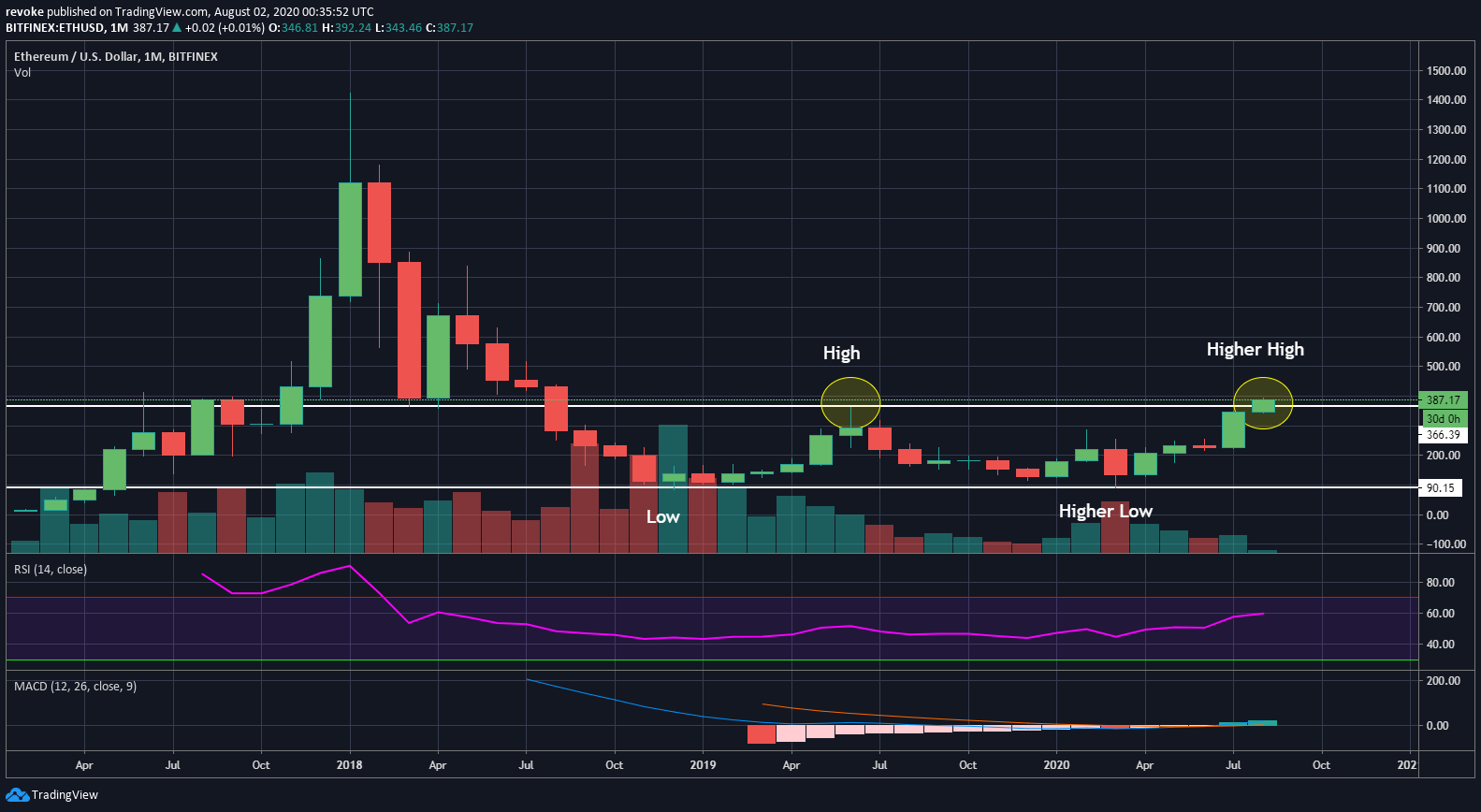 ETH is obviously overextended now but FOMO is definitely playing a big role in keeping the bullish momentum alive. Ideally, the bulls would like to see Ethereum breaking $400 before a healthy consolidation. They would also love to see a clear monthly close above $360 and absolutely confirm that monthly uptrend.

Looking at the monthly chart, we can observe basically no resistance levels to the all-time high above $1,400. ETH price might encounter a slight resistance point at $838, established in May 2018.

So, the monthly chart is not showing a lot of resistance, what about the weekly chart? The next resistance level seems to be located at $515,28, quite far from the current Ethereum price at $387. Bulls will also encounter some resistance at $838 as we mentioned before and then $979 before the all-time high. 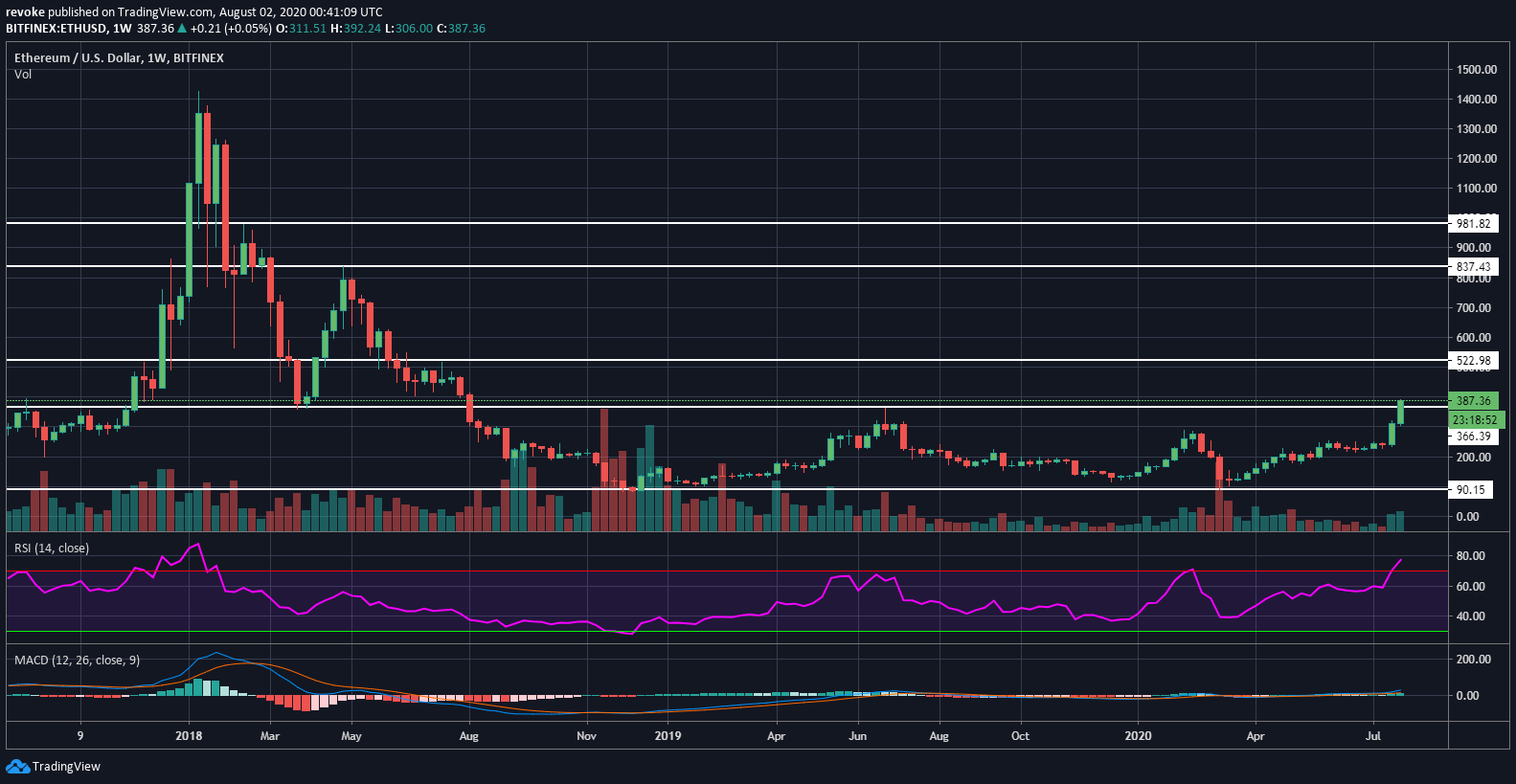 Of course, psychological levels are important, especially $1,000 but shouldn’t be a problem for the bulls considering the current momentum. The weekly chart has an overextended RSI, something that also hasn’t happened since December 2017 when Ethereum crashed down to $83, months later.

The most important positive factor for Ethereum is the increasing bull volume on the weekly chart after smashing all the important resistance levels. While the overall trading volume is still on the low end, it is increasing which is a positive sign for the bulls.

Perhaps the most significant metric is the huge increase in market dominance by Ethereum. On January 2020, Ethereum had a 7.3% market dominance and has now peaked at 12.22%, a massive surge compared to Bitcoin which lost 7 points.

When Will Ethereum Start to Consolidate?

We know Ethereum is eventually going to see a pullback and it will be big, however, it’s really hard to predict since FOMO is continuously pushing the price of Ethereum up. The daily chart is again extremely bullish and showing an increase in trading volume again. The RSI remains massively overextended at 90 points but a similar overextension was seen in February 2020. 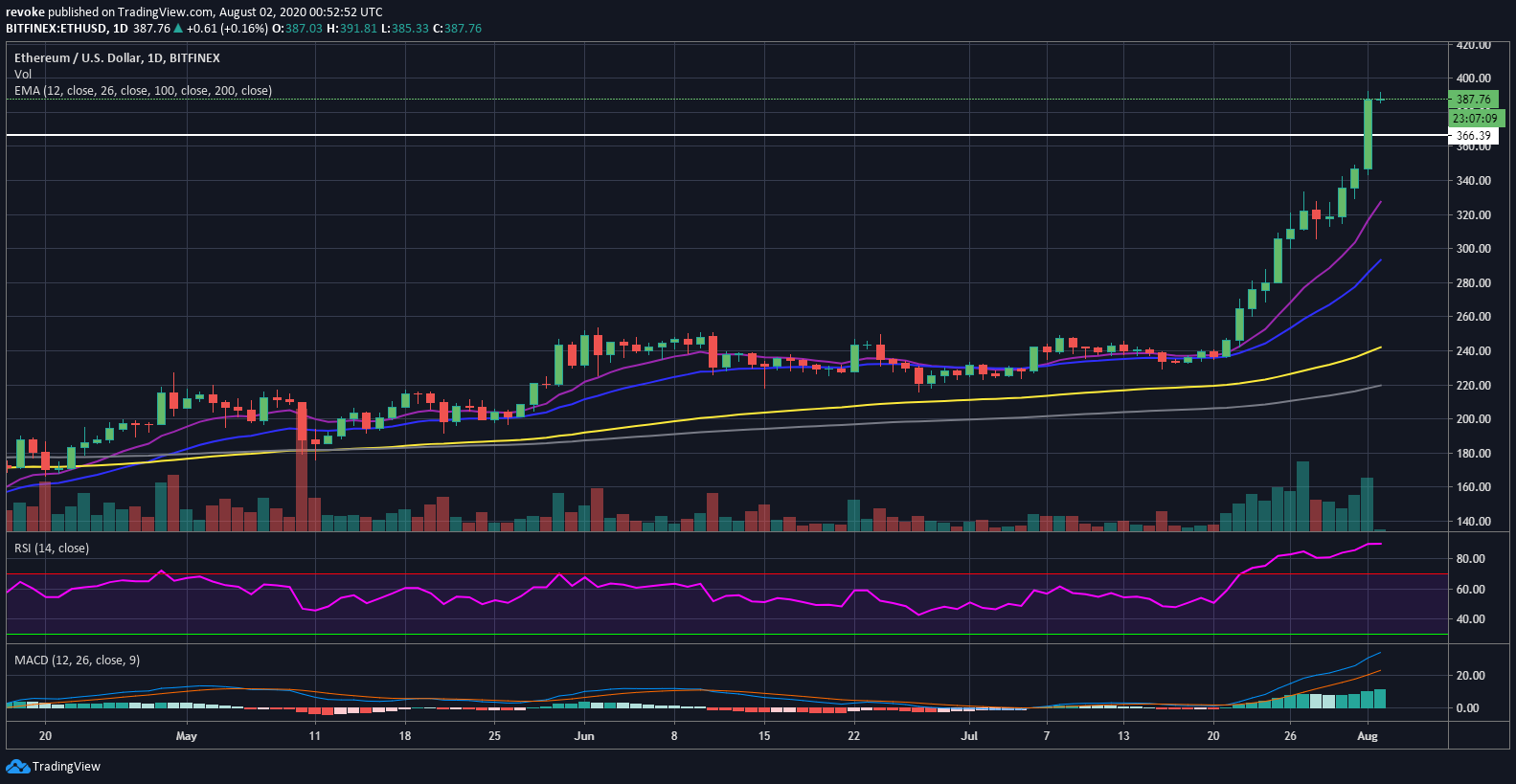 If Ethereum starts consolidating, the nearest support level is located at $327,53, the 12-EMA, and then $293,38, the 26-EMA. There is also a $306 low formed on July 28. Considering how fast Ethereum went up, there are not many support levels below but EMAs should be enough for the bulls.

Buyers could also form another daily bull flag and consolidate only down to $360 before another leg up to convincingly close above $360 and confirm that monthly uptrend.

When to ACTUALLY say Bitcoin Price is crashing down

The mainstream media LOVES to boast regular market events and turn them into clickbait articles. This has been the case…

Binance Announces Staking – What this means for the BNB Price!