Ethereum price is currently at $393 and has been trading sideways for the past week. The daily chart has clearly formed a strong bull flag awaiting a breakout. The trading volume of ETH has been dropping in the past week, indicating that a big move is nearby. 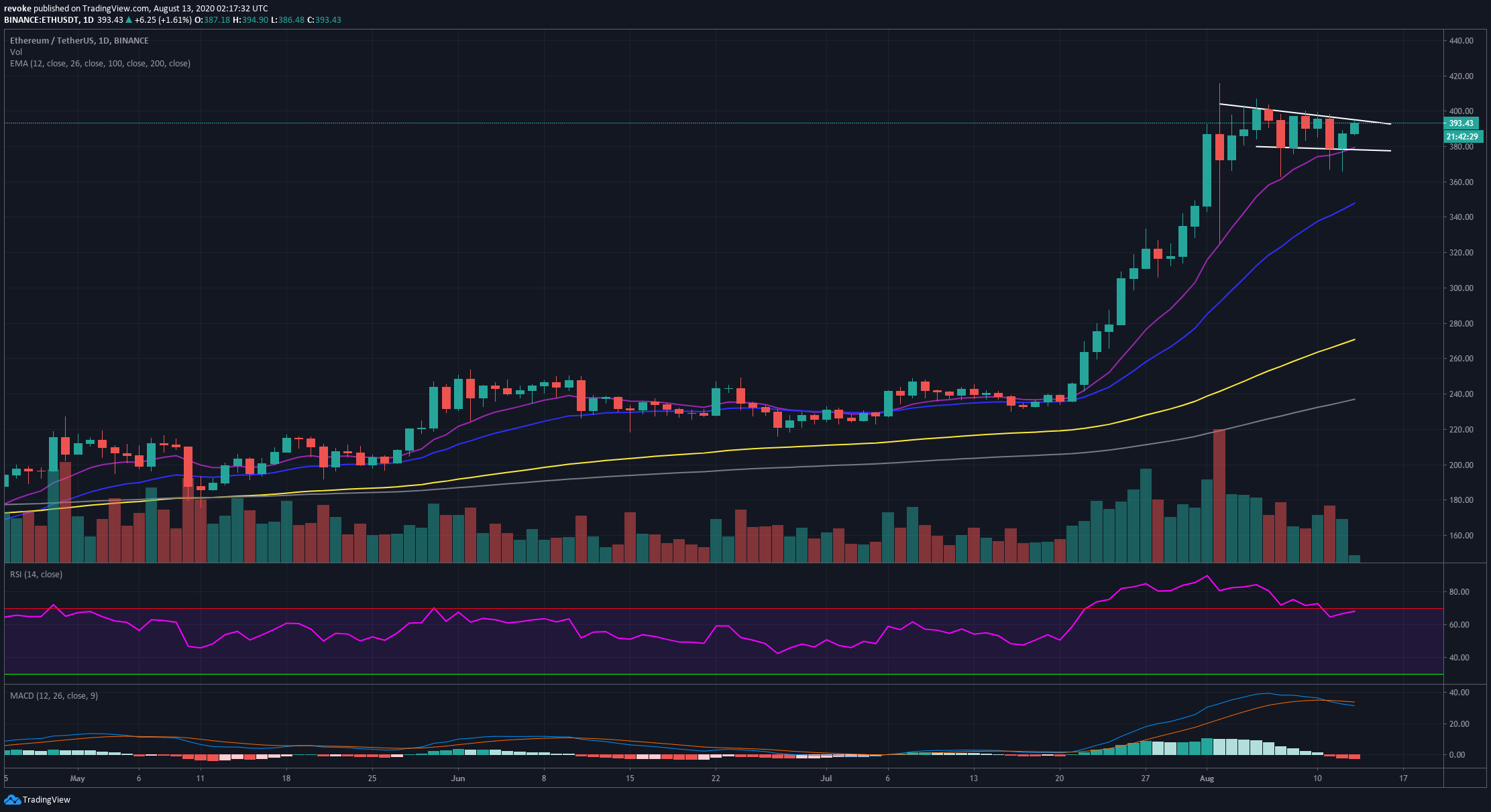 Bulls have been able to defend the daily 12-EMA several times and are now extremely close to a clear breakout above $400 that will get a ton of continuation. The 2020-high at $415.8 should pose almost no resistance for the bulls as the breakout from the daily bull flag will have enough bullish momentum. 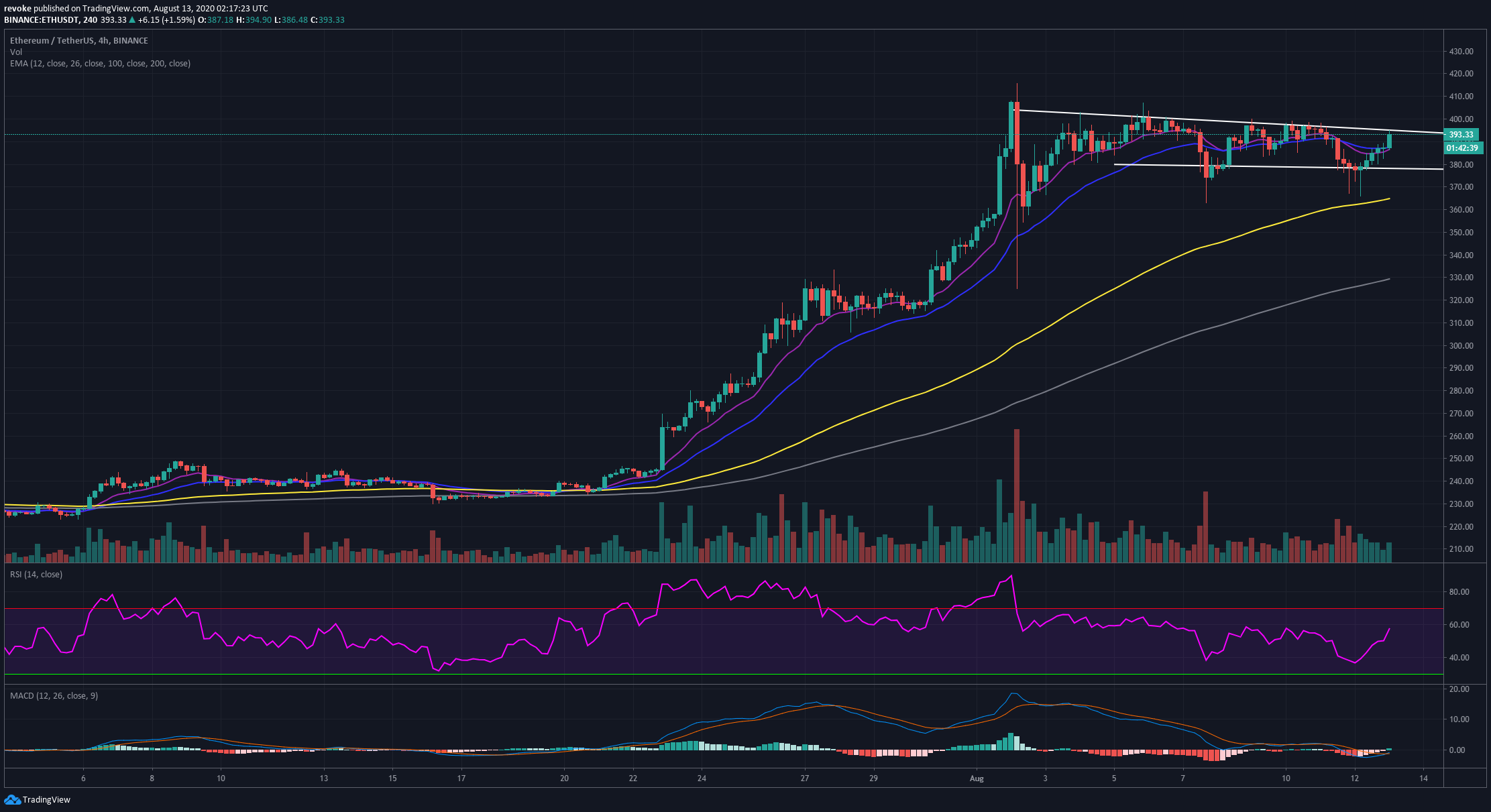 Checking the 4-hour chart, we can see Ethereum trading sideways without a lot going on. Bulls have lost the 12-EMA and the 26-EMA a few times before but bears got no real continuation. They are now back above both EMA’s which are looking for a bull cross within the next few hours. Ethereum price might explode soon above $400 because of the tightening pattern while in a clear bull rally and market.

The hourly chart indicates a clear shift in the short-term momentum as ETH has climbed above the 12-EMA, 26-EMA, 200-EMA, and 100-EMA.

The 5 Most Expensive Cryptocurrencies in the Top 100

Ignoring charts, Ethereum’s long-term has a bright outlook thanks to the upcoming update to Ethereum 2.0, one of the most anticipated updates in the history of cryptocurrencies. Although it’s still unknown when exactly ETH 2.0 will be out, developers have been optimistic lately. 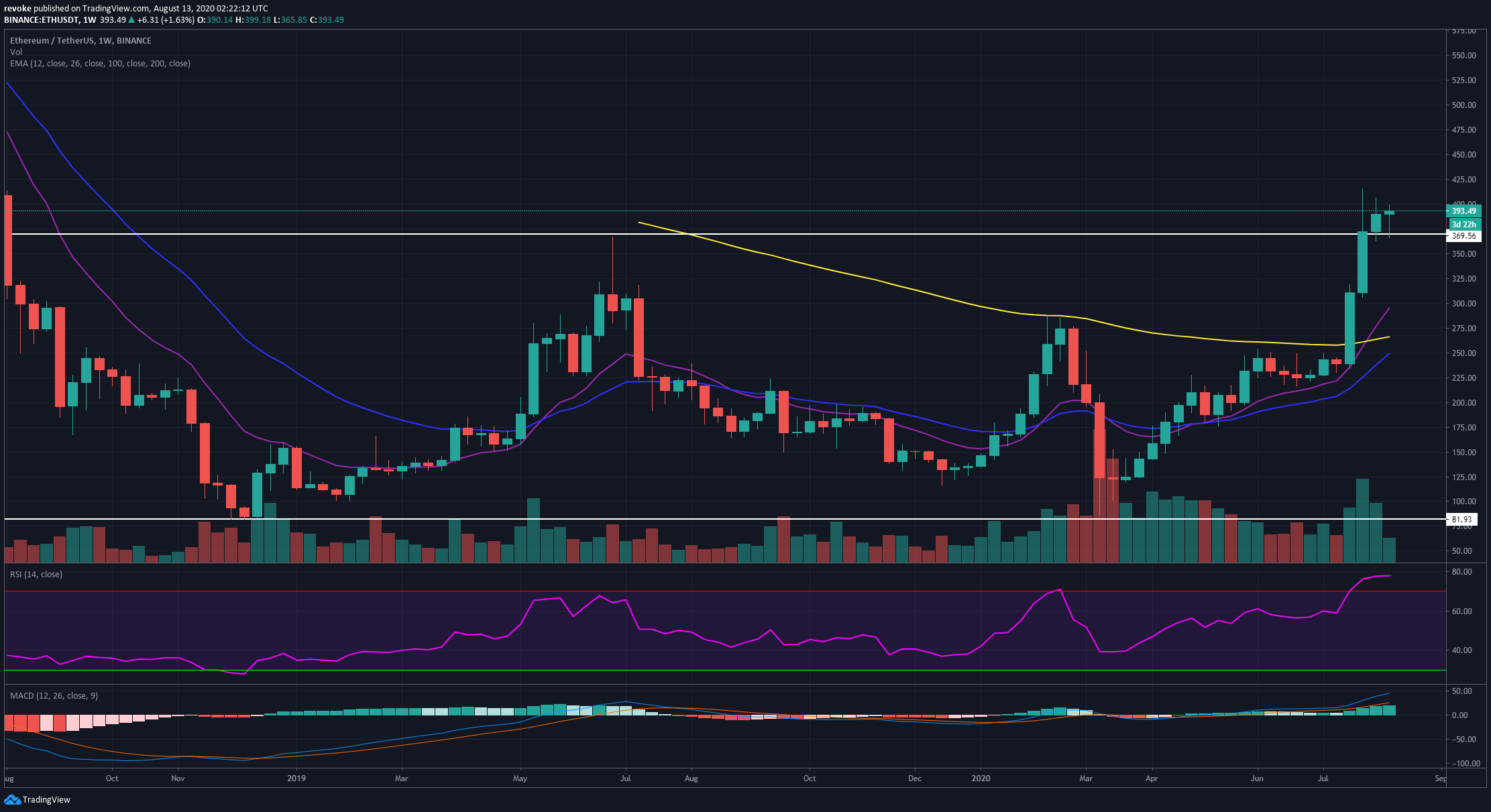 The weekly chart is extremely bullish, especially after Ethereum managed to set a two-year high at $415, cracking $366, a high established in June 2019. The breakout towards $415 had increasing bull volume and it’s reminiscent of the 2017-18 bull rally.

Ethereum also managed to climb above the 100-EMA for the first time since its 2017 bull run. The RSI is overextended, however, FOMO will most likely continue pushing Ethereum price up.

The monthly chart has also confirmed an uptrend, not seen since 2017, and Ethereum price climbed above the 26-EMA and the 12-EMA which are looking for a bull cross within the next 2 months, again something not seen since 2017. If August remains bullish, we are likely going to see Ethereum’s trading volume increase over the past month.

The amount of Ethereum held by top addresses has been increasing throughout 2020 according to Santiment. Similarly, daily active deposits on exchanges have been increasing a lot since June 2020.

However, this doesn’t mean people are selling Ethereum, the number of coins inside exchanges exploded on March 12 after the crash, however, it has been dropping to levels seen before the crash. This indicates that Eth investors are more willing to hold now and not sell even though the price of ETH has been going up in the past month.

The recent DeFi fiasco caused a lot of damage throughout the crypto market. Despite the somewhat sideways trend that is…

Time to vote: Gravity bridge proposal ready for their community.  Cosmos ATOM will share ERC20, DeFI, and other Ethereum assets. …