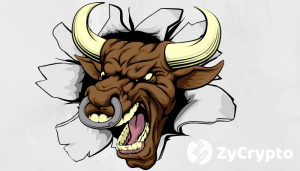 ETH/USD is on the bullish trend on the medium-term outlook. ETH price found its support at the demand price level of $103 on January 28 with the formation of a bullish reversal candle called morning star doji.

This increased the bullish momentum which pushed up the coin, broke up the former resistance level of $107, moved towards the $112 resistance level, but there is a confluence at the mark which rejected further increase in ETH price. Then, it started a sideways movement between $112 and $107; the price fell to the previous low of $103 on February 6.

Today, a strong bullish candle formed which breaks up the $116 support level and the two dynamic support and resistance. The coin is currently placed above the 50-day EMA and the 21-day EMA below it, which implies the increase in the bullish momentum. The stochastic Oscillator period 14 is at 60 levels with the signal lines point up indicate further increase in ETH price and buying signal.

ETH is on the bullish trend on the short-term outlook. On the 1-Hour chart, the coin started a sideways movement within the range of $103 and $107 price level shortly after it bottomed at $103 price level on February 6. The bulls gained enough momentum to break out from consolidation and also break up the demand level of $107 with the formation of massive strong bullish candles. ETH price is currently facing the $119 price level as the next barrier to break in case the bullish momentum is maintained.

The 21-day EMA is crossing the 50-day EMA upside as a confirmation of uptrend and the ETH price is trading above the 21-day EMA and the 50-day. The Stochastic Oscillator period 14 is at 80 levels and its signal line shows indecision which indicates that ETH price may fall as a pullback. Should the bulls maintain its momentum, further upward movement is certain.

The post Ethereum Price Watch: The Bulls Have Taken Over as ETH Targets $130 Breakout Point appeared first on ZyCrypto.

The transformations we’ve been through since 2020 made the world go even more digital. Hence, settling only with traditional ways…

Another Crypto week has come and gone with many interesting happenings as usual. For those who have missed the stories…