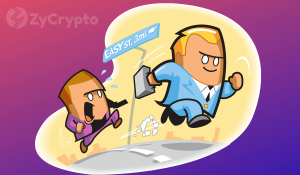 It’s been coming for some time and finally, there is confirmation that JP Morgan Bank will release the JPM coin. As we reported, JP Morgan after initially announcing they were developing their own cryptocurrency on the 14th, the bank confirmed the release of the same.

Following the announcement, JP Morgan became the first bank to issue a bank-backed cryptocurrency. According to the bank, the coin will be used to settle over $6 billion worth transactions done by the bank every day. Well, isn’t that what XRP is designed for?

Following the bank’s announcement, this has become a topic of discussion with many speculating that JPM coin could rival XRP.

One thing that ensures that JPM coin doesn’t threaten XRP is the fact that no competing party-primarily banks, will want to use JPM coin. Although a number of banks have announced that they are developing their own coins, there remains a considerable number of banks who will be interested in using XRP rather than any coin developed by a competitor.

For them, seeing JP Morgan release their own coin will be a sign that the trend of sending and receiving money has changed and they have to adopt new technology. For those that cannot develop their own cryptocurrency, XRP will be a great place to start.

Given that JPM coin will continue to be tied to the U.S dollar, it will not offer decentralization and independence as XRP does. For the cryptocurrency fans and loyalists, the JPM coin will be digital cash rather than a cryptocurrency. For this reason, it is unlikely to be adopted by users beyond JP Morgan bank customers.

By all signs, JP Morgan doesn’t seem to be competing with Ripple. The JPM coin is just pegged to the U.S dollar one to one- digital cash. Their aim is so far is to use blockchain technology and cryptocurrency to allow their customers to send and receive money in a safe, fast and cheap means.

JP Morgan has now clearly proven that the financial industry is going through a revolution and XRP has been right all along.

At the time of press, XRP doesn’t seem to have been affected by the news from JP Morgan bank. XRP is recording marginal changes which have been the state of the whole market since last weekend’s rally.

In the coming days, the coin shouldn’t be affected by the news but adoption of Ripple technology is expected to grow with a certain trend beginning to be established in the financial industry and with it, XRP prices will soar.

The post JP Morgan Coin: Is It Here To Compete With Ripple (XRP)? appeared first on ZyCrypto.

The crypto market may have gone through a rather volatile period over the last few months, but things get thicker…

When is the Best time to Accumulate Bitcoin? This Expert Investor says it’s over the next 3-6 months

Monaco based crypto trader and CIO of Digital Currency Fund, Alistair Milne must think a rally is coming soon. With…