Breaking news
Dogecoin Surpasses Bitcoin In Historical ROI, Why Did It Happen?Fintech World Counts Down To iFX EXPO DubaiBetaShares and VanEck File Application For Aussie ETFCoin Metrics Completes $15M Series B Round2local the Token of the Year
Learn & Earn Free TON Edition is an experiment at heart. Our hypothesis is that we, at CEX.IO, can be facilitators of knowledge-sharing in a decentralized way. It is in line with our CeDeFi (Centralized Decentralized Finance) philosophy. We blend the borders between two polar ways of organizing activity, centralized and decentralized. While the latter gives more freedom to participants, the former makes participation easier.

Since it’s the first time we are doing such a program, we learn as we go. We might stumble a few times along the way and wing it in a few places. But, so far – it’s been fun.

After a few days of question submissions, here we are – at the Validation stage.

The task is to ensure that the questions we received up to now make sense and meet the eligibility requirements.

Not all of them do! Out of 165 questions we received, under 50 pass the minimal quality requirements we described at the start. Others were either not unique or not eligible – and we gave a few examples of those HERE. So you can do better in the next round.

And here’s how we want to do it:

We’ll go into the details of what it means to validate a question later. Now, let’s see the general flow:

The questions that passed the initial screening will go into packs for Validation. We’ll be sharing these packs on the rolling basis.

(Think transactions going into the memory pool, waiting to be picked up by miners/validators.)

Anyone can be a Validator of questions, as long as they do a good job.

(Just like in a blockchain, a malicious validator gets ousted eventually. We only reward those who adhere to the rules and act in the interest of creating the best questions.)

It takes 3 validations for a question to pass. First come, first serve basis!

(You know, how Bitcoin miners compete who mines the block first? Same here, you need to be among the first 3 validators. And if you are not, even if you’ve done the job – no cigar!)

Validated by 3 validators, the question moves to the final Approval stage. In this stage, we’ll take a final close look at the question, polish it, brush it up, spray a bit of perfume, and put it into an APPROVED basket with a ribbon.

If a question is approved – everyone gets a reward: the creator and validators who answered it right!

We want to see as many questions to pass like that. And yet… nuances are possible.

What it means to validate a question

You’ll look at a set of questions with multiple answers. For each question, you have 3 options:

Option 1: Choose a correct answer AND suggest how a question can be improved.

Once you’ve added the answer and improvement suggestions, you’ve Validated the question.

Even if you do not suggest an improvement, you will receive a smaller reward (more on that later), and the Validation counts.

Now, if your answer is wrong – there is no reward for that – but the question is still validated.

Option 2: Write NA, meaning the question is conceptually wrong, and explain why.

Once you place an NA, it means you’ve Rejected the question. And, you can get rewards for properly rejecting invalid questions.

Option 3: Skip the question if it is yours or you do not want to answer it.

Before granting the rewards we will check whether you validated your own questions. No cheating!

Now, about the rewards. What are you going to be rewarded for?

If we thought people would not try to game the system for an easy reward, we’d be naive idealists. Been there, done that.

That’s why there are nuances we want to discuss. The “sunshine” scenario where the question is good, receives 3 validations in a row will probably be a rare occurrence.

So, let’s look at nuances and scenarios.

Since we cannot time when 3 validations are complete (they will be all time-stamped), you may get to a pack that’s been already validated but remains open. Remember bitcoin miners? The first gets the prize. So be on a lookout.

If the question is eventually APPROVED, only first three people who validated AND answered it correctly will get a reward.

Validation is done on per-question basis. So three validations rule applies to individual questions rather than the whole pack. Feel free to skip around.

Validation of each pack will be open until at least 3 (but can be more – see above) validations are received.

A question receives ALL Validations (no Rejects), but turns out to be wrong on the final review by us.

This can happen if some smartypants group hijacks a validation pack and validates all questions without actually regarding if they are right or wrong. We call it throwing spaghetti against the wall. Something may stick.

And that’s why we have a final review stage, including the review by developers who integrated Free TON on CEX.IO. If the final review concludes that the question is wrong by the way it is asked  – nobody gets a reward.

Result: no one gets a reward, neither a creator, nor validators.

A question receives SOME Validations and SOME Rejects, but turns out to be wrong on the final review by us.

This can happen if some people in the mix are paying more attention than others. Some are doing it seriously and some, just for rewards.

Result: only those who rightfully rejected the question will get a reward. The creator does not get a reward.

A question receives SOME Validations and SOME Rejects, and turns out to be right on the final review by us.

This scenario can take place for the same reasons as the one above. After all, nobody knows everything.

Result: only those who rightfully Validated the question and also answered it correctly (up to 3 validators) PLUS the creator will get the reward.

A question receives ALL Rejects, but seems to be alright for us on the final review.

There can be merit in this, and we may be deeply confused

. Or some validators decided to exploit the program by rejecting all questions at bulk (throwing a different kind of spaghetti).

Since we only want to reward the effort that looks reasonable, our developers, who integrated Free TON into the CEX.IO ecosystem, will have the final word.

Yea, all these scenarios to follow! But here’s the most scientifically designed table to keep them in mind and make it easy: 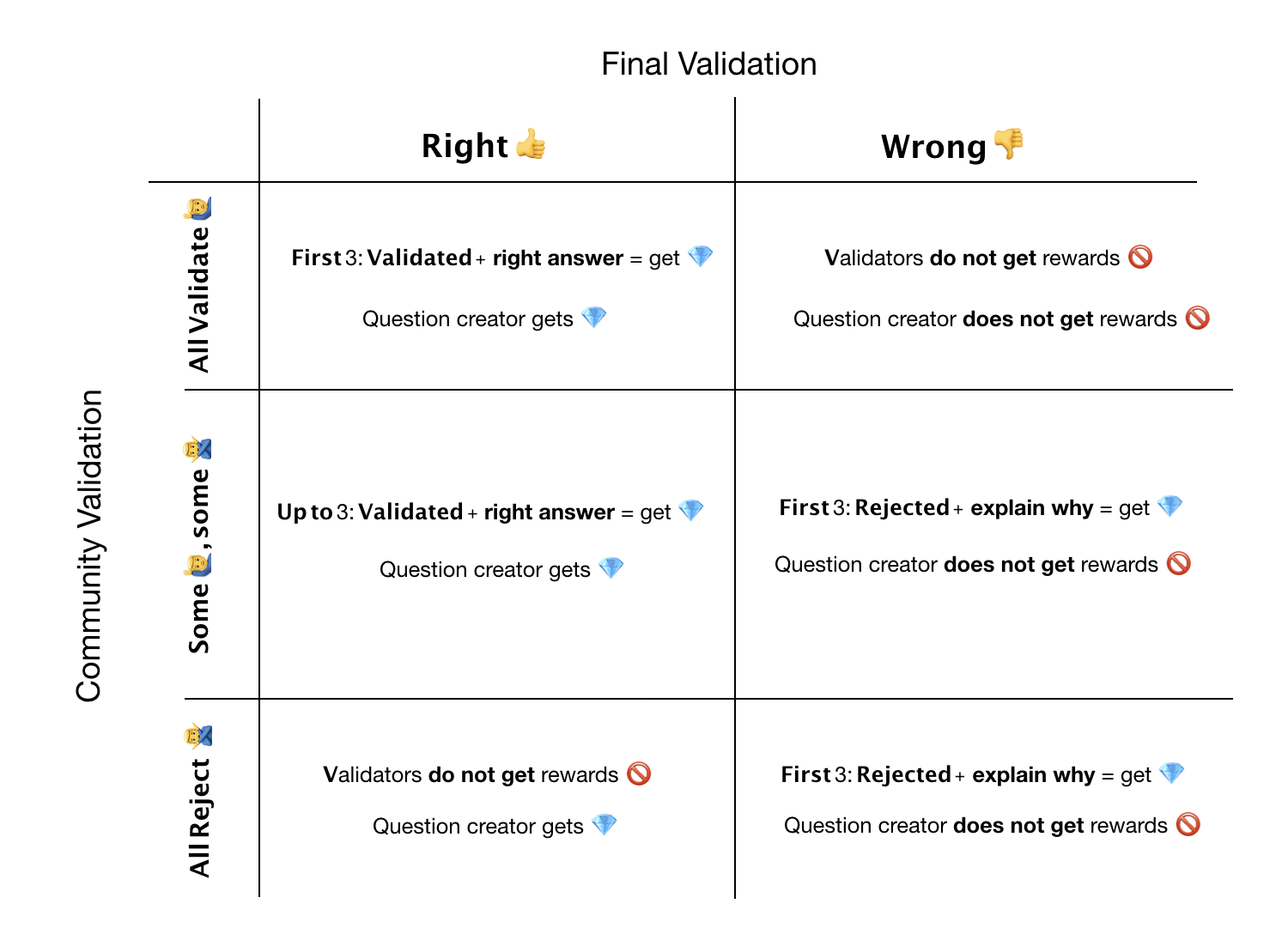 For questions that are approved, as you already know from HERE, rewards are:

You validated a question by giving it a right answer and improvement suggestion. The question was approved → 2 TON Crystals reward.

You validated a question by giving it a right answer but NO improvement suggestion. The question was approved → 1 TON Crystals reward.

You validated a question but did not give the right answer, regardless of whether you offered improvements. The question was approved → No reward (because you should know your stuff ;))

You rejected a question and gave the reasoning why. The question got rejected →  1 TON Crystals reward.

You rejected a question and did not give the reasoning. The question got rejected → 0.5 TON Crystals reward.

Where do you get the validation packs? We’ll drop them in our Telegram Group, Free TON Forum, our Twitter, and Facebook. So keep your eyes glued to these channels!

That should be it.

The first validation pack is about to drop! Brain powers ready. Ignition. Validation Stage, we have a liftoff!

We are officially announcing the starting of the first in the history Validation Stage for Learn & Earn Free TON Edition!

You need to validate one or both of the forms below:

Remember, only the first 3 validations will count for the reward!

Five years is an eternity in crypto. Since Cloudbet first launched, the landscape has changed countless times. One thing has…

Elon Musk says he has no Crypto Holdings after saying Bitcoin is the Future, How Ironical?

Tesla co-founder, CEO and product architect Elon Musk has made a shocking revelation that he holds no Cryptocurrency following his…