The Edmonton, Canada, based Aurora Cannabis, Inc.’s stock turned bullish over the last few days after it announced that two of its facilities are now fully licensed by Health Canada for the production and sale of cannabis on February 25, 2019. According to the press release, Aurora Sky and MedReleaf Bradford facilities have received the license and add over 128,000 kg per year in capacity for the company.

The second news that stirred the market on February 27 was about acquiring 51% shares of Portugal’s Gaia Pharma Lda, effectively giving Aurora Cannabis Inc. the management control over the company. While the terms of the deal are not disclosed, sources indicated that Aurora Cannabis Inc. plans to establish a local facility in Portugal to produce medical cannabis and derivative products for the fast-growing European market.

It is worth mentioning that Gaia Pharma Lda recently won the approval from the Portuguese Health Ministry to build a European Union GMP-compliant cannabis cultivation facility. However, it will be now renamed as Aurora Portugal, Lda and act as the growth catalyst for Aurora Cannabis, Inc.’s ambitions in the legal Cannabis market in the European Union. 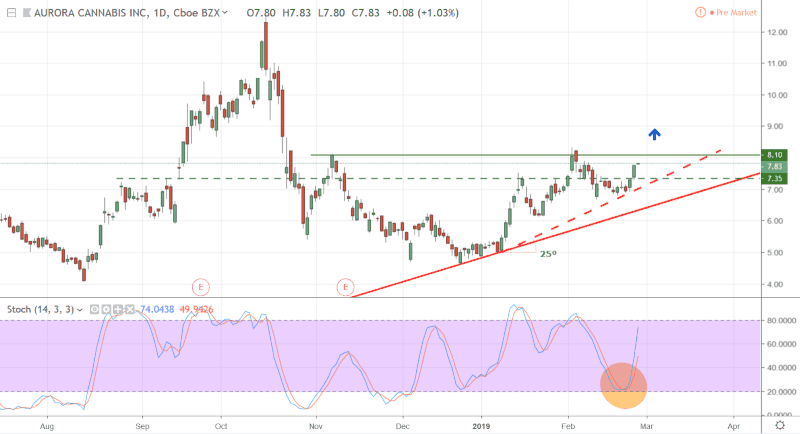 Since the news regarding obtaining a license from Health Canada for two of its production facilities, Aurora Cannabis, Inc.’s stock has gone up from $7.00 per share, and currently, it is trading at $7.83 per share, representing an 11.86% increase over the last three days.

On February 27, the bullishness found renewed momentum after the news of acquiring 51% stake in Gaia Pharma Lda was made public.

These two major fundamental developments caused the daily timeframe Stochastics to produce a clean buy signal, which will likely push the stock towards the next significant resistance around $8.10 per share. If we see a clean break above this major resistance, it will likely open up the possibility for a long-term uptrend for Aurora Cannabis Inc. As a result, we might see the stock trading near the $12.00 per share level over the next few months, which was the high from October 2018.

Although Aurora Cannabis, Inc.’s stock is trading with a price-to-earnings ratio of 35.88, it is natural for growth stocks to have such high P/E. With $7.48 billion in market capitalization, Aurora Cannabis Inc. is one of the most significant players in the newly regulated Cannabis industry in Canada. Moreover, with the acquisition of Gaia Pharma Lda, it appears that they are eying the long-term prospects of the industry in the international market.

Yesterday, the market saw a nice mini-rally. BTC price gained 5% (Bitstamp) and is now trading at the $3650 price…

Binance Coin price has just hit $68 on Binance for the first time ever. The digital asset is up by…