XEM/USD is struggling to break above $0.21 but could pump to $0.50 around the launch of Symbol (XYM)

NEM (XEM) is trading lower on the day, down by about 2.9% as altcoins mirror Bitcoin’s struggles since dipping from highs above $40,000.

However, while the immediate outlook for XEM price appears negative, it could lift off in a massive pump in the coming weeks. This is because of all the excitement building around the anticipated launch of a new blockchain network called Symbol (XYM).

Although the NEM community has voted to postpone the snapshot of XEM holders, the market appears beefed up for the upcoming airdrop of the XYM token. According to NEM support, Symbol will have a token supply of 9 billion, with XEM holders receiving the new token at a ratio of 1:1 as per the snapshot.

Already, several major cryptocurrency exchanges, including Binance that is running a $50,000 XEM competition, have pledged to support the XYM airdrop.

It is therefore likely that the price of XEM pumps, as it had started before the community voted to push back the Symbol (XYM) snapshot from 14 January to February.

NEM is ready for a massive bullish move as an uptrend formation remains despite recent dips.

The weekly RSI has turned lower from overbought conditions and could offer a massive buying opportunity as more holders look to get the XEM tokens.

XEM currently trades around $0.20 and could dip to the support line around $0.17. A weekly close around this price level will call for more buy orders, likely initiating the kind of buy-side pressure that might see bulls rally to new highs.

During the last quarter, NEM prices rallied over 170% in four weeks between 23 November and 14 December. If an uptrend forms and a similar trajectory occurs, XEM/USD could rally 150% from a weekly close near $0.20. It suggests the next few weeks could see buyers push to new highs around $0.50. 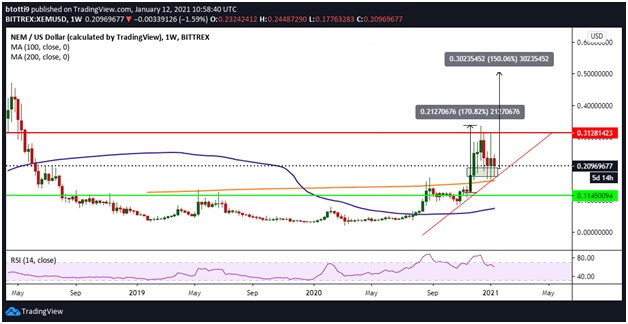 The positive outlook will remain in place as long as bulls also hold prices above the main non-horizontal support line at the 200-SMA ($0.16).

A break below this level will invalidate the perspective and invite extra downward pressure in the short term. A run to the 100-SMA could allow shorters to take charge and dump XEM even more.

William Hinman worked at the US Securities and Exchange between 2017 and 2020, with one of his high-profile statements at…

If Bitcoin tanks below $13,000, LINK/USD will likely fall to prices below $10.00 ChainLink’s downward action threatens to wipe all…