Following a few rather turbulent months, the cryptocurrency market slowed down. However, Bitcoin’s volatility fails to do any grace with the peace of mind of investors. Currently, we can’t seem to see new money in the market and many investors are sitting on the sidelines to test the direction of the wind.

At the same time, it’s important to note that the trading volume increased steadily ever since April,

even though it should be remembered that the volume is not under full supervision and oftentimes some exchanges do not reflect real activity but rather an attempt to manipulate investors. After all, the cryptocurrency market is still relatively young and small, hence strong players are capable of moving the market. We can see the distribution of cryptocurrencies in the market as of today according to Chainalysis:

Regulation is here and it’s no longer possible for legislators to ignore the crypto phenomenon which continues to gain momentum. Facebook’s Libra has raised the issue of digital currencies to the top of the agenda and many executives in the global economic systems have already expressed their positions on the matter, including the US President Donald Trump. Despite the many concerns which surround the Libra project, there is no doubt that it will be promoting the regulatory debate on the subject. We expect to see more and more regulators looking closely at the industry and issuing their guidelines and clarifications as well as stringent enforcement over exchanges, fundraising, and so forth.

Despite the attempts of several altcoins to break through, it seems that it’s still quite early for another Altseason, especially as most of them experienced massive losses in the past few months. In addition, Bitcoin’s volatility doesn’t contribute to currency trading and traders are waiting for signs of stability that will give them some confidence.

In addition to the colorful altcoin market, we hear more and more about companies such as Telegram, Facebook, and other giants, looking to issue their own cryptocurrencies, along with many countries and banks which are testing the new technology in an attempt to benefit from it. At the same time, there are those such as the Palestinian Authority who are considering replacing their own currency with digital currencies in order to eliminate the dependency on the Israeli economy.

In conclusion, it’s probably safe to say that cryptocurrencies are here to stay and it’s hard to remain indifferent to the events of late and the ivory towers already realize that this potential has to exhaust. 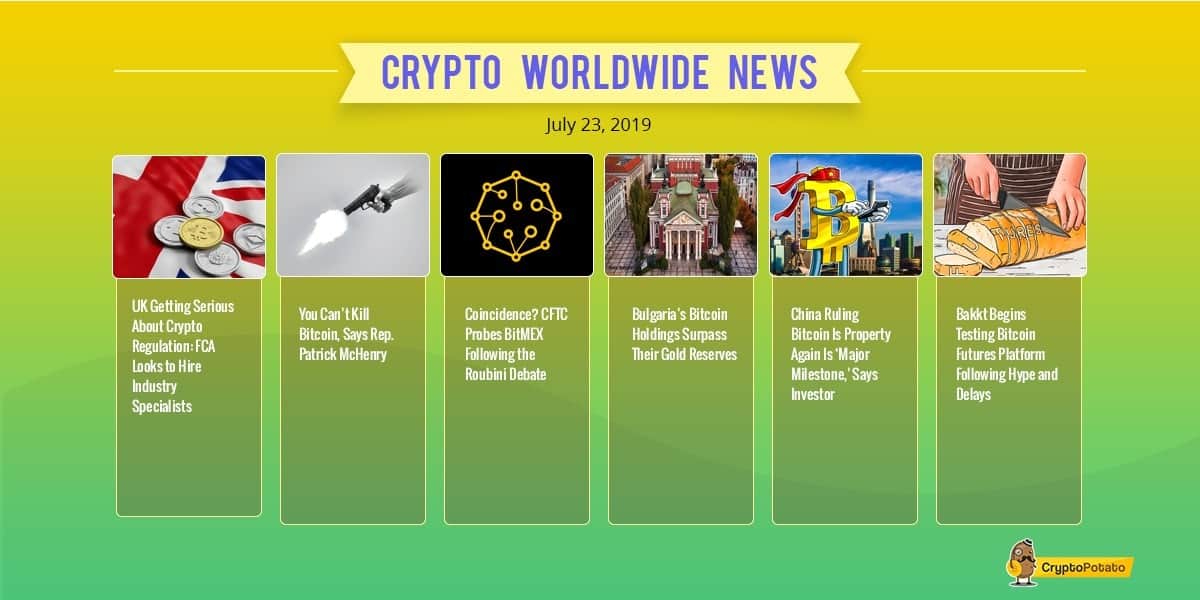 UK Getting Serious About Crypto Regulation: FCA Looks to Hire Industry Specialists. The Financial Conduct Authority (FCA) of the UK, which is responsible for governing the country’s financial markets, is taking steps to increase its involvement in the crypto space. The regulator is looking to hire specialists to join two of its specific divisions.

You Can’t Kill Bitcoin, Says Rep. Patrick McHenry. The US Congressman Patrick McHenry, serving North Carolina’s 10th District, has said that even the Chinese can’t kill Bitcoin. He also said that there are a lot of other projects which are trying to mimic it but that they aren’t fully distributed and they are not fully open.

China Ruling Bitcoin Is Property Again Is ‘Major Milestone,’ Says Investor. In what seems to be a major milestone for Bitcoin, a second Chinese court has ruled that attributed property status to the cryptocurrency. Industry experts consider this to be a significant step forward for the space in the country.

Bakkt Begins Testing Bitcoin Futures Platform Following Hype and Delays. The highly-anticipated launch of Bakkt’s user acceptance testing (UAT) kicked off. The platform is starting to accept users for trading its Bitcoin Daily and Monthly future contracts from all over the world.

Days after executing the cyberattack against a New York-based law firm, the notorious hackers’ group REvil has doubled its demand.…

Crypto credit cards have pushed the adoption of cryptocurrencies as a method of payment like no other innovation. Holders of…