Ren (REN) price rose 25% on Sunday to hit highs of $0.493 as active addresses also jumped to a seven-day high

Ren’s native token, REN, is facing increased downward pressure and has not been able to sustain the upside momentum seen over the weekend.

The cryptocurrency surged by more than 25% in 24 hours as bulls rallied to hit $0.493. Trading on Monday has been characterised by a series of lower highs, moving prices further away from the local top.

As of writing, the altcoin is trading at around $0.369, down nearly 18% since hitting the new high.

According to Santiment, the 25% price surge for REM/USD since Sunday is part of a breakout that “coincides with a 7-week high in both daily active addresses and social volume”.

The analytics firm suggests that traders need to watch the market keenly as the DAA and social volume metrics offer “contradictory” signals. The daily active address is an indicator that drives price, in contrast to the social volumes metric that has often indicated an asset’s local tops. 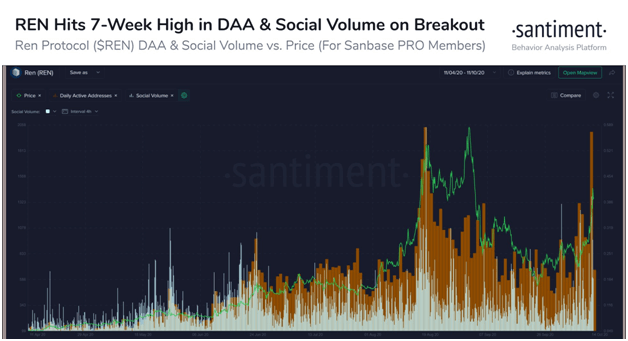 The pair is also trading below the 10-day simple moving average at $0.38, with the Relative Strength Index (RSI) pointing lower towards bearish control.

As such, REN/USD might struggle to break resistance around $0.40. The likely scenario is that a continued reversal takes the pair back to lows of $0.33 of the swing high to $0.493. The immediate support level lies at the 50-day simple moving average around $0.345. 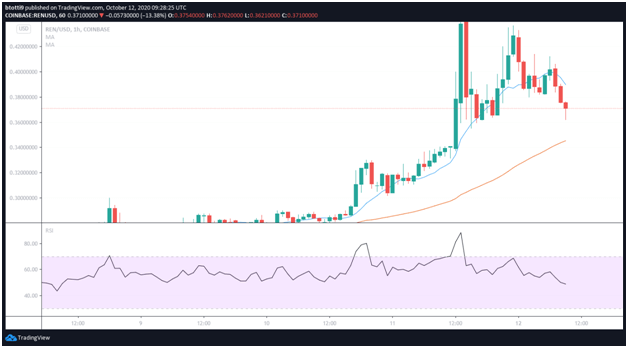 A long-term view for the token shows that REN remains positive, but bulls must hold prices above $0.33. This is the area that provided the major support on the uptrend to prices just shy of $0.50.

Several altcoins had a great weekend to mirror BTC/USD rallying to highs of around $10,500. However, as the top crypto hit consolidation, many of the tokens have continued to rally higher.

ChainLink (LINK) is up nearly 12% as bulls look to break above $12.00, while Binance Coin (BNB) joins privacy coins Monero (XMR) and Zcash (ZEC) in posting double-digit gains in the past 24 hours.

Cryptos are not the ideal form of digital currencies: BoE Governor