XRP has performed poorly since the start of 2018. At its peak, the digital asset had around 17.6% market dominance, however, it has slowly started declining, currently only at 3.2%. On the daily chart, the price of XRP formed a descending parallel channel that finally saw a notable 6.5% breakout on October 4. 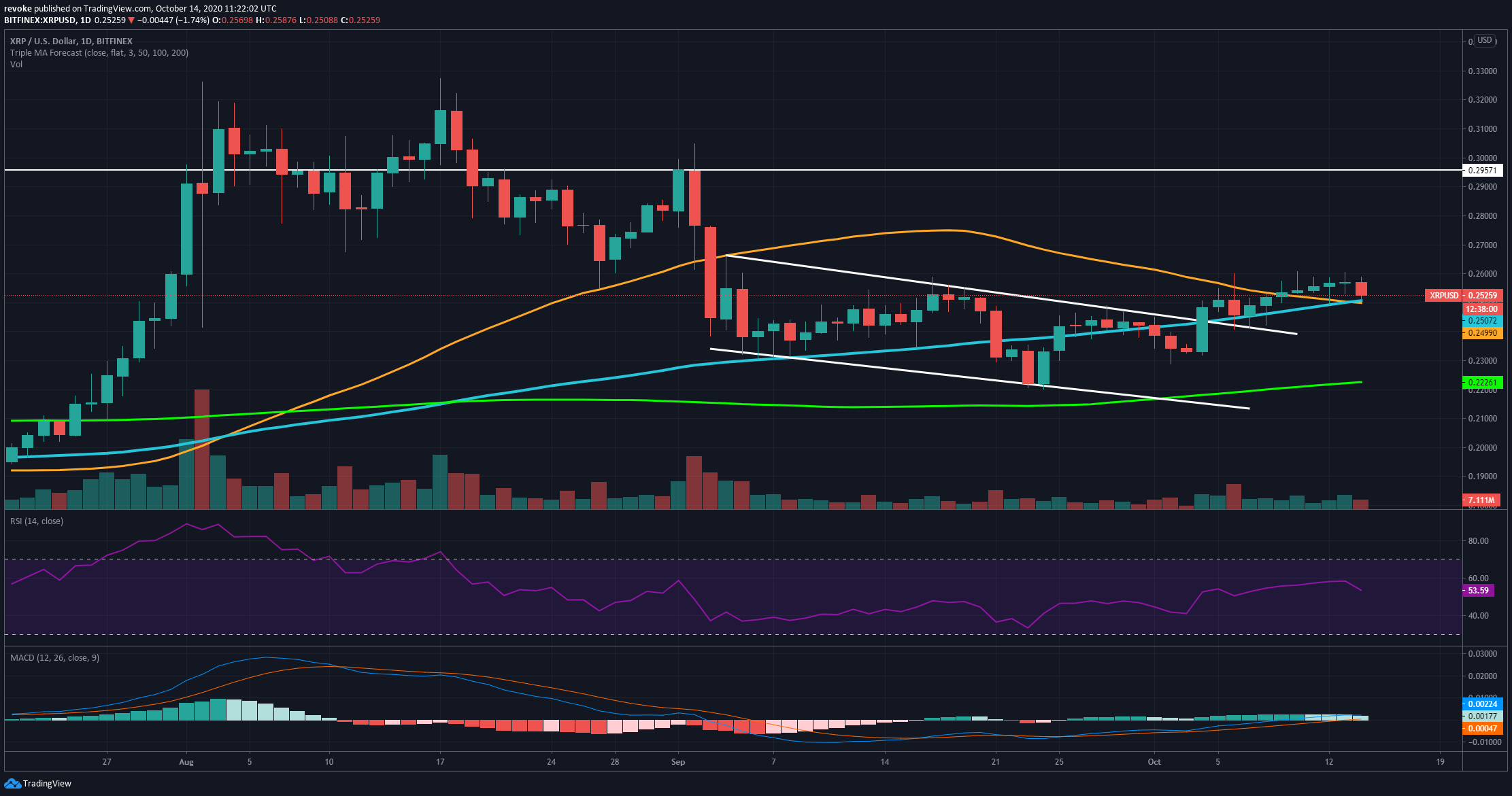 The bullish breakout played perfectly, closing above the upper boundary and then re-testing it as support in the next few days while holding the 100-SMA. Bulls got enough continuation to crack the 50-SMA and turn into support as well.

XRP price is currently re-testing both the 50-SMA and the 100-SMA as support levels but has already established a daily uptrend after setting a few higher lows and several higher highs.

The RSI is not overextended at all and has left more room for the bulls. The MACD has been bullish since September 17 and shows no signs of weakness just yet. The next target price for XRP is the $0.26 resistance level followed by the psychological level at $0.3.

David Schwartz, the CTO of Ripple recently posted a Tweet saying that he bought around 40,000 Ethereum in 2012. However, his wife insisted on a derisking plan which made Schwartz sell many of his holdings right then. The CTO owned Bitcoin and XRP and sold both for $750 and $0.10 respectively.

The idea to sell the ETH was only his, he asserts. At the peak of Ethereum, that would have been close to $56 million.

On the other hand, Brad Garlinghouse, the CEO of Ripple criticized the lack of regulatory clarity in the U.S.

However, last week’s DOJ report lists 8 separate US reg bodies each with a different view: crypto is property, crypto is a commodity, crypto is a virtual currency, crypto is a security, etc. Regulation shouldn’t be a guessing game. https://t.co/B18ZIVodZC (3/5)

Garlinghouse warned that if the regulatory framework doesn’t improve, perhaps they will be forced to move out.

if we need to move to another country to get that, then that’s the path we will have to take.

Additionally, the CEO also heavily criticized US regulators for making decisions that ‘actively favor Chinese technologies OVER US companies’.

Nonetheless, Kraken is the first cryptocurrency exchange to become a US Bank, after an announcement in September.

This Coin is Now Outperforming Bitcoin

Bitcoin is in the middle of a bull run, with the price having risen by more than half since mid-July.…

DeFi On Binance Smart Chain: What is BurgerSwap?

The DeFi world is full of innovations and new developments. In April 2020, Binance announced its new Binance Smart Chain.…