Ripple’s XRP is looking to break higher and rally past recent highs after a terrible fall following the SEC lawsuit. It didn’t help that several major exchanges then either suspended or delisted XRP, while Grayscale Investments also moved to fold its XRP Trust.

Last week, Ripple released its Q4 2020 XRP Markets report in which the company lamented the impact of the US SEC’s lawsuit filed in December.  According to Ripple, the damaging impact of the charges saw XRP miss out on a 50% rally in the rest of the market.

“By bringing this case, at least $15B of XRP value was lost in the open market–this does not take into account the 50% rally in the rest of the crypto market over the same time period.”

An attempted pump also failed to hold as prices flipped swiftly to see the cryptocurrency trade at lows of $0.3589 after hitting highs of $0.7550.

But an uptrend has recently picked up. This follows an overall uptick in altcoins and specific XRP news from Japan’s SBI Holdings. The investment giant announced last week that it would support XRP lending via its subsidiary platform SBI VC Trade. XRP is only the second cryptocurrency on the SBI lending platform, the other being BTC.

This week, the XRP/USD pair has put together four consecutive green candles, with the latest pullback from highs of $0.5429 dissipating just under the 0.5 Fibonacci retracement level of the decline from $0.7900 high to $0.1684 seen over the last two months of 2020.

Although it has dipped from 10 February highs of $0.5429, it remains above an ascending support trend line. 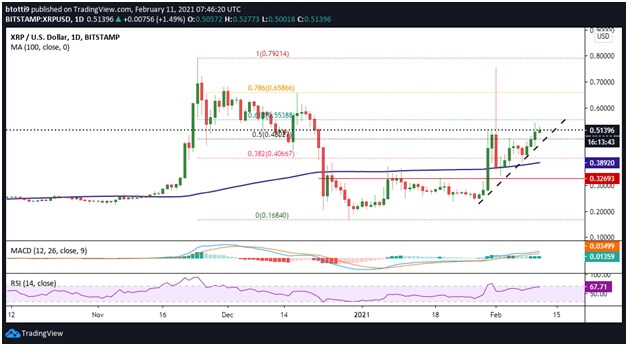 A look at the daily chart shows that the MACD and RSI signals support a continuation of the upside. The main target for bulls is the 0.618 Fibonacci retracement level at $0.5538.

If upside action propels XRP over the hurdle, $0.6586 would provide the next focus, with a run to the year-to-date peak of $0.7500 providing added urgency. The uptrend could then extend to the three-month top at $0.7900.

On the contrary, an influx of selling pressure around current prices or the next hurdle could inform a change of direction. A pullback to the 0.5 Fibonacci retracement level ($0.4802) could allow bears to target the zone below the trend line support, with the 100-SMA at $0.3892 and an old horizontal support line at $0.3269 providing further buffer zones.

Where to buy Filecoin: 20% daily gains for FIL

Filecoin has one of the most interesting real-world applications in the crypto sector Filecoin (FIL) has surged in price today,…

Baby Moon Wolf coin is one of today’s top performing cryptocurrencies. This article delves into the investment proposition and tells…