Ripple (XRP) price has dropped beneath crucial support that could give way to a 35% dip to lows of $0.30

XRP has dipped to prices below $0.45 and could sink even further as sell-off pressure mounts. The most recent rot in the Ripple price history comes on the back of a potentially costly lawsuit.

According to the US Securities and Exchange Commission (SEC), Ripple and two of the company’s executives are alleged to have offered unregistered securities worth $1.3 billion.

While Ripple has maintained that XRP is not a security, the SEC lawsuit says otherwise. The price action when the news first broke and over the past 48 hours has been largely headed in one direction—down.

Where XRP trends next appears straightforward, but the outlook could change if bulls manage to retake the support level mentioned below.

Ripple price on the daily chart shows that bears have pushed XRP/USD below a recently formed descending triangle pattern. The drop from highs of $0.60 meant that bulls needed to keep prices above the lower trendline of the triangle pattern ($0.45) to stem the bearish trend. This support level is also near the 50-SMA at $0.46.

As seen on the chart, bears have taken over the action since the SEC news broke and as prices dip below the trendline, the 50-SMA now threatens to give sellers a 35% ticket to do more damage. 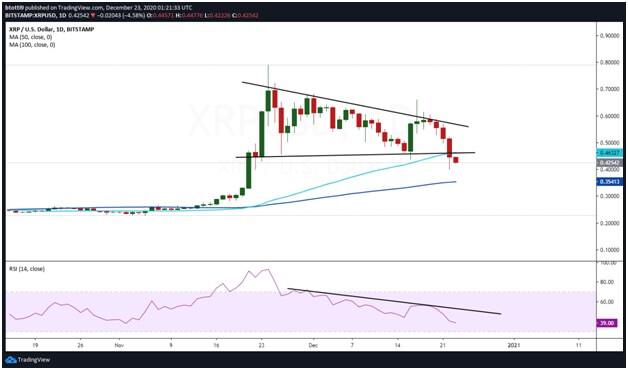 The 4-hour chart presents a similar technical outlook, with the RSI still diving into the oversold territory. Currently, the XRP/USD pair is well below both the 50-SMA ($0.54) and the 100-SMA ($0.53). The downturn means bulls might struggle to reclaim the critical support level near $0.45, a zone that could aid bulls’ slim chances of a quick rebound. 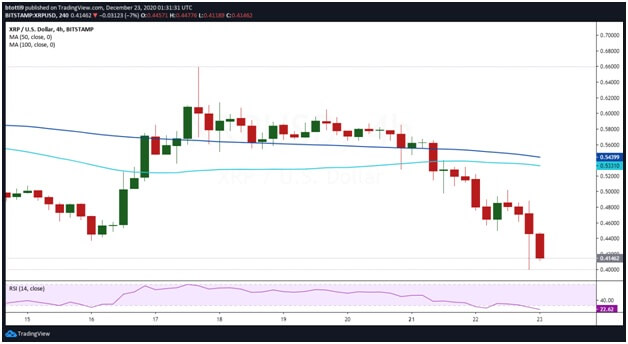 XRP is currently changing hands around $0.41 and looks likely to extend losses beyond the 20% fall suffered in the past 24 hours. Ripple’s $18.4 billion current market cap at the time of writing means it has now slipped into the fourth spot behind Tether (USDT) that has a market cap of $20 billion on CoinMarketCap.

Baby Shark, a meme coin inspired by the children’s song of the same name, has gone viral this week Baby…