The price of XRP has dropped to lows of $0.22, more than 60% lower since the US SEC brought a lawsuit against Ripple and as major exchanges announce halting of trading

The value of XRP could drop to lows of $0.20 shortly if bears continue to push lower.

Before US regulator the Securities and Exchanges Commission (SEC) struck with a lawsuit, XRP had seen its value more than double during the 2020 bull cycle. The 4th ranked cryptocurrency’s price had surged to highs of $0.79 on 24 November, with bulls targeting $1.00.

The SEC lawsuit, however, saw the digital asset’s value plunge by 13% on 22 December and by more than 41% the very next day. 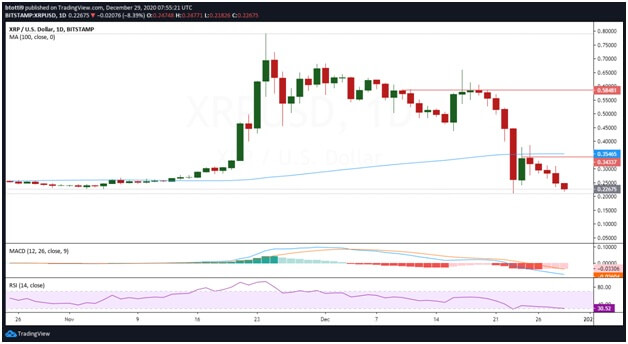 On the daily chart, the breakdown beneath the 100-SMA continues to cap upside action, with the moving average located near $0.35. The struggle with resistance at this level, coupled with the bearish outlook of the MACD and RSI, suggests that the path of least resistance could be downwards.

The XRP/USD pair has tanked by around 20% in the past 24 hours after Bitstamp and Coinbase announced their plans to suspend trading. Overall, XRP is down by almost 60% in the past week. 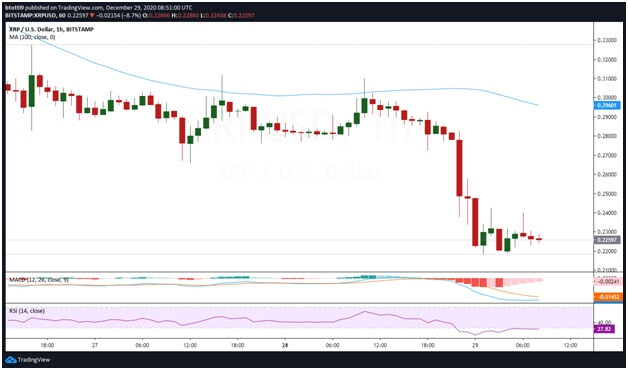 On the hourly chart, the price of XRP is below the 100 hourly simple moving average which further strengthens the short term bearish outlook. While $0.22 provides strong support, the continued rejection around $0.23 is weakening bulls further. The hourly MACD is decreasing while the RSI lingers within the oversold territory.

If bears succeed in establishing a footing around $0.20, the next stop would likely be the $0.15—$0.10 zone. According to crypto analyst HornHairs, XRP could dump to $0.009 if it breaks below its March lows. 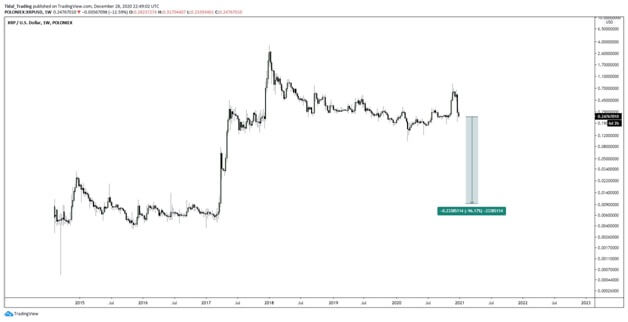 At the time of writing, the XRP/USD pair is trading around $0.22 and the downward spiral could continue should the prices break lower.

The bearish scenario will be cemented if investors dump the token following plans by major trading platforms like Coinbase, Bitstamp, OKCoin, and Crypto.com to suspend XRP trading.

Blockchain offers the benefits of smart contracts and enables greater scalability for the exponentially growing IoT market CertiK, a blockchain…

XLM/USD price is $0.072 and is turning massively bearish as the highly reliable evening Doji star forms on the monthly…