Privacy and money safeguard have become a huge concern throughout the past few years. This became even more so after the infamous Cambridge Analytica scandal which saw the information of millions of users used inappropriately without their consent and the FBI documented 166,349 domestic and international complaints of fraudulent email victims between June 2016 and July 2019, representing a total loss of more than $ 26.2 billion.

This is why people are looking for private means of communication and interaction (a market worth more than $200 billion per year). SafePost attempts to solve this issue, along with other pressing ones.

This alternative to traditional emails and document storage

Besides, there’s no need to download special software. SafePost doesn’t require a subscription and contains no size limits for the documents which are attached to the messages. According to the official website, users can attach “several hundred megabytes” to their messages.

SafePost also claims that its database is fully decentralized. It purportedly has high availability and no possibility for third-party access.

Like emails, SafePost provides you with a secured public address that allows you to exchange with the interlocutors you identified and accepted to your list of contacts. 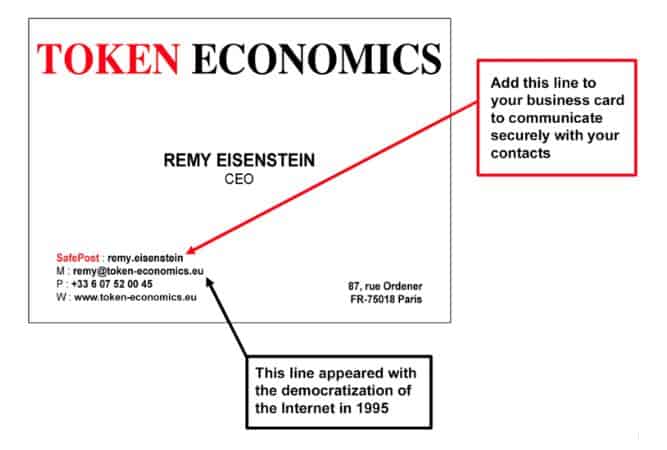 SafePost Launches An IEO From March 16th to April 19th

The team has decided to go with an Initial Exchange Offering (IEO) in order to collect the funds to accelerate the development of SafePost.

There will be four separate stages of the IEO and it will be held on the P2PB2B exchange. It starts on March 16th and will end on April 20th, 2020.

Tokens allocated are called STAMP. During the first stage, users will be able to receive a 10% discount, 7% in the second, 5% in the third, and no discount during the last stage.

According to the team’s white paper, they intend to launch the app for smartphones and tablets in late March 2020 for Android, in April for iOS and to list the STAMP token on the P2PB2B Exchange on April 20th after the IEO has ended.

In May 2020, the team plans to announce premium accounts with KYC procedures for enhanced safety, and in June they will extend their patent application abroad. Windows and macOS users will be available in September 2020.

In 2021, the team also plans to enable a secured agenda, a secured chat, a secured digital safe, and secured voice conversations in early 2022.

IEO starting on March 16th and ending on April 19th

The minimum guaranteed value for each STAMP token is set to 0.001 EUR for using SafePost services.

The post SafePost Launches IEO To Accelerate Its Development appeared first on CryptoPotato.

After announcing plans to launch a new privacy coin called GHOST, John McAfee has received numerous accusations of plagiarizing the…

Analysis: HODLing Bitcoin Has Been Profitable in 93.6% Of The Days Since August 2010

With the third-ever Bitcoin halving in the history books, the price of the asset is reacting by a notable 13%…