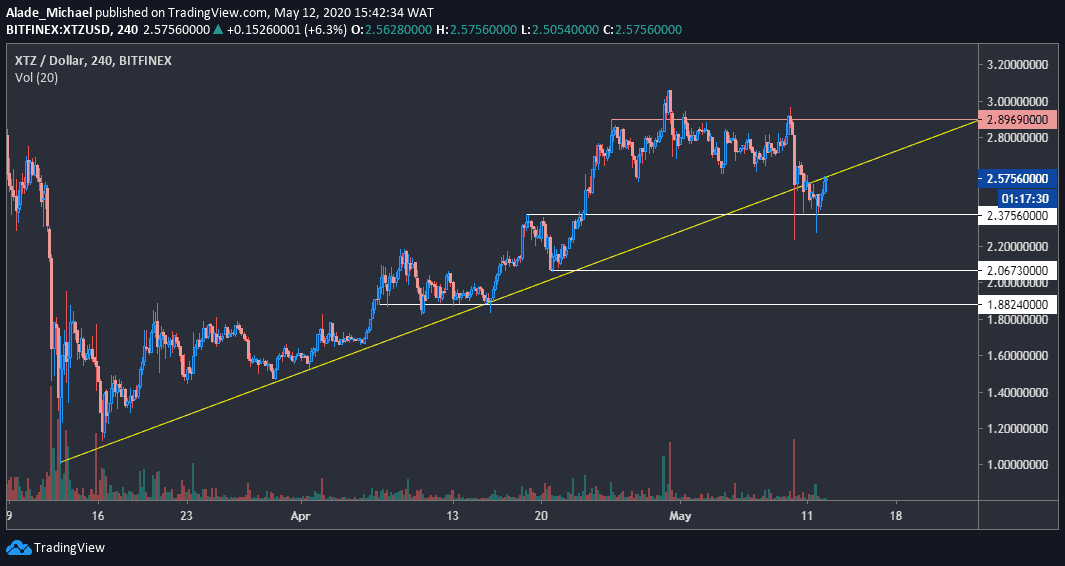 Tezos slightly lost its short-term bullish trend a few days ago after dropping below critical support at $2.58, along with a breakdown of an ascending trend line (which provided support over the past two months).

This breakdown was majorly led by a sudden drop in Bitcoin’s price (last Sunday), which appeared as an unusual move towards the much-anticipated halving.

Though the price is currently up by 8%, it is now facing a key resistance level at $2.58 that got broken on May 9. Tezos is likely to climb to near $2.89 (last week’s high) in case of a break-up, before resuming bearish action.

On the other hand, the recent breakdown might become a fake-out if Tezos regains momentum above $3 – April’s high.

As can be seen on the price chart, Tezos is struggling to climb back above the yellow ascending line, around $2.58. A successful climb should drive buying pressure to $2.89 and $3, as mentioned above.

If the selling pressure resumes, the first line of support lies at $2.375. The next level below is $2.06. Tezos could bottom around $1.88 support if the price drops further.

Considering the recent lower highs pattern, Tezos is likely to witness more downside action before full recovery takes place. For now, it’s essential to keep in mind that the correction has not finished yet. 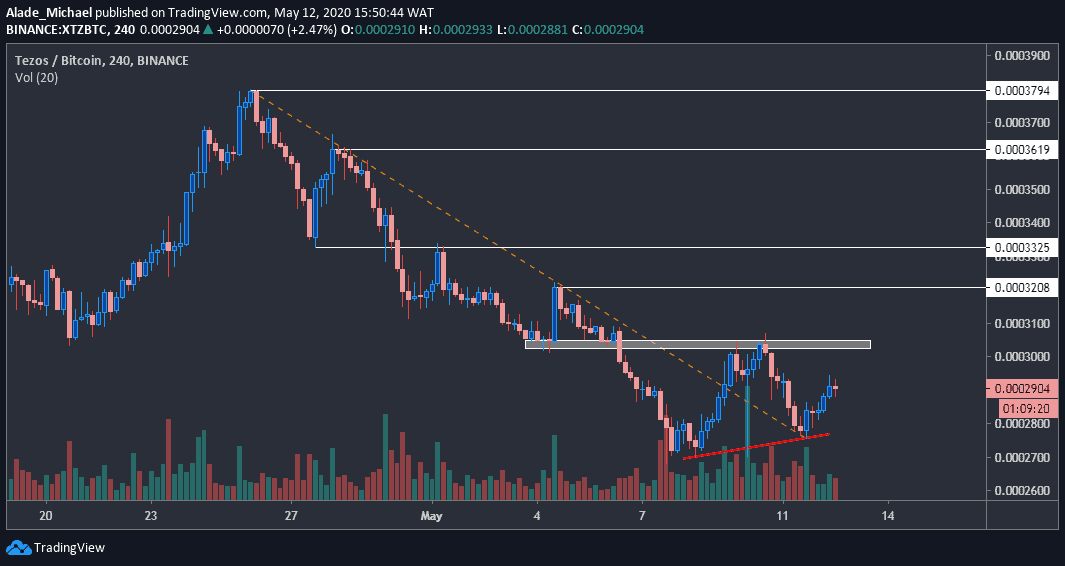 XTZ is starting to show bullishness after seeing a three-week decline against BTC, starting from the 37940 SAT level. The 3.55% increase over the last 24-hours has brought the current price to the 29040 SAT level.

After establishing support at 27000 SAT, the price increased and broke out from a descending trend line to 30550 SAT level, marked by grey on the above chart. Tezos pulled back and started a new price increase from the 27777 SAT level, which now formed a double-bottom pattern – that is bullish.

This bullish pattern would become valid if Tezos can surpass beyond the immediate resistance area of 30550 SAT. If it fails, the possible uptrend might be delayed in a sideways action until a price break occurs (if at all).

Once Tezos overcomes this mentioned resistance, the next major resistance to think of is 32080 SAT and 33250 SAT levels, shown in white. It may further increase to 36190 SAT resistance if buying pressure is developing.

The bullish signal would become false if the price drops below the initial support at 27777 SAT level, followed by the critical support at 27000 SAT level, the bulls’ last defense line from the past week (30-days low).

The post Tezos Price Analysis: XTZ Soars 8%, But Still Far From The Monthly Highs Around $3 appeared first on CryptoPotato.