Tezos is one of the most exciting projects in the cryptocurrency space. Similar to the Ethereum blockchain, Tezos allows developers to build assets and applications on its network. As the broader crypto market rallied, so did Tezos (XTZ), with the cryptocurrency’s price going up by nearly 400% from January to May.

However, with the decline in prices in recent weeks, investors and traders are curious about how XTZ and several other cryptocurrencies would perform. Read this post until the end to know the various ways Tezos would perform over the coming weeks.

Tezos is a blockchain network designed to host smart contracts. Although it has similar functions to the Ethereum network, Tezos wants its platform to offer something better. It wants its infrastructure to be more advanced than Ethereum. This implies that the Tezos blockchain can evolve and improve over time without risking a possible hard fork. This is why the Tezos blockchain is built as a Proof of Stake protocol. The XTZ holders vote on proposals for protocol upgrades submitted by the Tezos developers. This protocol is less energy-intensive than the Proof of Work protocol.

As an open-source platform, the Tezos blockchain tags itself as secure, upgradable and built to last. Furthermore, the smart contract language on the Tezos network provides the accuracy required for high-value use cases. According to the development team, the network’s approach is for the blockchain to be future proof and remain state-of-the-art for the long term. Hence, Tezos is open to embracing developments in the blockchain sector.

How has Tezos performed so far this year?

Tezos is currently the 49th largest cryptocurrency by market cap. The XTZ coin participated in the cryptocurrency market’s rally over the past few months. It began trading the year at $2 per coin. However, XTZ rallied by over 350% to reach a yearly high of $7.7 on 6 May.

However, the cryptocurrency market has been in a bearish trend in recent weeks, leading to XTZ losing over 50% of its value but it is still trading around $3.50 per coin at the time of writing, representing a 75% increase in value year-to-date. 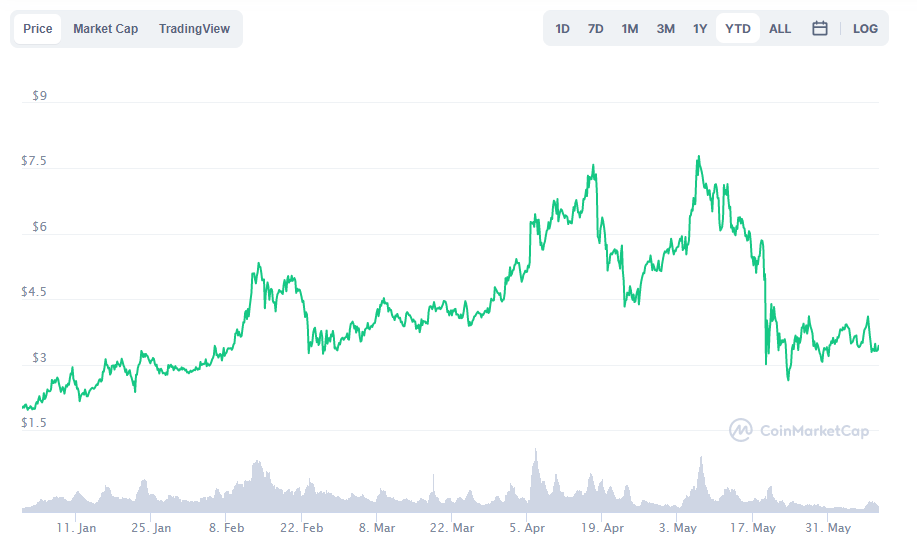 Although Tezos doesn’t match Ethereum at the moment, the blockchain has gained adoption in recent months. The blockchain is home to some of the leading NFTs, and with the market now expanding, more NFTs could be launched on the Tezos network. If the adoption could increase, Tezos’s price could benefit from it and rally higher in the coming weeks.

What are the Events that could affect Tezos Price in June?

Similar to the broader market, Tezos has been in a bearish trend in recent weeks. However, its price went up during this month, closing in on the $4 mark before losing momentum and dropping to the $3.5 level again.

Last month, Tezos partnered with Formula 1 team Red Bull Racing Honda. The partnership will see the racing team develop collectibles that could take advantage of Tezos’ scalable, efficient and self-upgrading network. With sports fans set to use the Tezos blockchain to purchase digital collectibles, the cryptocurrency’s price could benefit from it.

The Tezos blockchain is set to undergo a major upgrade soon. Nomadic Labs, a Paris-based R&D company, has proposed the Granada upgrade on the Tezos blockchain. If the upgrade is approved and implemented, the Granada update will change the current Tezos consensus algorithm Emmy+ with a new algorithm Emmy*. The upgrade will also come with other improvements such as liquidity baking and reduction in Gas consumption.

Furthermore, if the update is approved and implemented, it will generally halve the time between blocks from 60 seconds to 30 seconds, hence, making transactions on the Tezos blockchain faster. Cryptocurrency prices usually move higher in the event of a major upgrade. Hence, you could expect the XTZ price to rally higher if the upgrade is implemented.

Legendary musician Quincy Jones is set to release NFTs on the OneOf platform. This platform is built on the Tezos blockchain, and it has attracted a number of musicians. So far, artists set to launch NFTs on the platform include H.E.R., Jacob Collier, The Kid LAROI, Charlie Puth, Norwegian singer-songwriter Aurora, G-Eazy, TLC and Swedish DJ Alesso. John Legend, Doja Cat and others are also expected to launch their NFTs on the Tezos-based platform. With Tezos catching the eyes of artists thanks to its environmentally friendly protocol, the XTZ price could perform excellently over the next few weeks as the blockchain hosts some important NFTs.

Despite the wave of good news within the Tezos ecosystem, XTZ is still in a bearish mode, thanks to the mood of the broader market. XTZ is struggling to overcome the next resistance point at $4.40. If XTZ can surpass that level, then it would allow the bulls to regain control of the market again and push it towards the $5.8 mark, last seen on 20 May. 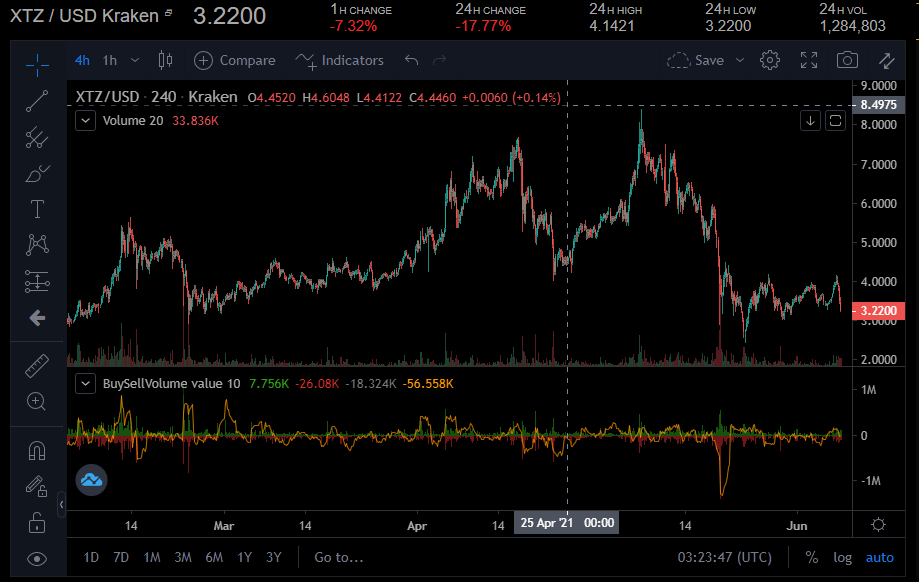 The NFT adoption news coming to the Tezos ecosystem could help push its price past the $4 mark over the coming days or weeks. However, if the mood in the general market doesn’t change to strongly positive, XTZ could lose momentum, and its price could be back to its current level.

Traders are optimistic about XTZ’s performance in the coming days and weeks. It could surpass the major resistance points at $4, $5.8, $6.5 and $7.3 if it embarks on a good rally.

Currently, XTZ is trading below its 30-day simple moving average ($3.55) and its 30-day exponential moving average ($3.53). Tezos’s RSI is also in bearish territory. With the technical indicators still in the bearish region, XTZ would have to perform excellently in the coming days to stand a chance to surpass the next resistance point at $4.01. Further support would be required from the broader market if XTZ is to attempt the $5.8 level again.

Further bearish sentiment within the broader market could expose XTZ to massive losses in the coming weeks. The XTZ/USD pair dropped to the $2.3 region a few weeks ago. While a massive sell-off seems unlikely at the moment due to the positive news in the Tezos ecosystem, the bulls have to ensure that they defend the $3.0 support level, allowing them to gain momentum and rally towards $5.8 in the coming weeks. Tezos would need help from the broader cryptocurrency market if it should attempt to reach its all-time high level again.

Chainalysis launched a program that would help government agencies store and sell forfeited cryptocurrencies. The blockchain intelligence and surveillance company…

With a 100% increase over the last day, BabyDoge is fast becoming the hottest crypto. Here’s where to get your…