Tezos’ price is looking to break to $2.80, and XTZ could join the altcoin party with a massive spike if bulls rally above $3.00. While the cryptocurrency currently trades near a major reload zone, a breakout will likely push XTZ/USD nearly 30% towards $3.55.

The cryptocurrency’s value has increased by about 12% over the past 24 hours and is currently trading at $2.74 at the time of writing. More than $468 million worth of XTZ has been traded in this period, pushing the Tezos market cap above $2 billion.

If the bullish divergence printed on the daily chart materialises, a massive upside could see Tezos’ market cap sore even higher.

Elsewhere, the crypto market is revelling in a $1 trillion valuation, achieved as Bitcoin crossed the $37,000 mark.  Several altcoins are aiming for the moon as optimism swells. 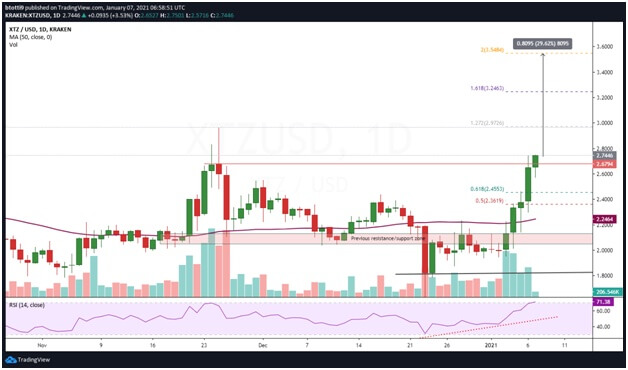 The Relative Strength Index (RSI) is showing a bullish divergence as it bids to cross into overbought territory. If bulls maintain the upside momentum and reach the $3.55 target, XTZ/USD will have surged by about 30% from current levels of $2.74.

On the downside, the first support zone is at the 61.8% Fibonacci level at $2.45. This is the initial reload zone, which could ease the dip to the 50-SMA at $2.23. If bears take charge and break the critical support line, XTZ/USD could drop to the previous resistance/support zone near $2.00. 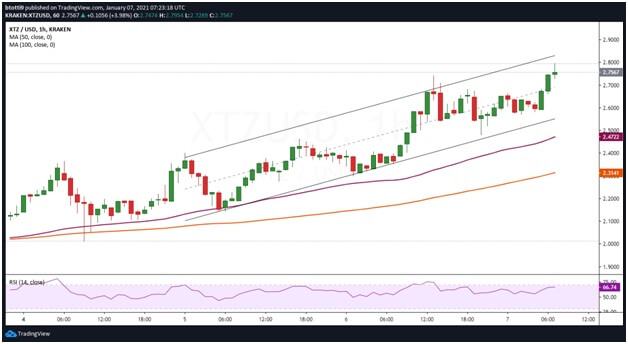 On the hourly chart, XTZ price is trading inside an ascending parallel channel, with bulls looking to test resistance at the upper boundary. If the attempt fails, the middle line of the channel provides immediate support at $2.70.