One of the most exciting things about the cryptocurrency market, in general, is that unexpected things tend to happen all the time. Just less than 24 hours ago one cryptocurrency token SPEC surged more than 4,700 percent only to lose all these gains almost immediately after that. Let’s look into it.

SPEC Marks 4700% Increase And Falls Right Back Down

According to data from Coingecko, the price of the SPEC cryptocurrency went through the roof, surging 4200 percent in less than a couple of hours. 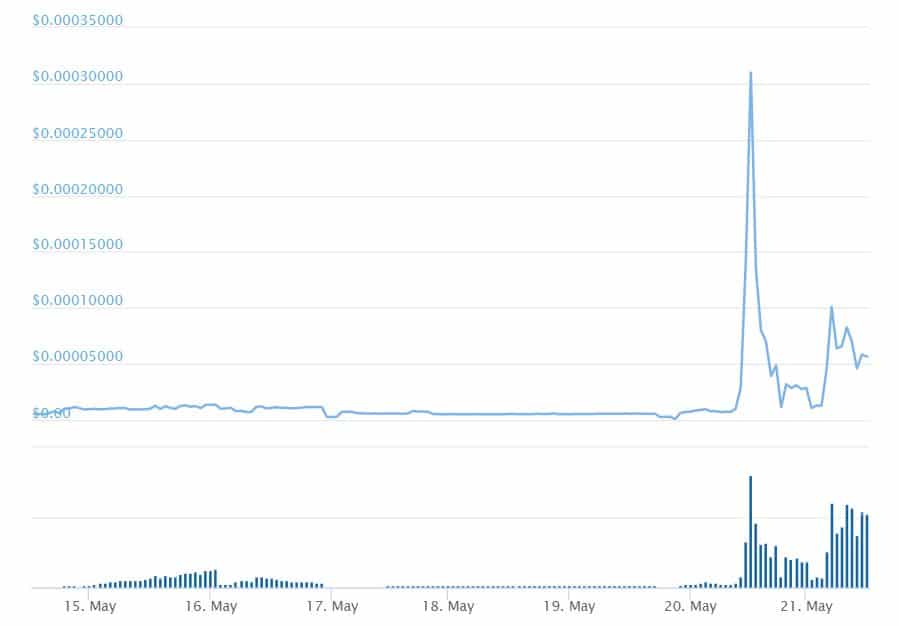 What Do We Know About SPEC?

SPEC is the native cryptocurrency of a project called Spectrum Network. As of the time of this writing, the official website seems offline. Their Telegram community is also virtually non-existent as there are only 31 members currently in the group.

The Spectrum Network had its ICO back in July when SPEC tokens were sold at a price of $0.003. We can see that the prices are well below that. Even after today’s 4700% increase, the price of SPEC is a lot less compared to the price during the ICO.

What Caused The Increase?

While it’s anyone’s guess to tell what caused this parabolic surge in SPEC’s price, it does look a lot like a classic pump and dump scheme.

This is a situation where individuals attempt to boost the price of an asset based on misleading, greatly exaggerated, or false statements. The perpetrators of the scheme usually tend to have an established position in the asset and attempt to sell it once the price skyrockets. Under securities regulations, this practice is illegal.

Of course, this is nothing but speculation because there is no hard data supporting anything of the kind.

The post What Caused Spectrum Network (SPEC) to Surge 4700% and Fall in Less Than 12 Hours? appeared first on CryptoPotato.

The top 5 cryptocurrencies of the last week

A bitter week for most cryptocurrencies is coming to an end. The Bitcoin price declined by around 14%. Most altcoins…

Crypto Trading Academy: What Is Open Interest In Bitcoin Futures And How Traders Use It?

Bitcoin futures contracts allow traders to speculate on the price of Bitcoin without necessarily have to own it. They are…